Hubby and I are on our way home from visiting friends and family in Georgia and Florida. Next week I'll share some pictures and stories with you from our travels. But since I'm still on the road, I'm posting an excerpt from Her Royal Masquerade, book 1 in my Her Royal Romance series. 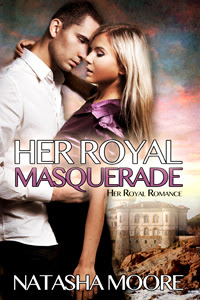 Mia’s skin tingled as Vittorio continued to play with her hair and softly brushed her face with his once again. They were barely moving, not doing much more than swaying in each other’s arms to the rhythm of the music. His breath was warm along her cheek. He murmured a few words she didn’t recognize. Soft words with a silky, sensual feel to them, just like the lips that were now teasing along her jaw line.

Her breath caught when his lips found hers. He drew them lightly across hers, not a real kiss, but the hint of one, the promise of more, if only they weren’t in the middle of a crowd. Mia shifted in his arms, moving her body against his. She found his hard erection and her body softened, moistened.

What was she doing?

“Of course.” Vittorio wrapped his arm around her waist and the couples on the dance floor stopped and parted for them. He led her to a French door in a bank of floor-to-ceiling windows that opened onto a softly lit patio.

Mia rushed over to the waist high railing constructed of rough-hewn stone like the rest of the palace. Darkness had fallen while she’d been inside. Lights from the towns around them sparkled below. Stars in the inky sky twinkled above. Once again she had the feeling of stepping into a fairy tale.

Hearing her cousin’s name fall from Vittorio’s lips was like a handful of snow smacking her in the face. Of course. She had to remember she wasn’t Mia Holmberg tonight. She’d almost forgotten she was playing a part.

By Natasha Moore at March 31, 2014
Email ThisBlogThis!Share to TwitterShare to FacebookShare to Pinterest
Labels: excerpt, Her Royal Masquerade, Her Royal Romance, Natasha Moore