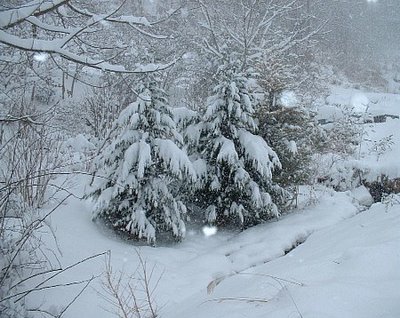 I hope all of you are having a wonderful holiday season. Here are some photos I took along with a few quotes to bring you a smile.

What do you call people who are afraid of Santa Claus? Claustrophobic. -Unknown

Mother decided that 10-year-old Cathy shoud get something "practical" for Christmas. "Suppose we open a savings account for you?" mother suggested. Cathy was delighted. "It's your account, darling," mother said as they arrived at the bank, "so you fill out the application." Cathy was doing fine until she came to the space for "Name of your former bank." After a slight hesitation, she put down "Piggy." 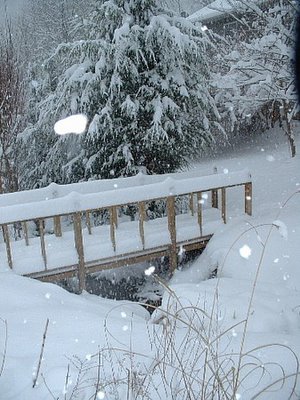 There was the little boy who approached Santa in a department store with a long list of requests. He wanted a bicycle and a sled, a chemical set, a cowboy suit, a set of trains, a baseball glove and roller skates. "That's a pretty long list," Santa said sternly. "I'll have to check in my book and see if you were a good boy." "No, no," the youngster said quickly. "Never mind checking. I'll just take the roller skates."

I wish we could put up some of the Christmas spirit in jars and open a jar of it every month. ~Harlan Miller

A three-year-old gave this reaction to her Christmas dinner. "I don't like the turkey, but I like the bread he ate." 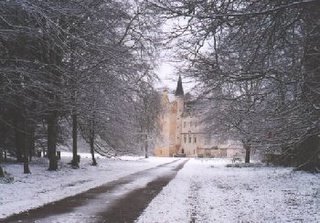 I've been in a movie-watching mood lately. I think the cold weather and long nights caused it. I'm going to rate the movies I've seen lately on a scale of 1 to 5. (My thoughts and opinions only, which probably aren't even worth two cents.)

Christmas with the Kranks: 3, good but I'd expected it to be better. I think it was the characters' motivations I wondered about.

The Notebook: 4 or 3, really well-done movie but heart-wrenching. It evoked all kinds of emotion in me, unfortunately it was the sad/depressed/nostalgic/heartbroken kind of emotion which I had to drive away a couple days later by reading something uplifting. I really don't deal well with movies like this. I'm sure it will become a much-loved classic, but I can never watch it again. This is why I write romance with the happy ending.

The Truman Show: 5, interesting! I like most Jim Carey movies (with the exception of a couple). He does a great job getting into character.

Bewitched: 4, I like Nicole Kidman. Probably because I'm a writer, I noticed the beginning of her GMC (goal, motivation and conflict) was so clear I could've drawn a diagram.

The Whole Ten Yards: 2, what is it with all these hired assassin movies? Is assassin now the highest 'high concept' in Hollywood? I liked that it was unusual and quirky.

Ladykillers: 4, I liked it a lot. Very unusual, interesting movie. Talk about contrasts! The group of characters were all over the map. Surprise ending too. Definitely held my attention.

The Prince and Me: 4, I enjoyed this romance, though it seemed more targeted at a teen audience. It was very much like a modern day fairy tale. I liked the characters.

Mr. and Mrs. Smith: 5, truly loved it! I've heard others say they didn't care for it because of lack of characterization. I interpreted this aspect as that they were going for subtlety and didn't want to give away too much up front. I found the big fight scene hilarious. I felt guilty enjoying that magnitude of domestic violence. The whole movie was like a train wreck waiting to happen. I'll probably have to watch it again.

Deuce Bigelow European Gigolo: 2, silly but it was good for a laugh or two. I chose it for my husband because I know he likes that type movie. We are totally opposite in sense of humor.

Jersey Girl: 4, I enjoyed this movie but the first 45 minutes or so are heartbreaking and will make even an ice queen cry. Jeez! But the middle and end were both funny and touching.

Please forgive any misspellings or opinions you don't agree with. If you've seen a great movie recently, please recommend it.

What does the above photo of a Scottish castle have to do with the movies I've watched? I have no idea, except . . . wouldn't this be a great place for a movie to be set? Or a book. Yes, definitely a book. :-)

Here is a funny Christmas quote I found. "There is a remarkable breakdown of taste and intelligence at Christmastime. Mature, responsible grown men wear neckties made of holly leaves and drink alcoholic beverages with raw egg yolks and cottage cheese in them." ~P.J. O'Rourke
By Vonda Sinclair at December 16, 2005 2 comments:
Email ThisBlogThis!Share to TwitterShare to FacebookShare to Pinterest
Vonda Sinclair
Vonda Sinclair writes Scottish historical, paranormal and contemporary romance. 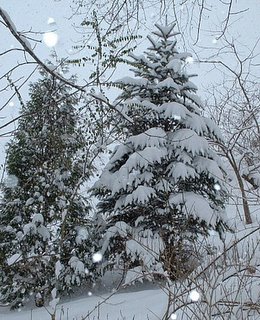 We watched Christmas With The Kranks a few nights ago. Since my house doesn't look like Little Las Vegas, I feel like a Scrooge. It's not that I don't love plenty of lights and decorations, truly I do... if they're done right. But it takes a lot of time and work to decorate that much. I've never been on my roof and not sure I could drag a huge ceramic snowman up there. Why rip off your shingles and risk your life for no good reason? Besides, isn't Santa supposed to stand beside the chimney instead of Frosty? (I really don't get that.)

Another reason I don't put up a lot of decoration, is that it can quickly degenerate into tacky. I'm sorry but I don't like tacky. I also don't like those huge blow up characters people put on their lawns or porches. (If you have one, I'm sorry.) Yes, I'm sure kids love a green Grinch dressed as Santa who is twenty feet tall. But what about grown-ups? I say we deserve decorations we like too.

I put my two small topiary-style lighted Christmas trees on either side of the steps on the porch. They are in pretty flower pots. Beside the door I have my grapevine wreath wrapped in red berries. I even gave my cement grape lady a red tinsel boa. That might be a little overboard, but the "goddess of wine" looked cold standing there wearing nothing but her cement smock. Oh, and how's this for tacky? I stuck a big candy cane by the mailbox. No, not tacky... playful is a better word I think. :-) As for inside the house, I like mantel decorations such as strings of "candied-fruit" or garlands of poinsettia and raffia along with velvet and tapestry stockings.

I love big Christmas trees, but boy do they eat up the time. An hour or three setting up and decorating, and the same taking down. Someone should invent already decorated trees for people like me who need to be writing instead of decorating. Fresh, real trees are the best. Smell very nice, but I couldn't justify the expense year after year. Also, as a gardener, I couldn't bear being a part of all those cute little trees dying. Perhaps that makes me a scrooge. Hope not. I have an artificial "pencil tree" which is slim and fairly tall. It fits more easily in our smallish living room. It also has a natural and elegant look to it. Speaking of elegance, my favorite "ornaments" are hydrangea blooms. I grow them and dry them in the attic. I choose smaller ones and then spray them burgundy. They look so nice in the tree with the other ornaments. Burgundy is my favorite Christmas color. You can keep your red and green. Give me burgundy... and a little gold. :-)

Above is a photo of one of our live Christmas trees from years ago, the only one that survived. Poor thing. He's had a hard life. :-) 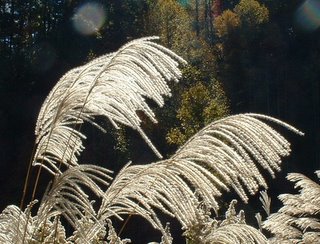 I've been writing short stories for the past week or two and realized how much I dislike writing the first rough draft of anything. It's a very uncomfortable time for me. It's messy, sketchy. I only have a general idea of where I'm going. It's like walking through the darkness without a flashlight. The only light is the quarter moon. I see the general shapes of things around me. I might trip over a root, smack my forehead into a tree trunk or step in a deep hole. Half the time I'm crawling. And all I want to do is hurry and get through this uncomfortable phase so I can move on to my favorite stages of writing, 2nd draft through polishing. My rough drafts of novels tend to be very short, and like I said, sketchy, maybe 50 pages when the entire book will be 300 - 400 pages. They consist mostly of dialogue and a few actions. Sometimes a scene is one line. So and so will do such and such here. I'll figure out how later. When I get that rough draft done...whew! Now, 2nd draft, I can REALLY get into the story and have some fun. Now I can get in FLOW. This is when hours seem like minutes and I'm transported to another world. This happens for me whether it's a 10 page short story or a 450 page novel. As writers, we must discover our process and accept it, even if we wish parts of it could be different.
By Vonda Sinclair at December 01, 2005 2 comments:
Email ThisBlogThis!Share to TwitterShare to FacebookShare to Pinterest
Vonda Sinclair
Vonda Sinclair writes Scottish historical, paranormal and contemporary romance.
Newer Posts Older Posts Home
Subscribe to: Posts (Atom)