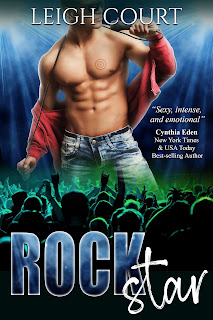 And more to tempt you...
By Jenna Ives at February 04, 2021 No comments:
Email ThisBlogThis!Share to TwitterShare to FacebookShare to Pinterest

Gotta give a shout out to my buddy Leigh Court on her new release, Rock Star! It's an awesome read (and I should know, being the rock & roller of the two of us)!

Rock singer Sebastian Roe was shot onstage during a concert five years ago, leaving him with a deep fear of performing. But his love of music is too strong to keep him off a stage forever, despite the fact the police never caught the gunman. He’s just announced a new U.S. tour, but his performance anxiety is putting the shows in jeopardy.

New York City therapist Mia Merrill was in the audience the night of Sebastian's fateful concert. She loves his music and wants to help him overcome his PTSD, but there's another reason she's determined to become his therapist -- She's the reason he was shot.

Driven by guilt and a need to atone, Mia takes Sebastian on as a patient. Forbidden romantic sparks fly between the two during their therapy sessions, but no sooner do they start to make progress on Sebastian's stage fright than the gunman announces he's back to finish the job.

The roar of the audience echoing in his ears, the wail of Nick’s guitar making his body vibrate, the pounding of Trevor’s drums pulsing like a living heartbeat.

In concert, Sebastian gave every ounce of energy to his fans, every drop of sweat, everything he had. They loved him for it, and he fed off that love. Hell, he mainlined it. It was a beautiful symbiosis, like a massive orgasm shared with thousands of people.

And this moment of anticipation before each song started was like delicious foreplay, a breathless excitement that danced along his nerve endings.

The first recognizable notes of “I Can’t Live Without You” launched into the air and the roar of the crowd became thunder. A solid wall of sound. Even with his in-ear monitor, Sebastian could hardly hear Nick’s guitar to listen for his cue to start singing. But he knew this song as well as he knew his own name so he strutted to the front of the stage, throwing open his arms in a show of embracing them all. Every single person out there in the audience.

The roar got even louder.

“The sands of time run through my hands, my dreams and hopes and all my plans,” he crooned, his voice intentionally cracking to convey the sad emotion of the song. “I can’t live without you.”

It was his biggest hit. But more than any of his songs, Sebastian’s favorite music was the sound of the crowd’s deafening approval. He wasn’t disappointed now.

He grinned widely, and then suddenly felt an odd sting in the vicinity of his left shoulder. It pushed him back on the stage a few steps, as if a ghost had just shoved him. Weird. He looked around, but clearly nobody else was onstage except him and the band.

The sting became a burn, but he ignored it. Had he just pulled a muscle? No time to deal with it now. He straightened and then noticed a commotion in the seats near the front of the stage. A fight, maybe. People were running, shoving each other, climbing over chairs.

Whatever the problem, the band knew enough to keep playing. Sebastian took a breath, readying for the next verse, but he was distracted by an odd warmth now spreading across his chest. He looked down and tried to make sense of what he was seeing – a stain on his shirt where he’d felt that stinging burn. As he watched, the stain got larger. It was a dark shade of red.

It was blood. His blood.

His head started to spin and he sank to his knees. The wail of Nick’s guitar stopped. The pounding of Trevor’s drums stopped. Everything went eerily quiet in a venue built for sound.

Sebastian felt of the heat of the spotlights still trained directly on him, and as his vision began to fade his last thought was that he’d lived his life on a stage and tonight he was going to die on one.

The book is available at all outlets, but here's a quick link to amazon:  https://amzn.to/3j02bBV And here's her website, with links to all other outlets where you can buy the book: www.leighcourt.com.

You will fall in love with Sebastian Roe from the first page!