A workshop a day

Today I'm going to recommend something I enjoy very much... RWA national conference workshop CDs. The 2005 conference is on 3 CDs in MP3 format. They contain tons of workshops, well over a hundred. Maybe 150. This is the 2nd year I've bought them from Bill Stephens Productions ( billspro.com ) and they are worth the money, which is only about 1/8 the cost of the same workshops on tape. The CDs have a printable table of contents, 10 pages. I printed this out and I look through it and decide which workshop I'm in the mood for that day. I use a portable CD/ MP3 player with a headset. I walk for about an hour, outside in the fresh mountain air, or take my mind off cleaning, washing dishes or folding laundry by learning some aspect of writing (and being virtually transported to a workshop in Reno.) Though I'm not a beginner, it never hurts to review many aspects of craft. I feel the more I listen, the more I will absorb it. I have a thirsty mind. I am usually pleasantly surprised at how good the workshop is and I often learn new information or ways of looking at writing or the publishing industry.
By Vonda Sinclair at October 27, 2005 2 comments:
Email ThisBlogThis!Share to TwitterShare to FacebookShare to Pinterest
Vonda Sinclair
Vonda Sinclair writes Scottish historical, paranormal and contemporary romance.

What makes a scene necessary?

As I'm doing my revision one of the main things I have to look for are unnecessary scenes. Why would anyone (why would I) write unnecessary scenes in the first place? Hmm. Something to ponder. So I as I'm revising, I run across a scene that I LOVE because it has lots of sexual tension in it. But if I removed the scene would the book as a whole suffer? Nope. Sadly.

So I go searching through my books on writing, looking for references to scenes and what makes them necessary or not. I am frantic to save this scene from the scrap heap. I glance through GMC: Goal, Motivation and Conflict by Debra Dixon. (One of the best books ever for fiction writers and I highly recommend it.) I discover that a scene needs to have 3 reasons for existence and one of those reasons should be either showing progress toward a goal, strengthening / changing motivation or conflict with opposing forces. She then goes on to say the other 2 reasons for a "scene can be anything you want." An example from the book is showing "sexual tension." Whew! I have one good reason for my scene. Another is "foreshadowing" which this scene is doing. In addition, I found 2 more reasons. I do have some conflict in the scene between the hero and heroine. But I can intensify the conflict if I bring in a secondary character. I’m confident this will fix the problem, and allows me to play up those other 5 reasons for having the scene. Plus it connects a previous event and a one that happens later in the book.

Upcoming are more weak scenes that I must whip into shape. Or cut. I confess I got distracted by the celebration going on. Imagining how people celebrated a certain holiday in the Highlands four hundred years ago is difficult. I wanted my research to be accurate and unfortunately my other story elements fell by the wayside as a result. What was I thinking? I still need conflict, tension and all that other meaty, page-turning stuff. Brainstorming is my preferred method of dealing with problems such as this. I can do it. Not to worry. :-)

Above is a picture I took of the mountains last fall.
By Vonda Sinclair at October 24, 2005 2 comments:
Email ThisBlogThis!Share to TwitterShare to FacebookShare to Pinterest
Vonda Sinclair
Vonda Sinclair writes Scottish historical, paranormal and contemporary romance. 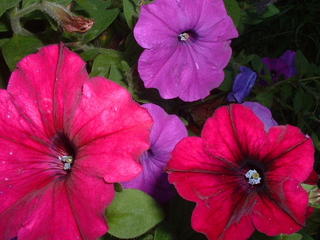 I'm so sorry I've been neglecting my blog. I have a good excuse. I got my first revision request. Woohoo!! How does that feel? Amazing, thrilling and terrifying all at once. So that makes two firsts in one month. (First 1st place in a contest and first revision request.) Oh and another thing, one of the recipes I contributed to my local chapter's (Smoky Mountain Romance Writers) fundraiser cookbook is going to be made on TV. A lady from our chapter who lives in Knoxville, where the show (Style) is taped, will be making the dish-- Southern Sweetheart (Sweet potato pie). I hope it turns out well. I can't get the station since I live over 100 miles away in NC. But what great publicity that will be for our chapter. Maybe we will sell lots of cookbooks as a result. Please visit www.smrw.org to learn more about the chapter or to buy a cookbook. It's filled with romantic, indulgent, decadent recipes.

In other news I learned that my Scottish historical, My Fierce Highlander, placed second in the Golden Gateway competition. Woohoo! I feel really good about that since there were five finalists and dozens of entrants.

Here’s one of the last pictures of my flowers for this year. The forecast says snow in higher elevations (where I live) for tomorrow night. Eeek! I can’t believe how quickly summer left and winter is arriving. Back to revisions. Everyone, have a great weekend!
By Vonda Sinclair at October 22, 2005 2 comments:
Email ThisBlogThis!Share to TwitterShare to FacebookShare to Pinterest
Vonda Sinclair
Vonda Sinclair writes Scottish historical, paranormal and contemporary romance.

Here are a few things to think about. I don't know who complied this list.

Can you cry under water?


How important does a person have to be before they are considered assassinated instead of just murdered?


Why do you have to "put your two cents in".. . but it's only a "penny for your thoughts"? Where's that extra penny going to?


Once you're in heaven, do you get stuck wearing the clothes you were buried in for eternity?


Why does a round pizza come in a square box?


What disease did cured ham actually have?


How is it that we put man on the moon before we figured out it would be a good idea to put wheels on luggage?


Why is it that people say they "slept like a baby" when babies wake up like every two hours?


If a deaf person has to go to court, is it still called a hearing?


Why do people pay to go up tall buildings and then put money in binoculars to look at things on the ground?


Why do doctors leave the room while you change? They're going to see you naked anyway.


Why is "bra" singular and "panties" plural?


Why do toasters always have a setting that burns the toast to a horrible crisp, which no decent human being would eat?


If Jimmy cracks corn and no one cares, why is there a stupid song about him?


Can a hearse carrying a corpse drive in the carpool lane?


If the professor on Gilligan's Island can make a radio out of a coconut, why can't he fix a hole in a boat?


Why does Goofy stand erect while Pluto remains on all fours? They're both dogs!


If Wiley E. Coyote had enough money to buy all that ACME crap, why didn't he just buy dinner?


If electricity comes from electrons, does morality come from morons?


Do the Alphabet song and Twinkle, Twinkle Little Star have the same tune?


Why did you just try singing the two songs above?


Did you ever notice that when you blow in a dog's face, he gets mad at you, but when you take him for a car ride; he sticks his head out the window?
By Vonda Sinclair at October 11, 2005 3 comments:
Email ThisBlogThis!Share to TwitterShare to FacebookShare to Pinterest
Vonda Sinclair
Vonda Sinclair writes Scottish historical, paranormal and contemporary romance.

OH THE BELLS IN CAROLINA ARE RINGING
AND OUR GOOD FRIEND VONDA IS SINGING
VIXEN'S VOTING IS IN
MY HIGHLANDER DID WIN
CAN YOU SEE THE CARTWHEELS THAT I'M SPRINGING?
HA! HA! HA! THE MAD LIMRICKER

That from my good friend and fellow chapter mate, Kerri, the Mad Limricker. When someone has good news, she creates an original poem for them. How special is that!?! We love it! Thanks, Kerri!
By Vonda Sinclair at October 07, 2005 2 comments:
Email ThisBlogThis!Share to TwitterShare to FacebookShare to Pinterest
Vonda Sinclair
Vonda Sinclair writes Scottish historical, paranormal and contemporary romance.
Newer Posts Older Posts Home
Subscribe to: Posts (Atom)