Here is a famous Scottish song, words and music: Roy Williamson (1936-l990.) Originally performed by the Corries, which is recorded and sung by many now, including Hunting McCleod who performed at a recent Highland Games I attended. "As with a number of other Scottish patriotic songs, the lyrics commemorate the defeat of Edward II at Bannockburn in 1314." Modern History Sourcebook

Scotland's (unofficial) National Anthem. The Flower of Scotland is the official anthem of the Scottish Football Team and the Scottish Rugby Team.

To hear a midi or wav version of this song please
click here .
By Vonda Sinclair at November 22, 2006 No comments:
Email ThisBlogThis!Share to TwitterShare to FacebookShare to Pinterest
Vonda Sinclair
Vonda Sinclair writes Scottish historical, paranormal and contemporary romance.

Have you noticed all the movies and TV shows recently that employ some sort of time alteration? The movie The Lake House and the new TV series "Daybreak" are two I've recently watched. I've also written two time-travel stories (a novel and a novella.) Why are we so fascinated by the ability to alter time? Because it's probably impossible and we can't resist a challenge? Because we all secretly wish we could travel forward or backward in time temporarily to see what things would be like, or maybe to change something? What a great way to do research, huh?

"Daybreak" is similar to the movie of several years ago, Groundhog Day, in which the same day keeps repeating over and over until the main character "gets it right," changes, or does whatever he is supposed to do to set things straight. Groundhog day, a comedy, was one of my favorite movies but I know people who hated it and even thought their VHS tape was defective, because they couldn't understand why the character always woke up in the same place at the same time. Daybreak is a bit different in that there's nothing funny about it. It's serious drama, action, and suspense.

The main character, Detective Brett Hopper, played by Taye Diggs, is a policeman who is being framed for the murder of an assistant DA. If events play out as they do in the original day, he is quickly arrested and thrown into jail. And his girlfriend murdered. If he doesn't confess to the murder of the assistant DA, his sister and her two children will be killed as well, the bad guy promises. So he must prevent himself from being arrested, save his girlfriend's life and do a lot of other stuff before things are set right.

One unusual and interesting element is that if he sustains an injury, like a gunshot wound, he still has the injury on the next repeat day. (But no one else does.) So that means that everything is not as it was before. Thus far, a few variations of the day have played out, all very different and interesting. I can foresee lots of plot twists and turns being used as he tries to gain control of this day, the worst day of his life. This has all the elements of great fiction. The advice of "throw as many stumbling blocks in front of your character as possible" has been employed with a vengeance. This is a fantastic series, and can't wait to see the next episode.

As for the movie, The Lake House, staring Keanu Reeves and Sandra Bullock, I highly recommend it as a great romantic movie. The time element is different from anything I've seen and boils down to a magical mailbox which sends letters through time. (The USPS is not involved.) The main characters live and fall in love two years apart but these two alternate realities are going on at the same time. It's very emotional and has a couple twists I didn't expect. You can see the movie trailer here... http://thelakehousemovie.warnerbros.com/
By Vonda Sinclair at November 17, 2006 6 comments:
Email ThisBlogThis!Share to TwitterShare to FacebookShare to Pinterest
Vonda Sinclair
Vonda Sinclair writes Scottish historical, paranormal and contemporary romance. 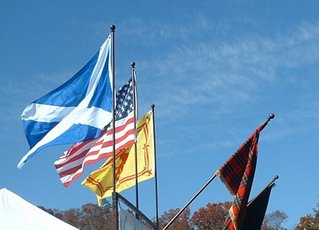 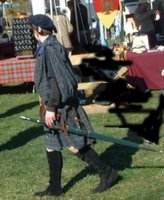 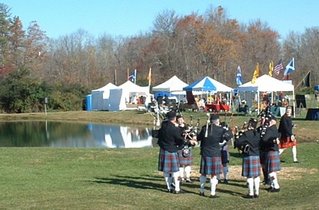 I went with a friend to the local Foothills Highland Games www.scotsfoothillshg.org over the weekend. It was a smaller Games but still wonderful, and actually better without the major crowds seen at bigger Highland Games. It was fun watching the athletes competing in the caber toss, hammer throw, tossing the sheaf, and bonny knees contest. :-)

A great Celtic rock band from Canada performed, Hunting McLeod www.huntingmcleod.com . They really know how to rock and I enjoyed their sound mucho. Here is what their website says about them: "Hunting McLeod's traditional bagpipes and fiddle transform into a new evolution of Celtic sound and powerhouse rock when mixed with electric guitar, bass and drums."

Two of my favorite kinds of music combined! What could be better?? See, more proof I have lots of Scottish blood in me veins. (I'm also a member of the MacNaughton Clan Association.) The Games also featured marching bagpipe bands. I love the sound of bagpipes.

Oh and did I mention, lots of men in kilts! The main reason to go, of course. ;-) One thing I've noticed is that the first few times I went to Highland Games, the men in kilts were kinda weird, you know, like something unusual and odd you want to stare at. But I'm finding the more I see men in kilts, the more normal they seem and even more attractive than they used to be. Men who don't wear kilts often make fun of men who do, but take note--women find men in kilts very sexy, so you guys, go out and buy kilts (and actually wear them) if you want to please your women. ;-) Has my husband ever had one on? Never! But he doesn't make fun of men who wear them, cause he knows I would object, considering the number of my (hot, yummy, alpha) heroes who wear kilts.

Also interesting at the Games, men who carry around big swords and targes (shields). Perhaps they're replicas but still attention-grabbing. I always like to observe how they're being carried, especially since these are the things I write about on a normal day in historical-romance-dom. I've also written two novellas that begin at Highland Games, so it's a favorite setting for me.

Lots of vendors were selling everything at the Games from silver Celtic knot earrings (one of my favorite things) to meat bridies with flaky crusts and fresh squeezed lemonade. Oh, and amazing kettlecorn. It was cold and the wind blew a lot so I had to wear my coat and hood most of the time. Not very sexy nor Scottish, but I stayed warm. :-)