Kilchurn Castle in Argyll sits in a beautiful location at the head of scenic Loch Awe. The first time we visited was blustery, gearing up for the terrible wind storm that came the next day. To get to Kilchurn Castle you must walk a few hundred yards across a (sometimes) boggy area. The gravel and dirt trail is good, but in places you may find yourself walking through water a few inches deep, especially in spring. Our second visit during September was much drier and we didn't have a problem.


On our second visit just over a year later, it was a sunnier, warmer day.

Kilchurn Castle has no entrance fee and no one working there (at least that was the case a couple of years ago.) The property is in the care of Historic Scotland. When we've been, there have been very few others visiting, which is nice because you can have quiet time to absorb the feelings of the place and the history. 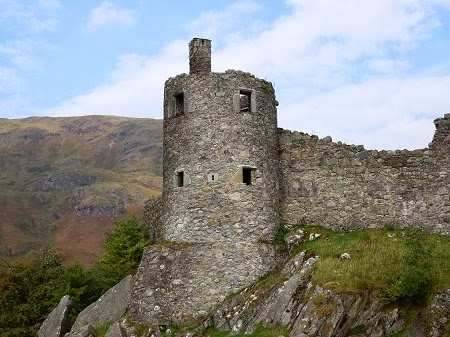 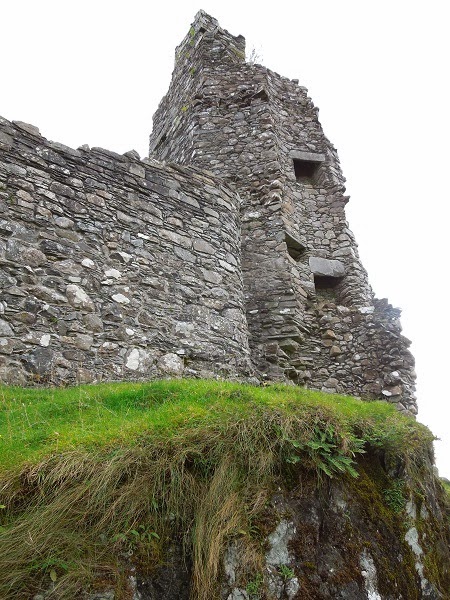 This is quoted from the sign and display in Kilchurn Castle’s great hall.

“The tower-house is the earliest surviving part of the castle, and would have been the residence of its builder, Sir Colin Campbell, 1st laird of Glenorchy. When first built, sometime between 1440 and 1460, the principal means of access would have been through the door to your right, reached up a flight of steps from the courtyard. This led directly into the hall, or large dining room.

"Few of the original features of the 15th-century hall now survive, and the reconstruction of it can therefore be only speculative. All trace of the great fireplace has now gone. But in the far wall, the position of four doorways can still be seen. The outer two of these opened into small closets or chambers, each barrel-vaulted and provided with a latrine; the latrine for the one to the right was entered through the door next to it, and up a short flight of steps. The left hand centre door led down another flight of steps into the cellar below. It was probably up this stair that food and drink were brought in the hall.

"The upper floors of the tower were reached by a staircase inside the right-hand wall, which was entered through a now vanished door somewhere to the right of the principal entrance. At second-floor level there were two chambers, from which separate staircases led up to another two on the third floor, and (after 1550) another two in the garret below the pitched wooden roof. 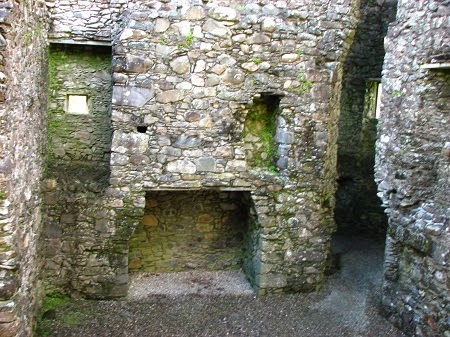 "The tower-house would have been too small to have accommodated any more than the owner and his immediate family. Between 1475 and 1575, therefore, Sir Colin’s son, Sir Duncan Campbell, built a more spacious hall in the courtyard below, to which other buildings were later added."

Carved above Kilchurn's main entrance are the arms and initials of John, 1st Earl of Breadalbane (great-grandson of Black Duncan) and his wife Countess Mary Campbell. A stone carrying the initials of Black Duncan (SDC for Sir Duncan Campbell) is displayed in the barracks." (Below) 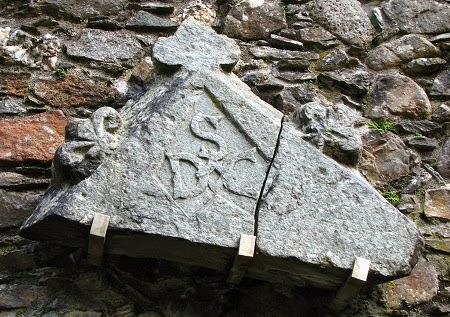 In 1681 Sir John Campbell of Glenorchy was made the First Earl of Breadalbane and in the 1690s converted the castle into a barracks capable of housing up to 200 troops. 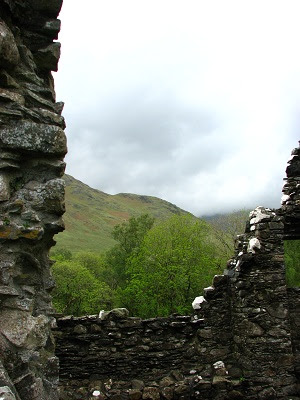 The mountains surrounding the castle are gorgeous and green. 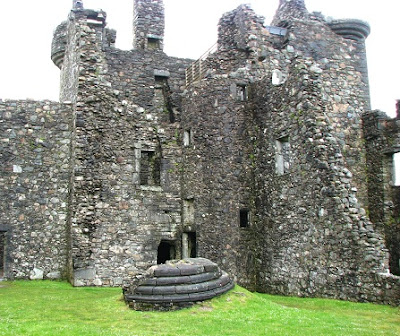 When Kilchurn was built, it was on an island barely larger than itself. This information was discovered on a map from the 1500s. Later, the level of the loch was lowered.

During the 1715 and 1745 Jacobite Rebellions the castle was a government garrison. The Campbell family left the castle many years earlier and moved to their estate in Perthshire. In 1760 lightning damaged the castle and it was abandoned. Above you can see the top of the tower where it fell off (or was knocked off by lightning) and landed upside down in the courtyard. 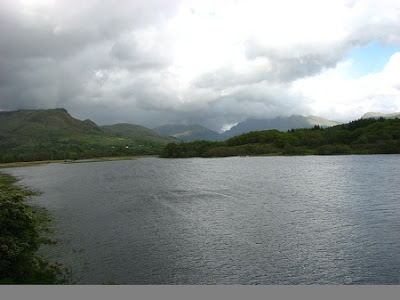 View from the top of the castle tower out over Loch Awe. 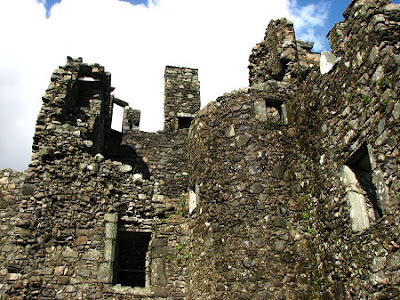 "A keen poet, Sir Duncan, 2nd Lord of Glenorchy, was patron of The Book of the Dean of Lismore. Known as Leabhar Deathan Lios Moir, the volume contains Gaelic and Scots verse and is now considered one of the treasures of the National Library of Scotland. Sir Duncan, who was killed at the Battle of Flodden in 1513, contributed nine humorous poems to the book, including a caustic satire about women."

"Visitors to Kilchurn were entertained with music and Gaelic poetry in the great hall… The richly-decorated room reflected the high status of their noble hosts." 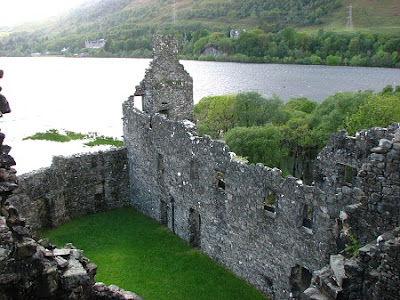 More views from the top. This one shows the barracks. 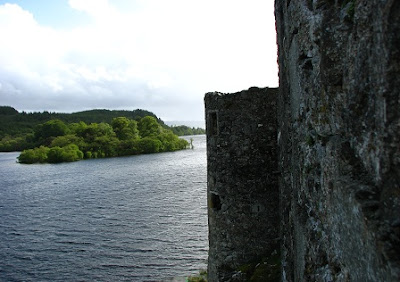 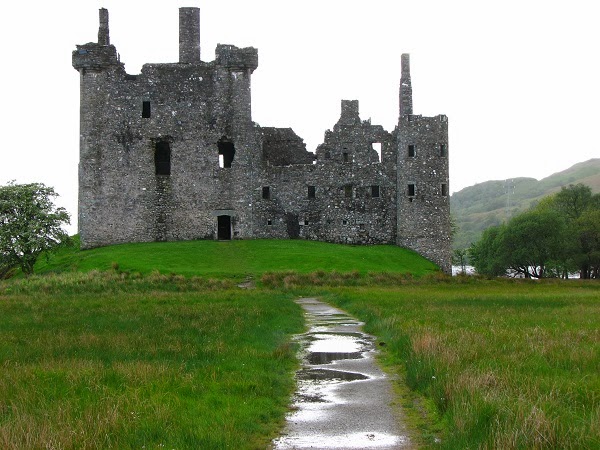 "Child of loud-throated War! The mountain
Stream Roars in thy hearing; but thy hour of Rest
Is come; and thou are silent in thy age."
From "Address to Kilchurn Castle, Upon Loch Awe," William Wordsworth, 1803

Hope you enjoyed this visit to Kilchurn Castle. :)
Thanks!
Vonda

How beautiful and haunting. Thank you for sharing.

Thanks for checking it out, Miriam!!

Your photos are gorgeous. Thanks for sharing.

Thank you so much, Lea!!

What a fantastic post! The photos were just breathtaking and the text you provided, wonderful. Made me want to be there--right now :) Tweeted/shared. Barb Bettis

I love your photos. The castle is stunning. Tweeted.

Vonda,your pictures are so beautiful. For those of us who have not yet been, it was wonderful to see pictures and read the information you shared. Thank you. The green always looks so green.

Loved the visit! Thank you for sharing. It's so beautiful and haunting.

Love this post, Vonda. Your photos are amazing. I've visited Kilchurn many times, and this brings it all back to me so clearly. My first book, Child of Awe is set mostly at Kilchurn, which is why I love your history of the place. Great post!

Barbara, thank you! I'm thrilled you enjoyed it! I'd like to be there now too. :)

Thanks, Ella! It truly is a stunning location.

Debbie, Lou, thanks tons! Yes, the green in Scotland is extra vibrant, especially in May and June. I hope you get to go soon.

Lani, thanks for checking it out! You're right, it's a beautiful, haunting place.

Kathryn, thanks so much! I have your book in my Kindle TBR stack. Can't wait to read it. It must have been amazing using Kilchurn as a setting.

So much stone! What craftsmen they must have been! Lovely photos, Vonda, as usual. I always enjoy 'visiting' Scotland with you.

I agree, Pat. They must have been great craftsmen. Thanks! So glad you enjoyed it!

Wow! So interesting. Loved your post...I feel as though I visited the castle myself! Thank you for sharing...

Thanks Lane! I'm so glad it was almost like a visit!

Amazing! The pictures are so vivid. Thank you for sharing.

Thank you so much, Collette! I'm glad you like the pics!

Very beautiful photos and informative. Thanks

Thank you so much, Brenda, Sasha, and Amy! I'm so glad you enjoyed it!!

Beautiful, Vonda. What a great sense of history you have shared with us. Thank you!

Thank you so much, Paisley! I love sharing my pics and learning the history of a place.