While most people who know a bit about Scotland's stones have heard of the Ring of Brodgar (see my previous post) and the Standing Stones of Stenness, there are many lesser know stones in Scotland, and I would like to share a few of those with you.

The Dagon Stone is located in Hasting's Square, Darvel, East Ayrshire, Scotland. Its size and shape suggest a prehistoric standing stone. It has twelve small connected depressions spread over three of its sides. These have been said to link the stone to astronomical observations and to the noon-day sun height at mid-summer. This would link the stone to life-giving powers, fertility and prosperity.
For some unknown reason, in 1821 someone attached a round sandstone ball to the top with an iron bar. It is 1.6m tall and the spot it originally stood is not known. It once stood in what is now the main street, at the end of Ranoldcoup Road  and was moved to the town square when the road was widened.
Before the 19th century, newlywed couples and their wedding parties marched around it for good luck, accompanied by a fiddler. Wedding processions used to walk three times sunwise round the Dagon stone on the way to the bride's house.
The annual parade or "Prawd", originally held on old New Year's Day, headed by the village band used to walk sunwise round the Dagon stone as a mark of superstitious respect. 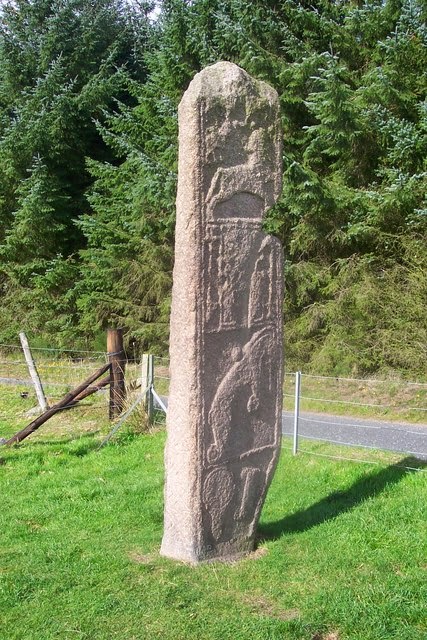 This is a Pictish standing stone near Inverurie in Aberdeenshire in Scotland. The stone is red granite, standing 3.01m high, one of the tallest of all Pictish monuments, though several centimetres have been lost at the top due to weathering. It is a Class II Pictish monument combining Christian, and pre-Christian Pictish, motifs. It dates from the late 8th or early 9th  century AD.
The name comes from a local legend that states the daughter of the Laird of Balquhain made a bet with a stranger that she could bake a bannock faster than he could build a road to the top of Bennachie. The prize would be the maiden's hand. However, the stranger was the Devil and finished the road and claimed her. The maiden ran from the Devil and prayed to be saved. According to the legend, God turned her to stone, but the notch at the top of the stone is where the Devil grasped her shoulder as she ran.
Based on the mixture of Pictish and Christian symbols on the stone it is thought that the stone marks a preaching site during missionary trips to the Picts.
The west side has a ringed cross below a human figure between two large monster fish. Below the cross there is a square panel with a disc with a Celtic spiral motif at the centre, surrounded by a key-patterned ring, with knotwork patterns infilling the corners. On the reverse, there are four panels enclosing: a large centaur below three very weathered figures possibly two smaller wrestling centaurs and a dog; a 'notched rectangle and Z-rod' symbol; a Pictish beast symbol, and a mirror and comb. There is a knotwork pattern on the narrow north edge and a keywork pattern on the south edge. A portion of the north edge is missing and the patterns are heavily eroded, particularly on the western face.
The human figure and the monster fish may represent the Biblical story of Jonah and the whale, with the whale doubled to make the design symmetrical.
The site is listed and under the care of Historic Scotland and is always open. You can also find more information about the Maiden Stone at their website. 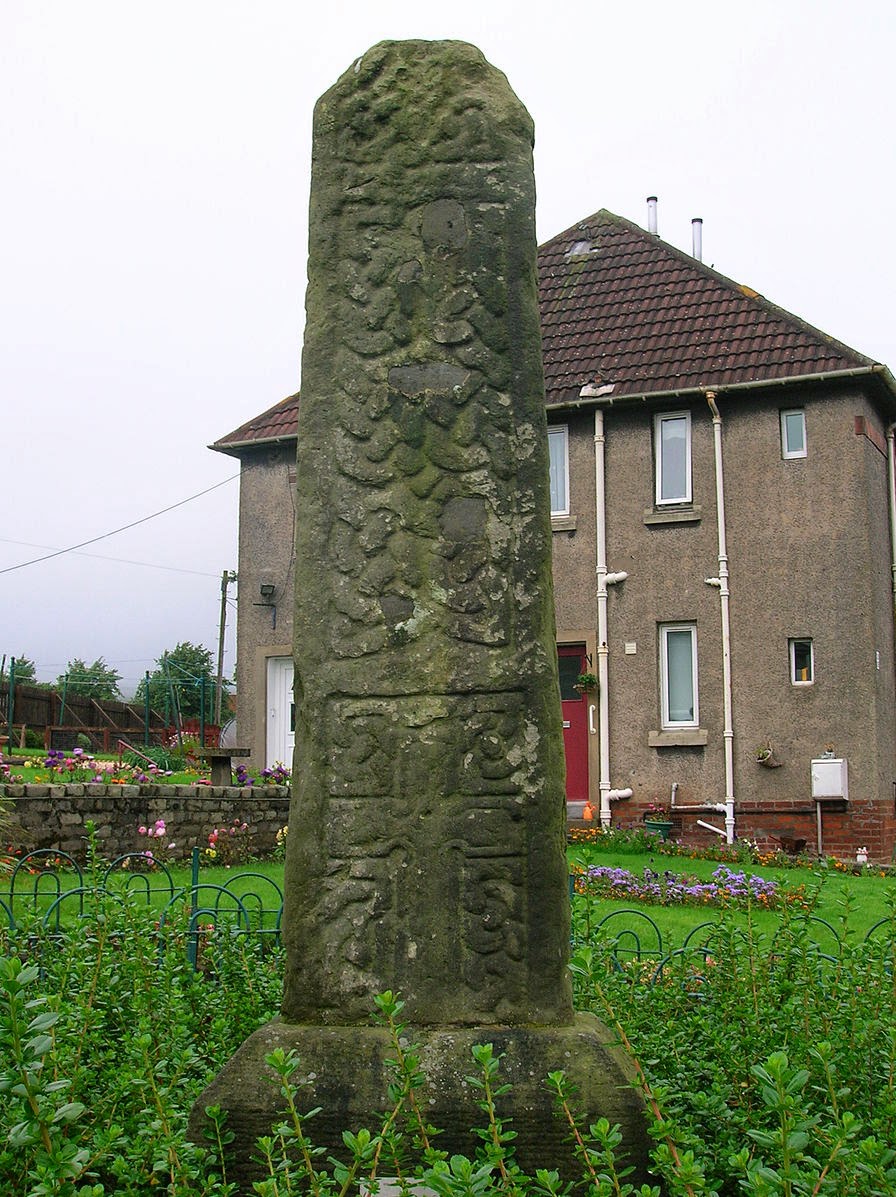 This stone is a 10th - 11th century cross-shaft made from a very hard and compact sandstone, and it now stands and it now stands at NS 4997 5854, by the roadside, set in a modern rectangular base and protected by railings.
The cross measures 2.2m high, 0.5m wide, and 0.2m thick and is in good condition except that one face is badly worn. One side had an iron ring indented into it, almost flush with the surface, this being done during its time when it was being used as a gate post after it was no longer used as a bridge. In the 1857 Name Book it was believed that its original site had been at NS 4968 5813 in a field called Cross-stane-park. In 1795 it was acting as a footbridge over a stream in the Colinbar Glen area at the bottom of the Cross-stane-park It stayed there long enough to be worn smooth on one face; it was seen by the surveyor in 1857.
In approximately 1870 it was erected in the grounds of Arthurlee House. Sometime prior to 1942 it was moved yet again by Barrhead Council to its present position.
The stone is said to be associated with Arthur, King of the Britons. Locally it was said to mark Arthur's grave.
I hope you enjoyed reading about these unusual stone!

By Gwyn Brodie at March 21, 2014
Email ThisBlogThis!Share to TwitterShare to FacebookShare to Pinterest

Awesome post!! Very interesting about the stones! I love seeing these.