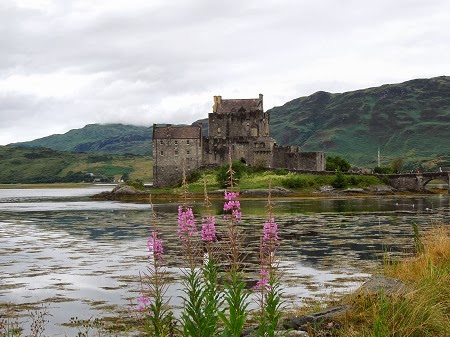 Eilean Donan Castle is said to be the most photographed castle in Scotland, and it's easy to see why. (I certainly have taken more photos of this castle than any other.) The castle stands in one of the most beautiful locations imaginable, on a tiny island where three lochs converge at Dornie. This island has served as a fortified site for over a thousand years, but the current castle is not yet a hundred years old. It was rebuilt between 1912 and 1932, with great love and determination by Lieutenant Colonel John MacRae-Gilstrap. 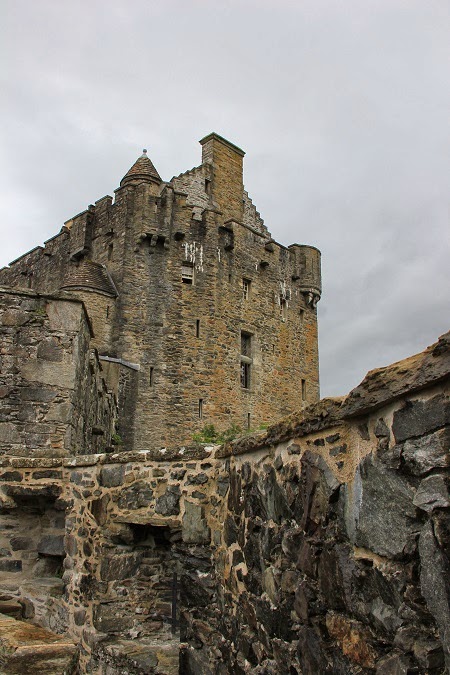 The name Eilean Donan means Island of Donan and was probably named after the 6th century saint, Bishop Donan. It is said he traveled from Ireland to the Dornie area of Scotland to spread Christianity. Several churches in the area are dedicated to Donan so it is likely he and his followers had a cell or community here on the island.

Another legend implies that the name comes from Cu-Donn, an otter, called the "brown dog" in Gaelic. It says when the King of the Otters died, his 'glittering robe of silver' was buried on the island beneath where the castle sits. 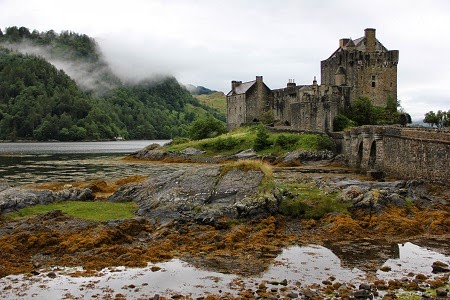 Eilean Donan is surrounded by three lochs--Loch Duich, Loch Alsh and Loch Long. It is easy to see whether the tide is in or out, depending on the level of the water under the bridge. The castle is most beautiful and picturesque when the tide is in and the castle reflects in the water. Even though it is surrounded by saltwater, there is a freshwater spring on the island. There is evidence that the island has been inhabited at least since the Iron Age. A castle was probably first built here in the early 1200s to defend the surrounding areas from Viking invasions. The fearsome Norse had raided, settled in and controlled a large portion of the north of Scotland and the Isles between the years 800 and 1266.

A fortified castle occupied the small island by the middle of the 13th century and was likely defended by a large garrison of men from land and sea invasions. 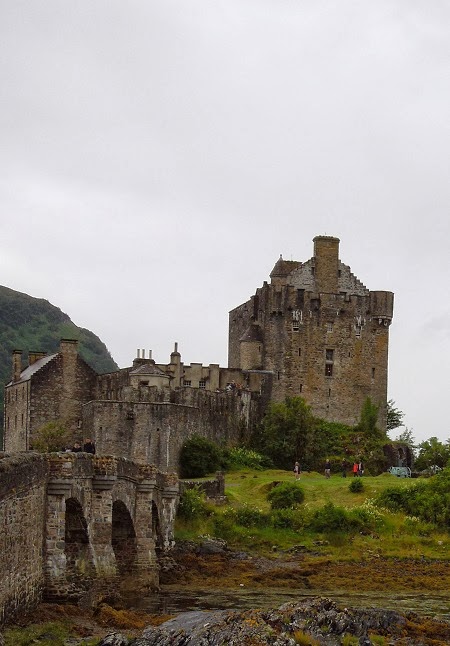 The castle here has taken on many forms over the centuries. The remains of the 13th - 14th century castle shows foundations of towers and a certain wall which are still visible. The wall enclosed about 3000 square meters, larger than any other subsequent time, and enclosed almost the whole island. The keep stood on the island's highest point. But a massive northern tower with 3 – 4 meter thick walls dominated the site. The wall also contained smaller towers and sea gates. 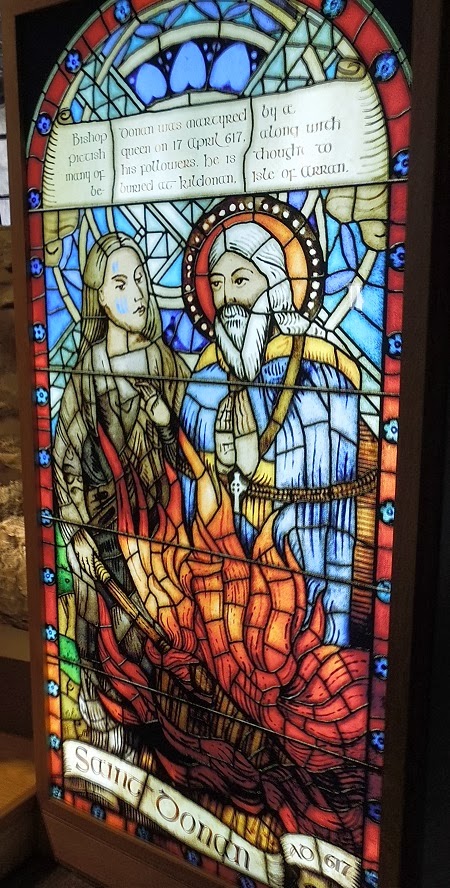 Beautiful stained glass tells the history of Saint Donan, one of the early inhabitants of the island of Eilean Donan long before the castle was built. 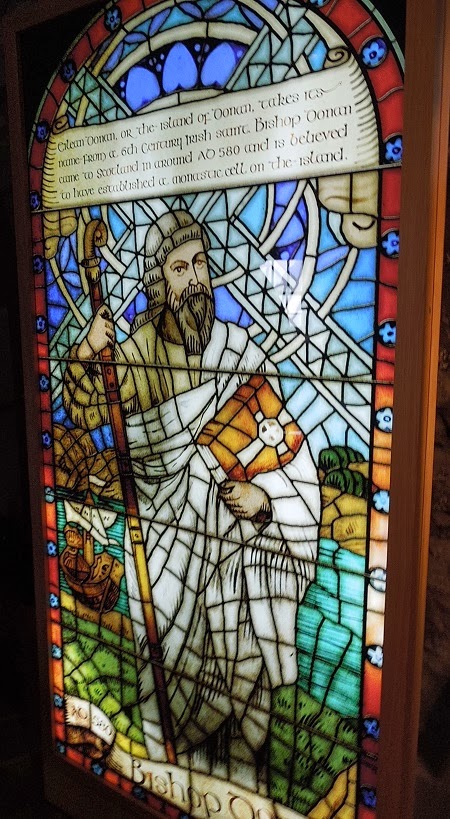 The castle is in a perfect strategic location at the meeting of the three lochs, to defend the Kintail area because they could monitor the comings and goings of boats, galleys or birlinns. These vessels were the main mode of transportation for the Highlands and Islands of Scotland during medieval times. After the Vikings ceased to be a threat, there was the conflict of feuding clans. Chiefs showed their strength by the number of men and birlinns they had. The boats were defended by archers and slingers. Birlinns had square sails to take advantage of the abundant wind in Scotland and most had between 12 and 40 oars. These boats were shorter than the similar Viking longships and more maneuverable.


The museum area at Eilean Donan has been improved recently and I love the new displays. The birlinn (galley or boat) display is great. 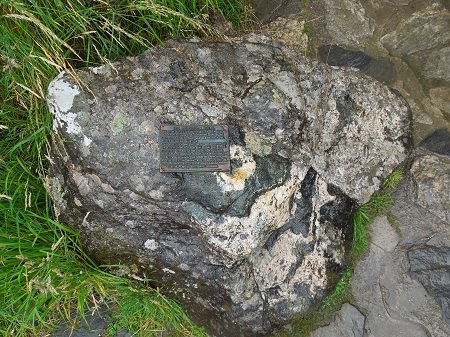 Do you think you could lift this stone? It's huge, by the way. 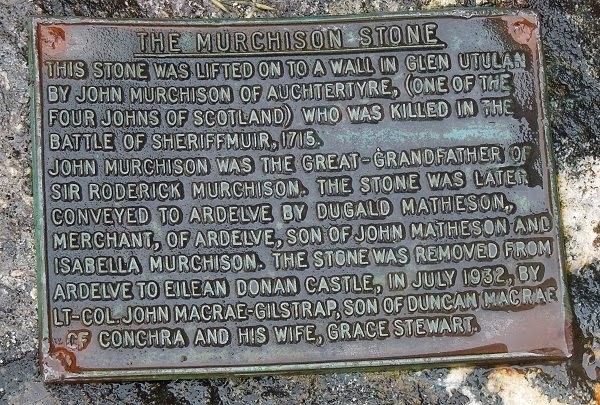 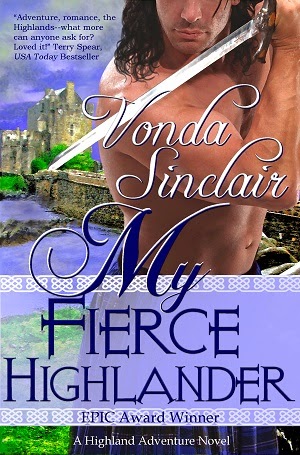 Also, you will notice Eilean Donan Castle on the cover of the first book in my series. :)

I'll continue my post about Eilean Donan Castle next week.
Thank you!
Vonda

Thanks for sharing, what wonderful information and pictures!

Yes, what wonderful information and pictures!

Terrific post. Loved the pictures and the information. I brought back a photo of the castle when I visited Scotland; I glance at it and sigh--often. Unfortunately I didn't get to visit it when I was there. Tweeted.

Beautiful pictures. I esp. love the one of Loch Alsh. I keep wanting to know if you're a trained photographer.

Thanks Denise! Glad you liked it!

Barbara, thanks!Hope you get to visit the castle on your next trip!

Carly, thank you! I took one photography class in college and have a minor in studio art. :) Not sure if that counts.

Thank you, Lani! So glad you liked it!

You already know my love for this castle (above and beyond the Million Dollar Bars). It is the first castle we were in, the first kilted Scot I saw in the Highlands, and the one castle hubby took me back to see one more time the next day. The first sight was when the tide was out. It is awesome to see it that way before seeing it with the high water. Thanks for the history to go along with the beautiful Vonda photos. You do realize how homesick you've made me!!! Thank you!!

Love these pictures. That close up of the castle is wonderful.

It is a very special castle, Paisley! (And their Million Dollar Bars are the best in the world!) :) I love the way the castle and whole area look when the tide is in. I love the reflections in the water. Thank you!

Thank you so much for posting this as Clan MacRae is my family heritage. A friend of mine is also a castle guide and a very talented photographer as well. My current cover picture is her photography talent of Skye, Scotland. This means a great deal to me so thank you so much. Hugs

Thank you, Barb! I'm so glad you like the post! How cool that you are a part of Clan MacRae! Scotland is so much fun to photograph.

What a gorgeous place! That castle is amazing.

Eilean Donan Castle is one of my favorite places in Scotland. You photos are beautiful. Thanks for sharing.

Thank you for checking it out Vanessa and BB!! So glad you enjoyed it! :)

As always, your tour was informative and beautiful. I loved all the picture angles of the castle.

Thanks Vonda, that was fascinating. And thank you for sharing all those wonderful pictures.

Thank you so much, Melba!! I'm so happy you enjoyed it!!

Thank you so much for sharing. It gives us all a little taste of this wonderful place. It simply makes one want to just get up and go there.

I'm so glad to give you guys a glimpse of what is waiting for you across the pond. :) Hope you'll get to visit Scotland soon!