Cougars are Coming to Town--And I mean... Cougars! 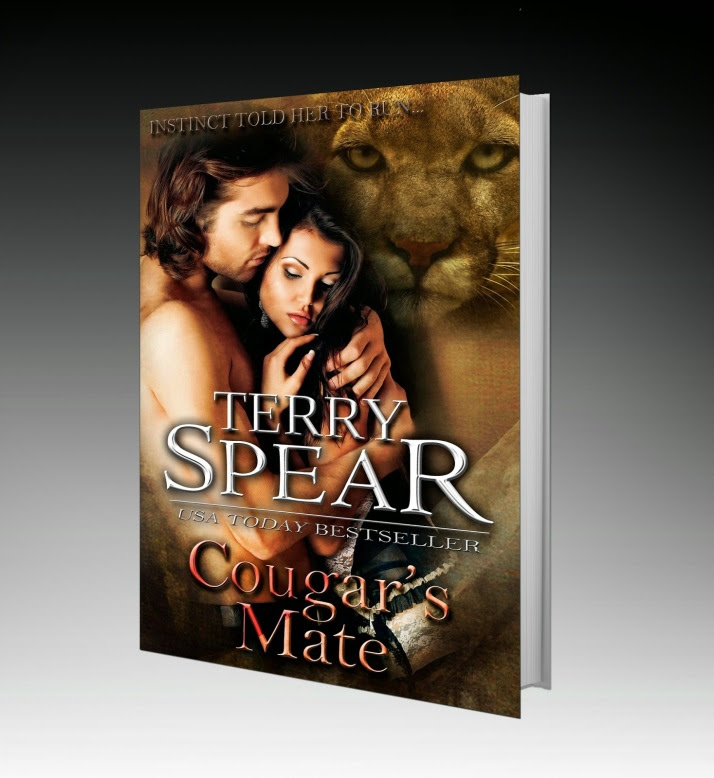 Shannon Rafferty learns that hanging out with the bad boys could be a dangerous business, but hooking up with a cop is even worse. Now she’s on the run, trying to avoid being murdered by his cougar shifter brothers and uncle. If that isn’t bad enough, a deputy sheriff hunts her down while she’s running as a cougar and trying to survive in the Colorado wilderness. He vows to protect her no matter what she’s done. With three dead boyfriends to her name, she’s sure she will be the death of Chase Buchanan before either of them can prevent it. No matter how much she knows she has to run again, he soon holds her heart hostage. But will that be enough to keep them both alive?
Chase Buchanan—as wilderness cabin resort owner, former US Army Special Forces, and part time deputy of the small town of Yuma, Colorado that boasts a love of cougars—is tasked to track down a cougar reported to be hunting human prey. Chase soon learns she’s a shifter, not a full-time cougar, and she’s on the run. When he takes her in, he vows to protect her. After losing his wife and baby to the human kind of predator years earlier, he’s not letting Shannon’s hunters kill her, too. But how is he going to hold onto the wild-cat woman, who is unpredictable at every turn, without losing his heart to her, and then losing her as well?
***
One of the joys of writing books is writing The End. I have a TON of books I’ve started and are still works in progress, some that I’ve finished that still need a lot of revisions, but there is nothing like the thrill of writing a book from beginning to end!

I’m currently rereading Cougar’s Mate and catching mistakes. Here are a couple that I thought you might enjoy: He’s gone to bed and he’s on his laptop when he gets a call from the sheriff and learns who Shannon is. So he has to talk with her about what they’re going to do about the trouble she’s in.
The mistake in the scene? He went to bed naked. He’s a shifter, what can I say? And he’s alone.

But…. he didn’t throw anything on before he went to talk to her.

I love writing. :)  Sometimes the mistakes we catch are just as much fun!

Another: He’s wounded, has to locate his phone. His police phone is outside. She had used his personal phone in his bedroom as the bad guys are trying to reach her. She drops the phone and shifts and heads out through his window. He realizes she has to have left the phone in the bedroom and he desperately needs it to call for help. So he goes into the bedroom, and sure enough, it’s there. Wait.

The door was locked to keep the bad guys out.

Hopefully after it’s reviewed thoroughly, it will be ready in a couple of weeks. So yesterday after writing the end, I took a break to proof the rest of the 21 chapters of the audio book for The Highlander. And today, I’m rereading the last half of Cougar’s Mate. And I already started rereading the first 12,000 words of The Viking’s Highland Lass so I can get to writing on it again. Then I have to write A SEAL Wolf for Sale.


But I just got the edits for A Highland Wolf Christmas!

Wait! Shouldn’t I have had a celebration in there for finishing another book this year?????
I will when I see my daughter and SIL and we’re going to do lots of fun things. So for now, I’m trying to get as much done before that happens!

This book was a lot of fun. But then, I always have fun writing them!

As with all my shifter books, I based a lot of the animal on the real animal–so I always enjoy researching about the animal and its characteristics and behavior while I’m writing. Jaguars love the water and love to swim. I never really thought of cougars caring for the water. But I was looking for references to this and found one where a cougar was swimming after a fishing boat! They caught it on Youtube. And then another was a photographer’s beautiful pictures of a cougar jumping up and into the water to rescue her cub that had fallen into the stream. He caught a picture of the leap, and then of her with the dripping wet cub in her mouth. Really cute.

I’m off to read and then write.

Ready for some cougar shifters?

Have a lovely Monday!!!