I also went to National’s this year for the first time. As a newer writer, I’m not one of those who were born with a pen in my hand, a book maybe, but definitely not a pen. I didn’t start writing until about three years ago. Anyway, I digress. As a new writer, I have had very bad bouts of writer’s block. Scary stuff really, especially worrying if you have finally written all the voices out of your head. I hate the feeling of nothingness in my brain that, Heaven forbid, my muse has left me for greener pastures.

So I went to Nationals with a purpose: figure out how to kick writer block’s ass. There had to be a reason behind the dreaded occurrences. With stunned amazement, I’ve watched writers who seem to have no issue turning out pages upon pages everyday when I struggle to write a single sentence. What was the matter with me? What caused my dilemma? How do I get rid of it?

I was shocked by the answer. The ongoing consensus from writer after writer was writer’s block does not exist.
Say what?!?! Well, I sure as heck have it.

However, I forced myself to listen. I mean, they had to know what they were talking about, right? These were multi-published authors who’d been around the block a time or two. As I listened to their reasoning on why writer’s block doesn’t exist, the more my eyes opened.
Really? Did she just say outside interference creates this? Well, dang, I have a ton of that.

I could have easily placed a check beside everything they listed.

Wow, they really did KNOW what they were talking about. So I perked up, waiting for that splendid moment when I would finally know the secret to beating this horrible thing.
The secret wasn’t much of a secret. Write. It was all you could do.
So I came home with the determination to kick writer’s block to the curb and really get into my new project. I can say I have made headway, more so than I have in the last few weeks, but I have found a new problem. One I wished I had been more aware of when I’d been in these workshops, so I could have asked my questions. I am hoping that maybe some of you could shed some light on this recent development that I have become aware of. I have heard writers say they couldn’t wait to finish a book and start a new project. They wanted something fresh, new characters, new plot, new everything to work with.
My issue is the exact opposite. I find it difficult to let my previous work go so I am open to start a new piece. The problem doesn’t really lie with the shorts I love to write. It’s my full length pieces, the ones that take me months to write, where I am with the characters for so long they become a part of me. I’m finding it difficult letting them go so I can move on to a new, fresh story.

Does anyone else have this issue and if you do how do you get past it? Throw me some of your ways of working through those moments where you go Oh God, what have I done and how do I work myself out of it. (If you can’t tell, I’m a pantser, I don’t know if I would have this issue if I plotted)

On a side note, the comic with the cleaning describes me completely. LOL.

One a different note, The Feline Fugitive has been reviewed by both Book Wenches and You Gotta Read Review. 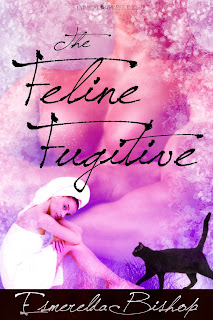 Cat lovers, here’s one for you. Esmerelda Bishop’s The Feline Fugitive is a quick and entertaining read about a woman and the cat who loves her. It is humorous, sexy, and suspenseful and features a couple of characters who will alternately amuse and exasperate you. Bobby, Book Wenches


Are you new to the shapeshifter genre? This would be a perfect book for you. It explains some of the aspects of shapeshifting and what a life-mate is all about. It doesn't overwhelm you with too much information just the right amount. Plus, you get a hot and steamy relationship to explore with Luca and Claudette. For a short story, it packs a lot in just a few chapters. It was a pleasant and refreshing read. If you are strapped for time, this would be perfect for you. Roberta, You Gotta Read

Thanks!
Esmehttp://www.esmereldabishop.com/
http://www.lyricalpress.com/
By Abby Niles at July 25, 2009
Email ThisBlogThis!Share to TwitterShare to FacebookShare to Pinterest
Abby Niles
I'm a stay at home mom to 3-year old twins.

You write well for someone so new to it! I heard a quote from Nationals where a prominent author said there was no writer's block, only lazy writers. We'd rather be doing something else.

It gets better the longer you work at it, if you let yourself improve. I had to learn to plot, to keep from worrying I was wandering. Still, I may freeze at the beginning of a scene. If so, I ask questions.

What do I want from this scene? What does it need to add to the plot?

Transition scenes are scary. You can always go to the next place you know and write your transition later.

On twitter, either Christina Dodd or Theresa Medieros said something like "Write anything. You can always edit your words later. You can't edit a blank page."

It doesn't have to be perfect the first time around. That's what editing and polishing are for.

I believe Janet Evanovich said some days she writes only 4 sentences. So I guess if you just get some words on the paper - it can flow from there. And she probably has a point LOL.

Like everyone above said, you can fix it in rewrites/edits.

Usually if I get blocked it's because I took a wrong turn somewhere in the story. If I let the problem cook for a day or two, the answer seems to come out of nowhere. Then I can move forward again.

Esme, I'm one of those who barrel to the end. I love finishing stories, but then it usually means I rushed things and I have to go back and layer in more stuff. So it's really quite a while before I have to say good-bye to the characters. I understand how hard it can be to let them go, but think about all new characters just waiting to have their stories told.

It was great meeting you in DC, Esme!! Sometimes I also have a hard time letting go my characters from novels. One way I deal with it is to develop secondary characters from one book into main characters for another book. Then the former hero and heroine can come into the second book as secondaries. As for writer's block. I don't know if it exists or not. I know sometimes I have a harder time writing than other times. It comes from how we deal with things emotionally, I believe. Or maybe we're putting too much pressure on. If I feel that way sometimes I'll just read a bunch of books by my favorite authors. That usually makes me feel refreshed and inspired. Also just writing anyway and finding the fun in it even when I may not feel like it. Brainstorming can also help. Good luck!!

I find the main answer, as you learned, is simply to force yourself to put something down on the paper. It may not be great, but you may find it at least leads you forward in the story. Then you can edit it. Sometimes, I put on music and get on the treadmill and think about the story. The music inspires me and now I have to keep a pen and paper by the treadmill so I can stop and write down what just came to me.

I just wrote an epilogue to my RS story, though the story has been published for a year. The characters just started up with me. I plan to put it on my website, if the site designer ever gets me my site, that is.

Ari-I'm going to have to work on just writing. That is one of my definate downfalls as a writers. I'll have to agree with the Twitter post. I can't edit nothing, lol.

J Hali-I think I allow outside interference to bother to much. Right now my kids are home for the summer. I have found even more difficult to write now because of that. constant interruptions. Is there such a thing as a school year writer? LOL.

Natasha-I'm just going to have to learn to do that. Write and fix it later. Now its actually doing that:)

Nicole-It was great meeting you too. I'm glad to see someone else who has a hard time letting characters go. I love your idea of a series. I love to read series. I tend to write smallers casts, or secondaries that I can't really write a story about afterwards. Maybe I need to change that. I love the thought of revisiting my old hero and herione.

Carly-Thanks on the review. I bet your readers are going to love the Epilogue and what a wonderful idea to do for them. Its always so nice catching up with previous characters I have read!!

Hey Esme, here are a few things you can try to combat writer's block.

Change your writing space. If you usually write at a desk in an office, take a pen and paper and go sit in a park, or go with your laptop to a coffee shop. Different writing environments can give you different results.

Create some random, oddball character and try to write in their voice about what you really WANT to write. If you can get it down in someone else's voice, it will be easier to get it down in the appropriate voice for the story.

Talk to someone about your writer's block, whether it is a spouse, your baby, a pet, or a stuffed animal. Tell them what is going on and get them to understand it. Then write.

Start with a different part of the story. If beginnings give you problems, start with a fun scene that you are DYING to get to. Or maybe you are better at writing endings than the middle...start there.

If you're having a difficult time letting go of certain characters, write a spin off novel. Take a secondary character or two from that story and give them the lead in your new story. It can be a fun way to give those characters some more time, without having to completely live in their heads again.

Esme, I usually get writer's block when I don't know where the story is going anymore. I usually have to work it out in my head before I can sit down and write again, so I tend to write in spurts - turning out 25 pages one week and then 6 the next. I need to have a turning point or climactic scene to write to when I sit down; then it all flows.