Spiders, Iguanas, and Lorikeets...Oh My!

Guess who’s got a spider in her spare bathroom?

Anyone who knows me at all knows that I’m an animal lover, a possessor of the mutant gene that makes a person go ga-ga over not just cute puppies and kittens, or even horses, birds, and bunnies, but any creature that flies, crawls, wiggles or squiggles about on earth. That even includes spiders, snakes, alligators, snails, and, as my hubby so cleverly puts it, especially the birds and the bees (ba da dum). I used to think I was some kind of freak and tried to break my habit of being so soft-headed and soft-hearted, but then, after several bouts of recidivism, in an effort to get on with my life, I decided to do what many of my contemporaries around here have done when they can’t find any really good excuse for any number of screw-ups they’ve committed or flaws they’ve yet to overcome—I blamed my mother.

She IS responsible, actually, on both the nature AND nurture level. Biologically, she contributed her tainted DNA to my fertilization and production. On the nurture side, she did nothing to dissuade my critterological pursuits. As a child, it was not unusual for her to ask my grandmother if she could bring a friend to dinner. That friend usually turned out to be a bug she’d let loose on the table or a snake she’d keep tucked safely inside her blouse sleeve so as to not raise the alarm and my grandparents ire. You can see how I never stood a chance, can’t you?

So, guess who’s got a spider in her spare bathroom?

I do. His name is Leonidas, and he’s a tiny little guy, much tinier than his predecessor, Pericles. He made a little web in an out of the way spot near the faucet, and every morning I go in and say, “Hiya, Leonidas, wassup?” To no one’s surprise, he doesn’t answer me. I’m not sure what he lives on, as I never see anything in his web, but he seems to be doing well. And as long as he’s not trying to snag a cat or attack me with laser beam eyes, he can stay.

This is how I am, so imagine my surprise when my husband left it up to me to pick out which excursion we would take on our cruise this last June. He should know better! But I think he hates making decisions more than he fears whatever hokey scheme I will come up with to get my hands on some critters, so he cleverly found a way to delegate the decision to me.

“Honey, you make the decision,” he said.

So I did. That’s how we ended up in the bottom of a submarine-type thingie staring out the windows and taking in scads of fishies before wandering a marine park on the island of St. Thomas. Our guide introduced us to our captain and his first mate, Davy, a very adorable English Bulldog. Oddly enough, the captain described how he was surprised Davy could swim like a champ, since his breed wasn’t known for their aquatic skills. Why someone who captains a boat would choose a dog whose breed isn’t known for its swimming capabilities for a pet was beyond me, but Davy seemed to bask in the attention of his guests, going so far as to try to chew my hand off with his puppy teeth before allowing me below. Since he didn’t try to eat anyone else, I felt sort of special, so we soldiered on into the bowels of the boat. 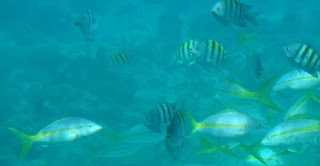 I enjoyed seeing the bottom of the ocean and some of its inhabitants, including yellow tail tuna and a fish called the Sergeant Major (because of the stripes). We also saw barracuda, which may be why in one picture we took (not posted here) it appears the captain, who’d gone out with fish food to attract some marine life for our viewing pleasure, is trying desperately to get back in the boat. I imagine Davy was up on deck, throwing chum overboard and chuckling. I hear English Bulldogs are quite clever when the mood, or opportunity, strikes. 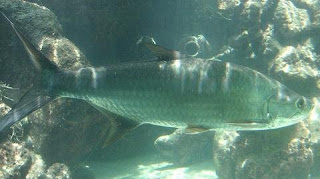 Anyway, we ambled off the boat with some memorable picture 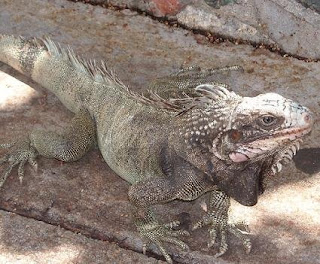 s, some of which you see here, and wandered over to the marine park. I have mixed feelings about these places, as I do zoos, but since I didn’t realize it was part of the excursion at first, I was committed to seeing it through. I was happy to note that the iguanas roaming freely throughout appeared to be very, very content and happy…and confident. These fellows would stroll right up to us, stop, and pose. No begging for food, just striking poses. And they wouldn’t leave until I took several photos of all of them, turning this way and that, lifting their chins in the air and doing jazz tails. Then they just all sauntered away as if nothing happened, as if being fabulous was an everyday occurrence for them. I have to admit, they were quite striking, and they did inspire some ideas for my next shape-shifter story. 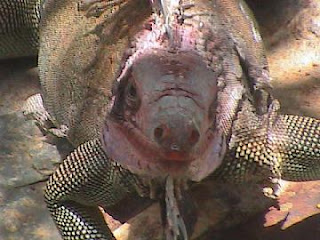 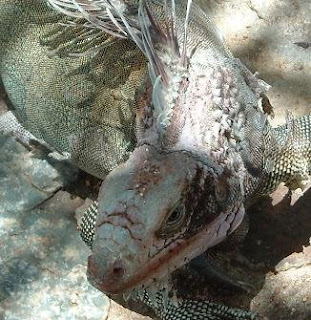 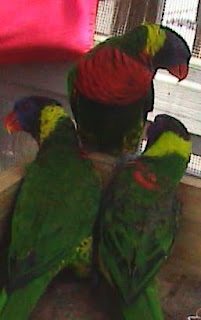 We also enjoyed the lorikeets, which is a bird in the parrot family. They were colorful and friendly, although we did witness what the guide described as a marital dispute between two of the birds involving a third bird. They all got in this box with little plastic balls and starting batting them around while jumping on each other and "grooming." Personally, I think we were unwitting voyeurs to an ornithological ménage scene, but who am I to question park personnel? Besides, I got even more fodder for new stories.

There was so much more to see—stealthy stingrays, sneaky starfish, drooling nurse sharks—but I have to admit that there’s no critters like my familiars, who watch over me as I write and demand attention so that I don’t get too absorbed in my other worlds. They keep me balanced and lavish me with the opportunity to worship them, for which I am eternally grateful, so I was happy to return home to my kitties and, of course, Leonidas.

Have you hugged a spider today? lol
By Cameo Brown at July 10, 2009
Email ThisBlogThis!Share to TwitterShare to FacebookShare to Pinterest
Labels: Cameo Brown, menage, shape shifters

Great pics, Cameo. However, I dislike spiders intensely! They seem to follow me around and bite me. I did have a pincher bug (earwig?) as a pet when I was a little girl and I named him Easy - don't ask me why.

Great post, Cameo!! I too have mixed feelings about zoos. I love seeing animals but don't like to think of them confined. Wild and free is better. I don't like spiders, certain bees and mosquitoes. If they leave me alone I leave them alone. LOL Oh and I hate snails and slugs because they devour my beloved plants. Ack! Other than those and a few more, like copperhead snakes, I love animals. My favorites along with dogs and cats are the chipmunks and rabbits that live in our yard and garden. Also the birds. We even have cute possums that come through sometimes and we give them food. Bears also live in our area and I'm terrified of them.

We saw iguanas running around on the Caribbean Islands on rooftops, just all over. They catch them and eat them. The tour guide said they were like fishy chicken. So when we went by a Kentucky Fried Chicken, you bet we wondered what they were REALLY serving! :)

We have black widow spiders really bad in California and Oklahoma. And a number of people I've known have been bitten by the Recluse, bad news. So nope, don't like spiders.

I love earwigs, Carol. They are so energetic but seem so lost most of the time. Really sort of sweet.

Nicole, I like seeing animals wild and free as well. We get so much enjoyment watching them in their natural environment. Even though we're in the city, we have our fair share of bunnies, raccoons, opossums, squirrels, and an occasional snake slipping through. We have tons of insects--just saw a wolf spider scurry across the porch this morning. There's nothing like natural nature!

We have black widows and brown recluses, too, Terry, so we are VERY careful when we spot a spider. Usually, though, they're fall into the less threatening categories: wolf spiders, daddy long legs (which are venomous but have tiny little fangs), house spiders, jumping spiders, etc. If the spider is suspicious, we remove him QUICKLY. lol

Nope don't love spiders, no way. But I DO love the term critterological :) I would love a trip under the water like that. How cool.

Love your post on the cruise, Cameo! Those pictures are so vivid and magical. Thank you for sharing them with us. Those lorikeets are adorable.

I'm also an animal lover but wouldn't welcome Leonidas in my bathroom LOL Spiders and snakes give me the shivers :)

Natasha, I randomly make up words. It's kind of fun, though it gets me in trouble sometimes. lol

Shawna-Thank my hubby for the pix. He's the camera guy. I tried using our digicam to do stills this trip and most didn't turn out. Boo! I took most of the lorikeet shots, which is why they're dark, but I still wanted to post them because they are really cool birds. :)