mammals? Or is it their friendly and playful personalities that make them so appealing? Dolphins are featured in human records all the way back to Greek mythology.

One of the most amazing and fun activities my family ever experienced was swimming with the dolphins in the Gulf of Mexico. They are so playful and friendly and swam among us, letting us pet them. They are very social and attuned to each other, which is why you so often see pictures of them jumping and diving together. When we were swimming with them, they were always in pairs. They did “kiss” us and wave bye-bye. (More on that later.)

The highlight of our swim was a trick in which two dolphins swim up behind you and together they lift you in the air and plow forward in the ocean, giving you an amazing ride. 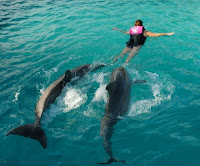 They are strong, but gentle. They seemed to be having as much fun as we were (though who really knows?) Though I must admit I’m not the type who ever fancied being pushed through the air by dolphins, I was really glad I did it. (nope, not me in the pic)

This was one of the best activities my family has ever done, worth every penny. We even bought the video afterwards, which is something I’ve never done before or since.

This is an expensive outing (plan on $150-200 per person). We were told that part of the reason for the high cost is that some of the money is used for research to help the dolphins. I hope that’s true. The trainers we met said they (the trainers) were all marine scientists and the animals were treated well. It was definitely not an amusement park type setup but…

There is controversy over using dolphins to entertain humans, and I can see the problem. These dolphins had been trained to perform and, although they lived in the ocean and not in pens, they had to have some constraints on their movements. They were not fully wild.

On the other hand, there are marine scientists who argue that the money raised through allowing human interaction with dolphins provides funds for research and education that will ultimately help the dolphins. Also, bringing humans into closer contact with dolphins is seen as a way to develop support to save not only the dolphins, but other sea creatures as well.

Dolphins are under threat not only from man (fishing, coastal development, etc.) but also from the general threats to the sea and to all marine life (pollution, pesticides, loss of habitat, etc.). Ultimately, their fate will most likely depend on humans.

Let me leave you with a few interesting facts about dolphins.

They are social animals who live in groups. They only breathe voluntarily, not automatically as humans do. They don’t sleep as we know it, but do nap for a few minutes at a time. It is believed they communicate with each other through sounds they make. And finally, to keep us somewhat on topic, dolphins are sexually promiscuous and the males compete for females (in much the same way human males do through displays of power, fighting for dominance in the pecking order and showing off.)

They are awesome animals when seen up close. If you ever get a chance, please put in a good word for them. Keep them smiling!
By Carly Carson at July 08, 2009
Email ThisBlogThis!Share to TwitterShare to FacebookShare to Pinterest
Labels: Carly Carson, dolphins, swimming with dolphins

Thanks for posting this. We are taking my niece, 8,(who is blind) to do the Dolphin interaction at Sea World next week. I think it will be an amazing experience for her.
Shannon

Love these incredible creatures! My hubby and I saw two swimming around at two different beaches when we got married. It might not have the same pair, but we took it as a good sign anyway. :)

I do think your niece will love it. Somehow, the dolphins manage to give the appearance of being incredibly affectionate. Since they swim right up to you and brush against you (always gently) it's a tactile experience much more than a visual one. My dd was 8 when we did this and I felt completely safe letting her swim on her own and she even did the "ride" by herself.

I hope you have lots of fun! Thanks for stopping by.

I was surprised to learn they are promiscuous because they do seem like the epitome of coupledom. So definitely take it as a good sign! We certainly don't know otherwise.

Do it! Seriously, it is so much fun.

I did a dolphin swim in the Philippines with DH and it was a wonderful experience.

Great post, Carly! What an awesome experience. I hope I get a chance to swim with those promiscuous dolphins someday. :)

Everyone who has the experience seems to love it.

Carly, what a great experience. I know dolphin swims are offered in Hawaii, but we've never done one. But when we're at the beach down the road we often see dolphins swimming in the ocean just beyond the boogie boarders - they usually show up later in the afternoon and are beautiful to spot.

Carol, I've always dreamed of swimming with the dolphins. Your post has persuaded me to do so one of these days :)

What a wonderful post! Very uplifting to read this Sunday morning :)