My Close Encounter with David Beckham 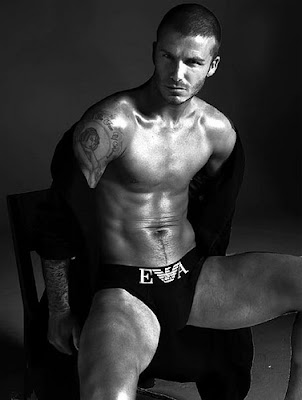 OK, I didn't get THIS close.
My boys play club soccer in southern California, and a few weekends ago they had the opportunity to be present during a promo stop for David Beckham and retired French soccer star Zinedine Zidane (who ain't half-bad himself). Adidas was kicking off a program to establish soccer fields with artificial turf throughout the inner city. I think they chose our soccer field to announce the program because it's relatively new and has artificial turf. Anyway, our club soccer players along with kids from AYSO (American Youth Soccer Organization) were invited to be "window dressing" at the event. Another So Cal team actually got to play in a scrimmage with Becks and Zizou (that team is sponsored by Adidas and our teams are sponsored by Nike - I think that's why those kids got to play the scrimmage and not ours). The kids also received shorts, jerseys, and cleats from Adidas, which was cool.
The kids sat at the foot of the stage where Becks and Zizou were introduced, and the parents got to sit on bleachers set up on the field and take pictures. There was also an area for the media. The crowd went nuts when they finally made their appearance. They answered a few questions from the media and placed their feet in cement for their footprints. After they wiped their feet off with towels, they tossed the towels out to the kids! 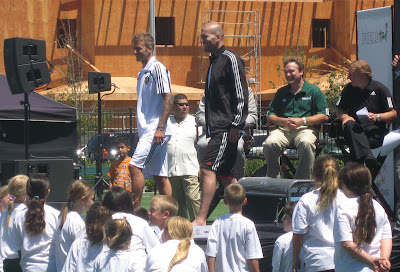 Following the footprint ceremony, they played a scrimmage against a team of boys and a team of girls. Zizou knocked one of the kids over and immediately extended his hand to help him up. I'm sure that kid's going to treasure that moment forever! 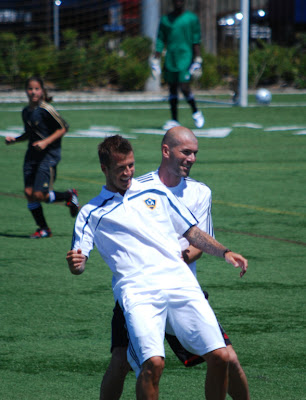 It was very fun to watch. After the scrimmage, the rest of the kids were invited back onto the field for a group picture. As my older son walked past Beckham, he asked him for his sweat towel, which Beckham tossed to him! (He hasn't washed it yet, nor will he ever wash it!) Then during the group picture, my older son, who was the tallest kid out there (long story) stood in the back row next to Beckham, who put his arm around him. We're still trying to get a copy of that picture from the media who was there taking the pictures.

We still got lots of great pictures, and it was an exciting day for the kids (and the moms). I managed to restrain myself, although one of the moms, who happens to be British, yelled out after the footprints, "David, you can come to our house later to wash your feet." LOL

Of course, all did not end completely happily for Becks as he was booed last weekend when he returned to the L.A. Galaxy when they played against his former team AC Milan. Becks has been trying to leave the Galaxy to play with Milan (who had him on loan for a few months), and the L.A. fans don't appreciate that. Of course, we know his wife loves L.A.

So that was my brush with David Beckham, who was the inspiration for my as-yet un-sold, unpublished romantic comedy, Kick It Up, about an English soccer star (this one single) who comes to L.A. to play soccer and winds up in all kinds of trouble. And no...I didn't bring my manuscript to the field.
By Carol Ericson at July 23, 2009
Email ThisBlogThis!Share to TwitterShare to FacebookShare to Pinterest

How fun and exciting that must have been, Carol! Thanks for sharing!

Great story, Carol. It must have been a lot of fun (even for your kids, lol).

I wonder how sports stars fare in epub. Everyone says no, no, but I have seen them in print best sellers.

Nicole, yeah it was cool. We all got some great pics.

Carly, I've heard the same about sports stars, although Susan Elizabeth Phillips has hers and there are a few other series out there about hockey and baseball players. I came really close to getting a good agent for this book, but in the end she thought my soccer player was too cocky (he is but it's all a mask for his insecurities). I haven't tried the e-route yet.

You ladies always have such fun, interesting and informative things on your blog and becuase of this, I have left you an award! Please go to- www.chicksofcharacterization.blogspot.com

and go to my "ONE LOVELY BLOG AWARD" post!

Keep up the good work Ladies!

Carol,I don't watch soccer, so I don't really know much about the sport, but you've sure made me curious. *grin* And what a wonderful experience for your boys. :-)

Mmmmmm, that man is so hot. Can't wait to hear more about Kick It Up!

Donna, I always knew a little about soccer because my brother followed it, and I went the World Cup when it was in L.A. Then I really started learning more about it and following the L.A. Galaxy and the World Cup when my boys started playing soccer and really getting into it. They're both awesome soccer players.

Liane, isn't he FINE? The French player was sexy too and doesn't speak a word of English - oui, oui!

Ooh, I've been stroking my computer screen for the longest time...

Loved this post, Carol! What stood out to me is that it appeared both men were gracious, and it looked like they were really enjoying themselves. Celebrity can be so hard to handle, and so many celebrities in sports, movies, and literature (ack!) can be so unpleasant. Speaking of movies and books and celebrity, here's a link to an article about Daniel Radcliffe (of Harry Potter fame) and how he handled an interview with an 11-year-old reporter with great aplomb.

Natasha, now you'll need a tissue to clean your monitor...

Cameo - yes, both players were very good natured and great with the kids. They also seemed to be having a lot of fun on the field. We didn't stay after the media got their crack at them, but I know they signed autographs and stuck around for pictures.

Oh, Carol, I LOVE this story! How great for you and your kids. I wish I'd been with you!

Lexi, oh yeah, I forgot - you're a big soccer fan! We could've gotten their autographs if we had stuck around, but the boys wanted to leave. Honestly, they're not that impressed with "celebrity" maybe because we live in L.A. and see celebs frequently. We saw Kobe Bryant a few years ago outside of a Quizno's on his cell phone. I told the boys to get his autograph, but they didn't want to do it. An adult went up to him and he signed something for him while he was still on the phone!

Wonderful story!! Close encounters of the Soccer Kind. *grin* Very cool. How fun for both kids and moms!