Are You Feeling Wicked? 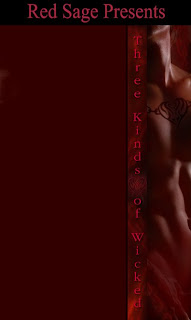 So several Red Sage authors got to yakking online after the RWA Conference in San Francisco last year about writing a series of connected ménage stories. I believe Liane Gentry Skye’s husband actually came up with the idea of a time-traveling hunk getting cozy with different couples, but then the ideas were bouncing around fast and furious, so I may be mistaken. When the dust settled, we had decided on a series, Three Kinds of Wicked, featuring a demi-god, Trey, who has to make things right between ailing couples to earn his redemption and his own true love. Pretty cool, huh?

We came up with descriptions of Trey (and his tattoo), posted a few inspirational photos of him, and then each of us decided on our individual stories featuring Trey. We bounced some ideas off one another, got pretty silly, posted some synopses and excerpts, and then got down to the business of writing.

The series launches this month with Liane’s intro/anchor story, WICKED TEMPTATION. She introduces us to Trey and sets the stage for his travels and his redemption. The series continues in August with Alice Gaines’ story set in Victorian England, TO TOUCH A WOMAN. September brings us Anne Rainey’s hot contemporary, RECKLESS EXPOSURE, and Oct. rides in with Titania Ladley’s Western, RENEGADE AND HIS REBEL. I stayed with my favorite genre, contemporary romantic suspense for my story, TRIPLE THREAT, which comes out in November.

The idea for my story came from our initial conception of Trey as a lonely traveler, who picks up couples on the road. The original name for our series was Three for the Road. I brainstormed about situations that would lead to couples being stranded on the road, and from that I created the characters of Brandy, a rootless Vegas showgirl with a hard-scrabble past growing up in foster homes and Ridge, an embittered FBI agent with a black spot on his record and something to prove. Brandy’s on the run from both the mob and the FBI after witnessing the murder of a blackjack dealer in Vegas. Ridge is hell-bent on relegating Brandy to the Witness Protection Program. Both are afraid to trust and love...until they meet Trey. 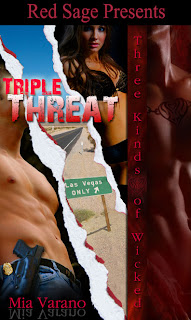 I’ve invited the authors (Liane, Alice, Anne, and Titania) of the first wave of stories from Three Kinds of Wicked to drop by Fierce Romance today to share how they developed their stories within the framework of our series, and to discuss the challenges and the excitement involved in writing a series of this kind.

Visit the Three Kinds of Wicked website, and don't miss one minute of Trey's adventures!

By Mia Varano at July 02, 2009
Email ThisBlogThis!Share to TwitterShare to FacebookShare to Pinterest

Thanks, Carol, for asking about the inspiration behind our Three Kinds of Wicked stories.

Once my plotting buddy, DH and I hammered out Trey's through line in the series, that left me having to write an anchor story where Trey would find his ultimate lady love.

For some reason, the realization that my stories would be anchoring this series paralyzed me. Worse, I'd never written a menage story before, and had no idea if I even *could* write one.

One afternoon, my daughter was playing the soundtrack to "Across the Universe", and something clicked inside my mind. What better place to explore sexual boundaries than during the Summer of Love?

After banging on my keyboard to the tune of that same soundtrack for a while, Sage and her fated lover, Russ were born. To say I fell in love with this couple and their heart wrenching journey was the understatement of the century.

Trey certainly had his work cut out for him in winning Sage's love. Because of this, Wicked Temptation is an angsty, emotional read, and I can truly say I've never had more fun or spent more tears in writing a story.

Now I'm busy at work on the series end story, Wicked Redemption. Will Sage win his lady love at the end of his sensual journey? Will Russ's soul heal enough to lead him to his own happily ever after? I can hardly wait to find out!

Liane, that's what's interesting about working on a series with other authors. You're all in this creative process together, throwing ideas around, making suggestions, giving encouragement. But in the end, it comes down to you and the words on the page - just like it always does.

The idea you all came up with is great. I wish you much success! :)

Thanks, Stacey. I've seen some of the stories, but it will be fun to read them all in order.

Wow, I'm still drooling over the cover for my story, To Touch a Woman. And how about that trailer?

I love my couple, Margaret and Edward Sinclair. They're in danger of losing their love if they don't get some help with the physical aspect. Trey's the perfect teacher, and Edward is a real man who'll do whatever it takes to make the woman he loves happy.

I'm so excited Liane included me in this project!

Alice, ah, Edward is a real man, or at least I know you're going to write him that way!

Sounds like an awesome, fun series! I love the video! Congrats!!

Nicole, we have the marvelous Rae Monet to thank for the video and the website and the covers and the logo.

So looking forward to reading all these stories! H-O-T HOT! I think mine--THE PLEASURE PRINCIPLE--is slated for Dec. or Jan. I can't quite recall, but it's exciting to see the series unfold, especially after all the work Liane put into it!! And we were so fortunate to get Rae Monet as our cover artist. The covers are sizzling-hot and the website and blog are absolutely beautiful!!

And then there's the sinfully delicious Trey... *sigh*

Calista, I can't wait for all the stories. I'm curious to see how
"my Trey" changes.

I love the way all of your brainstormed this idea for a series.

All of you owe Liane's hubby for coming with this idea. It's terrific.

Rae did a great job on your trailer and website.

Sounds like a smoking hot series, and I love the way you guys came up with the idea. :-)

Wonderful idea! I always wondered how a collaboration might go, so it's cool to hear how you guys brainstormed.

The series really sounds fantastic. Wishing you loads of success and Huge sales!!

Sandy, we should all come up with a way to show Liane's husband our gratitude (evil laugh).

Donna, Trey is so smokin' hot, I got a thrill just writing about him! LOL

Thanks, Chiron. The brainstorming was a blast!

I can't wait to read all the stories in the series. It's been a thrill to be in a project like this. :)

Hey, Mia! I'm late chiming in due to being out of town for much of the last few weeks, but I just wanted to drop in and express my thanks for inviting us here to chat about our Three Kinds of Wicked contributions. Thanks also to Rae Monet for her amazing talents in creating our smokin'-hot covers, website, and trailer, and to Liane and her hubby for their part in helping to develop this awesome series. :)

Somehow, when we settled on the concept of our Trey being a time-walker, I instantly knew I would write an historical---it's my fave genre, and since I adore westerns but hadn't yet written one, my Calamity Jane-like heroine in RENEGADE & HIS REBEL was born. She's a gun-toting, tough-as-nails, quirky woman for the time period, and she presents a real challenge to both her estranged husband, Renegade, and to Trey. So how else to tame a stubborn woman such as Rebel but to lasso and corral her between two hot men? *evilest of grins*

I'm so excited and honored to be a part of this series! I'm looking so forward to each book releasing, and to hearing readers' thoughts on all the unique stories we're offering them. :)

Have a fabulous week, everyone!