Great Review for The Cottage Next Door! 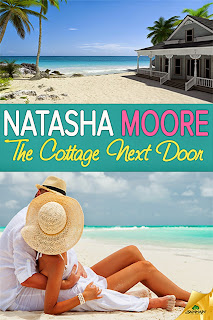 This review for The Cottage Next Door appeared on Amazon recently-

"What an amazing writer! SO glad these 2 people got a happy ever after. Lush, romantic and profound. two people who's experienced loss and grief find each other and help each other heal. powerful"

I don't think I've had a better review ever!

Writers can get a bit down from time to time. The writing might not be going well. Sales might not be what we've hoped. We wonder if we should be writing something different or whether we should even keep writing...

I'm going to pull this review out when I'm feeling down to remind myself that I must be doing something right. And it will be inspiration for me to continue writing the kinds of stories I love to write.

Here's an excerpt from The Cottage Next Door:

Sylvie squinted as she stepped out onto the deck into the sunshine the next morning. Hunter stood on his deck, cradling a large mug in his long-fingered hands. He wore khaki shorts and a T-shirt that for once didn’t look as if it had been slept in.

“Morning,” she said cautiously. Her shirt, on the other hand, had been slept in. She hadn’t done more than pull on a pair of white shorts before she stepped outside. She’d had to get some fresh air. The walls had quickly closed in on her after she woke from tangled dreams of Matt. And Hunter.

He held up his mug. “I made a pot of coffee. Probably not as good as yours would be, but it’s hot and full of caffeine.”

“Perfect. Thanks.” She crossed the deck, the surface already warm beneath her bare feet. Hunter was back out in a moment with another mug and handed it to her over the railings.

“Taste it before you say too many good things.”

The small smile on his face was a bit disconcerting. Sylvie took a sip. Stronger than she usually drank it but not bitter at all. “It’s good. Thanks.”

“No problem. You can come sit over here if you want.”

She noticed for the first time that there was a second chair, a chaise, on his deck. He’d surprised her so much that she didn’t move. Didn’t know what to say.

“I was going to cook up some eggs. To pay you back for dinner.”

“And to apologize for being such an ass.”

He chuckled. This time Sylvie was able to see his face when he did it, and the way his face lit up made her breath catch. If she’d been attracted to him when he’d been surly, he was ten times more attractive now.

Hunter set down his mug and reached out his hand. “Help you over?”

She laughed, a quick, surprised bark. “Thanks. No. I’ll use the stairs.” She turned toward the steps, then realized that she still wore her nightshirt and hadn’t even looked in a mirror this morning. “Um…I’m going to change into some real clothes. And untangle this hair.” She set the mug down on the railing and slapped her hand over her mouth. “And brush my teeth.”

She stopped her retreat and turned back. “Yes?”

His hazel eyes flashed. “Your tangled hair is very sexy.”

She rolled her eyes and ducked into the cottage. What had happened to the beer-chugging asshole her neighbor had been up until now? Did something happen last night when they’d been talking about the ocean and spouses and…oh yeah, they’d talked about sex. Her face burned as she remembered how she’d practically thrown herself at him.


The Cottage Next Door is available at your favorite ebook vendor.