My New Cover - Flaunt It

I'm so excited to be able to share the cover for my upcoming release from Samhain, Flaunt It. 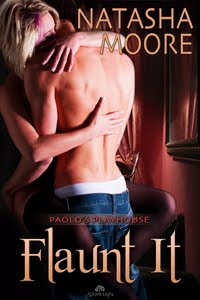 He’ll put her on display, if that’s what it takes to keep her…

When it comes to sexy and sassy, Piper, the most popular waitress at Ben’s bar, has it all going on. Now that they’re dating, though, Ben wishes she’d dial down the skimpy clothes and flirty attitude, and her habit of dancing around the bar and flashing to her favorite song. Every teasing peek at her body, every laugh at some customer’s lousy joke, is certainly good for business—but it sends his jealousy meter into the red zone.

Sure, they’re dating, but he’s no muscled, tattooed stud with diamonds in his ears. How can he compete, especially when she refuses to even spend the night at his place?

Flaunt It is the first in the Paolo's Playhouse series and will be released on March 22nd.

Can you tell I'm excited?

Every time I see something about your Paolo's Playhouse series, I get excited!

Looks hot and yummy! This is on my wish list for sure! Congratulations on the new cover and series!

Sounds good. I like the twist on him not being a studly stud. Good luck!

Thanks, Miranda! Just as I get excited when I hear about your Come Again series :)

Hi Carly. Ben is one of my favorite heroes. He was very real to me.

Sounds like a hot read! And I love the cover!

And that's a great storyline. Nice that the hero is regular guy. :)