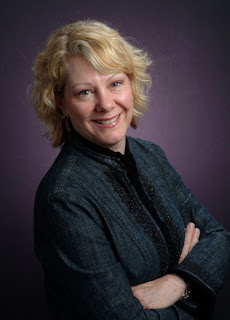 Who says an intense historical can't have its share of humor?

Humor is timeless; people laughed in every era. You know as well as I do that some Neanderthal somewhere tripped on a rock, wind-milled his arms frantically, and fell on his arse in the mud. And someone was laughing. Hard.

Humor makes manuscripts more believable. Humor makes characters more real. It can keep a scene from becoming overly maudlin or sappy. Or harsh. It can start - or halt - an argument. Besides that, life is funny.

And it can get an author out of some boring situations. For example, I just finished the draft of a book that has a medieval knight staying on a Scottish border estate. He is assigned a valet as a matter of course. But I got really tired of mentioning when the man came into the room. It simply wasn't interesting.

So I stared having him just appear - and kind of freak out the hero:

The first "odd" reference:
Drew wanted to ask Jamie what specifically had happened. How Eryn could be accused of murder. Who witnessed any part of Geoffrey’s demise. When had she left the estate.
But as he stepped around the maids still scouring the bloody stones, he couldn’t make a coherent sentence.
Jamie led Drew to the room that was once Eryn’s. To the bed where he slept a full, blissful night beside her.
“The Lady moved into the master’s chamber,” Jamie answered Drew’s unspoken confusion. “I’ll have ye in here now.”
Ian began to help him undress, though that was not Drew’s intent.
Where did he come from? Drew mused. That man always seems to materialize out of air.

The second reference:
Drew pulled a deep breath and blew it out. “I believe I ken where she’s gone—”
“Elstow Abbey?” Jamie interrupted.
“Aye. And she’s canny enough to ride low and no’ be noticed. Do ye agree?”
“I do.” The steward looked hopeful.
“So now I must find out what made McDougal so angry.” Drew stood and wiped his mouth. Ian suddenly appeared at his elbow with a clean tunic over his arm. “How do ye do that, man?” Drew sputtered.
Ian looked at the garment in his hands. “Water and a brush. Why?”

The third reference:
“I’m afraid we met with some unfortunate circumstance on our travels, and this sorry apparel is all that I now own,” Drew said to the smiling steward. He pulled at the fabric. “I fear that even Ian might not be able to salvage these.”
“My lord, you do me a disservice,” Ian said.
Drew startled. He looked over his right shoulder. “How long have you been standing there?”
The valet looked puzzled. “I only just arrived, sire.”

It's not slap-your-knees funny. It's just quirky-make-you-smile funny. The key to a running gag is for it to happen three times. Less doesn't cement is as a "thing" and too often can get old. Three or four. Perfect.

Of course, intentionally funny single scenes can happen as well. This scene isn't in my book. But it could have been:

Geoffrey stomped toward his steed, having said his piece brilliantly and given the pompous knight a solid earful. He gripped the saddle's pommel and jammed his boot into the stirrup. One swift toss of his leg and he would gallop away, spitting dust on the man's velvet cloak.
He hopped up, putting all of his weight on his left leg and lifting his right - when the saddle slid under the belly of the gelding and Geoffrey landed flat on his back in a puddle of still-warm horse piss. 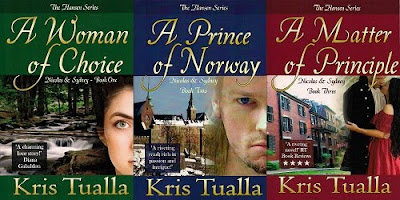 In A Matter of Principle I have a running gag between Nicolas Hansen and his adolescent cousin Leif, whom he has adopted. It refers to an offer made by Nicolas's ex-whore to de-flower the teenage boy, and is referred to by Leif on several occasions. His wish to accept the offer is amusing, eases tension at the end of hard scenes, and it reads believably.

I can't help it. My characters have enough of me in them, that they are always finding the ridiculous connection - and they say something barely appropriate or quirky at the oddest times.
So. Isn't it time you found a new brand of hero? Norway IS the new Scotland, after all.

For every 10 people who comment here, I will give away one free e-copy of A Woman of Choice - the beginning of the trilogy. And, yes. Commenter #11 warrants 2 copies! Comment #21? I'll give away three.

In February at the end of my blog tour, I'll give away one SIGNED PAPERBACK SET of the trilogy. Here's how you can get in on that deal:

1. Go to http://www.kristualla.com/ and find the "Secret Word" on my home page.
2. Send an email to ktualla@cox.net with "Signed Trilogy Giveaway" in the subject line. Put the secret word in the body.
3. Comment on any blog at any time in the tour to activate your entry. Each day's blog location is listed at http://kristualla.wordpress.com/blog-tour-dates-locations/

A Woman of Choice, A Prince of Norway, and A Matter of Principle are all available at http://www.goodnightpublishing.com/

A Woman of Choice - Missouri Territory, 1819
A woman is viciously betrayed and abandoned by her unfaithful husband. She is rescued by a widower uninterested in love. In desperation, she becomes engaged to his best friend. One woman, three very different men. Life is about choices.

A Prince of Norway - Christiania, Norway, 1820
American-born Nicolas Hansen has been asked to candidate for his great-grandfather's throne. His new wife Sydney isn't about to let him go to Norway and face that possibility alone. The moment they arrive at Akershus Castle, the political intrigue and maneuvering begin. Can Sydney trust anyone? Will Nicolas resist the seduction of power? Or will he claim the throne for himself? Most importantly: will their young marriage survive the malicious mischief of the ambitious royal family?

A Matter of Principle - St. Louis, State of Missouri, 1821
Nicolas Hansen has returned from Norway determined to change the world. But when he runs for State Legislator in the brand-new state of Missouri, the enemies he made over the past two years aren't about to step quietly aside. Sydney has made enemies of her own, both by marrying Nicolas and by practicing midwifery. When a newspaper reporter makes it his goal to destroy them, Nicolas must rethink his path once again. But this time, it's a matter of principle.
By Nicole North at January 21, 2011
Email ThisBlogThis!Share to TwitterShare to FacebookShare to Pinterest
Labels: A Matter of Principle, A Prince of Norway, A Woman of Choice, historical romance, Kris Tualla, Norway, writing humor

Welcome Kris. I love humor in a book. Doesn't have to be ROFL. A touch can lighten the story, as you say. Good luck with your series. Norway is something new.

I love quirky humor in stories. Some of my favorite reading time was giggling through stories. I love how you work them through the excerpts you shared. No wonder you sell so many stories!! Best of luck with all of your stories.

I actually had a lady at a book signing flip through my book - find a funny scene by random - and buy the book because of that.

"Historicals never have hunmor!" was her complaint. I aim to change that!

I'm sitting here reading your post and nodding. Humor? Definitely! Of course, adding humor to writing is my natural style too, so you had me from the word go. I loved your Ian snippets. I could just imagine the expression on his face when he said he'd been there all the time.

I love humor! Great interview. Thanks for being here today!

I've heard the advice of sets of three for the humor to work. And it does really seem to work that way. I'm glad to know that humor works in historicals.

I agree - humor is essential - and very hard to do well, so I offer my kudos, Kris! The rule of three makes sense - I used to chuckle at the head-slaps in NCIS, but after the 4th, 5th, and 40th times - not so much. A deft hand is required.

Thanks so much for being our guest, Kris!! I enjoyed it!!

The winner of Kris's book is... Dana!! Congratulations! Please email me for info on how to receive your free book.
nicole @ nicolenorth . com
(without the spaces)

Thanks, everyone, for commenting!