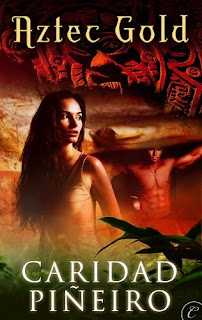 I’ve been blessed with many things in my life, including the chance to visit over a dozen countries as a result of my full-time job, but that’s not necessarily a good thing. You may be wondering what could be so bad about that? Maybe that I am really afraid of heights and hate to fly.

Despite that, I have on more than one occasion forced myself onto that plane to venture to that new place and I’ve never been disappointed. Scared, surprised and sometimes inspired, but never disappointed because as I said, it’s a blessing to be able to do this.

One of the trips that I took stayed with me and inspired AZTEC GOLD which is set in the Mexican jungle. During a visit to Mexico City, I was able to journey to Teotihuacan, a pre-Columbian city that has some of the world’s largest pyramids.

As soon as I set foot in the Avenue of the Dead, named for what the Aztecs thought were tombs along the sides of the thoroughfare, I knew I had to write a story set in a similar locale. 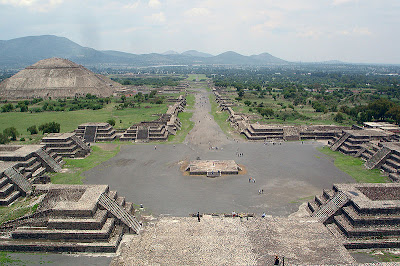 So I wandered along the avenue and the many paths leading in and out of it and the pyramids of the sun and moon as well as some of the other smaller tableros, ceremonial platforms with small temples atop each one. There were gorgeous murals and I discovered some of the history behind the city, including that ritual sacrifices were likely done there. My writer’s mind immediately pictured the city housing the home of one of the goddesses to whom they might have made such sacrifices.

I continued walking until I reached the Pyramid of the Sun, the taller of the two structures. Here is where I met a real challenge. Stay at ground level or risk a climb to the top to where the ancient inhabitants of this city believed the greatest energy could be felt.

Fear of heights, remember? Well, I forged ahead and climbed to the top which was actually the easier part of the trip. 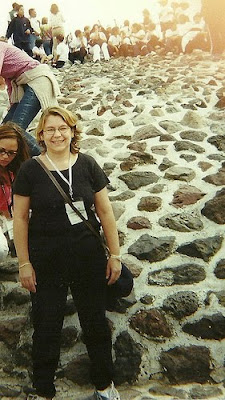 The view at the top was amazing. I was able to look down on the Avenue of the Dead and the Pyramid of the Moon. Imagine what the ancients must have felt as they, too, did this. Unfortunately, then it was time to head back down, a much harder task. The lines of the pyramid are steep and you feel as if you are falling headlong down the sides. At one point I had to go down on my bum, but I did it. 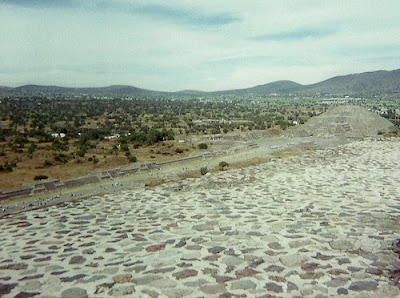 I DID IT! And because I did, I was able to not only write this book, but understand a little better about the heroine, who has her own fears she has to overcome. Cynthia is a strong woman, but the deaths of her parents while on a scientific expedition have made her fearful of adventure. In AZTEC GOLD, Cynthia has to face those fears to venture out from her safe shell and find her ex-lover, who vanished months earlier while in search of an ancient Mexican temple.

But like me, Cynthia leaves her safe zone and what follows is an adventure she is never going to forget or regret.

Thanks for dropping by!

Please check out the book video for Aztec Gold:

Thanks for having me here! I'm looking forward to reading about the wonderful places others have visited.

Wow, that sounds like an Amazing book! I would love to see those ruins one day. Unfortunately I don't have the fear of flying my husband does, and he's not real good about letting me go without him. :O(

My favorite place to visit was Scotland, the country sings to my soul. And it sings so loudly that I yearn to go back, again, and again.....

Congratulations on Aztec Gold, sounds like a wonderful read!

Thanks, Andrea. My husband has no fear of flying and is very good about holding my hand during the bumps. I would so love to see Scotland. I got to England, but was unable to do the trip to Scotland. Hope to do it one day.

Wonderful photos. We just saw a program on the history channel regarding this spectacular place. Your book sounds wonderful.

My most favorite place in the world is Scotland - anywhere in Scotland. When we visited there a couple of years ago and drove around the Highlands for 23 days, I felt like I'd come home. My Mother's family were Scottish and maybe all my Scottish genes rose to the surface because I'd go back in a heartbeat.

It was great you could visit Scotland, Paisley. Were you able to visit any castles?

I did visit Chichinitza (spelling) in MX with my dd for a school project. It was so scary. Exactly like you said about the pyramids. Tall, steep, and not engineered for safety. I did part of the descent on my butt, as well. And it was incredibly gruesome (the history).

And I hate flying.

Great pictures. Mexico is a beautiful country filled with mystery and lore. I love the Yucatan. Something about it that makes me want to go back year after year.

Thanks so much for being our guest today, Caridad! I'm with some of the others in being a Scotland fanatic. :) I'd also love to visit the Aztec ruins at some point. Looks fascinating! I love the cover and your book video. The story sounds very intriguing!

Thanks for having me, Nicole. Carly you are so lucky to have visited Chichen Itza. I've always wanted to go there and to Macchu Picchu (where a possible second story will be set). Gabriella - It would be nice to go to the Yucatan and I understand there are lots of other ruins there. The Aztecs were fascinating, but also very brutal.