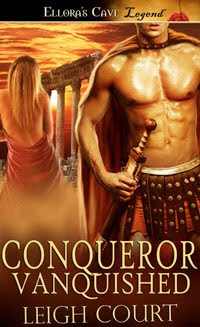 Call me a romantic, but I’ve always been drawn to history, when men were men and women swooned. Okay, it wasn’t really like that. Throughout history, women had to be strong in order to survive, but there definitely were times when men were stronger. Ancient Rome, for instance. The days of muscled gladiators and fierce Roman centurions. I’m fascinated with ancient Rome, and so it was only natural that I set my latest historical novella in 52 B.C., just as the Roman Empire conquers Gaul (ancient France). And because CONQUEROR VANQUISHED is a romance, of course my hero had to be a powerful, Alpha-male commander of a Roman legion, who meets his match in the newly conquered French healer, Solange!

>>Leonidas Danae Vorenus, commander of Rome’s prestigious Sixth legion, is ordered to establish a strategic outpost in Gaul after its surrender to Julius Caesar. But on the way to his new post, Leonidas is seriously wounded in an ambush. Only one person can save his life, and she’s his sworn enemy.

Solange is a healer. She values every life, even if it belongs to one of the hated Romans who’ve just conquered her land. Bound by her duty and now by her new position as a subject of Rome, she is obliged to tend Leonidas.

But the relationship between conqueror and conquered soon evolves into much more. Their forced intimacy ignites an unexpected attraction, and prompts the two enemies to look beyond the reason for their hatred to explore the powerful emotions simmering just underneath.<<

Since any good historical story needs to be grounded in reality, I did a lot of research for this one. Most of the information I found on ancient Rome is common knowledge, but I did uncover some fascinating, little-known facts:

- Roman soldiers baked their own bread to eat while on campaign. Every group of eight soldiers had an iron skillet that folded away in their pack just for that purpose. A soldier's daily grain ration was about 3 ½ pounds, and the army docked their pay for the grain they were given. Imagine if our army leaders charged soldiers for their meals today!

- Roman soldiers were forbidden to marry, but if they were already married when they enlisted, that was okay. You might think this rule would be a problem for a romance between my unmarried Roman commander, Leonidas, and the woman he loves, but you’ll just have to read CONQUEROR VANQUISHED to see how Leo skirts that particular issue!

- Most of our system of measurements came from ancient Rome. A Roman foot was 11.65 modern inches, a Roman mile was 5000 Roman feet (compared to our modern 5280 feet), and a Roman hand (4 inches) is still used today to measure the height of a horse at the shoulders. Fascinating stuff!

- A typical Roman fort was basically a small, self-sustaining, walled city, with a network of roads that connected several buildings including a house for the Commander, several barracks for the soldiers, stables for horses, a granary, kitchens, a smithy, even a hospital (if needed). With its high rampart walls and wide dirt moats, it was an almost-perfect, defensible stronghold.

- Since my story is a romance, I also had to research ancient Roman weddings. I was amazed at how many traditions of our modern weddings can be traced back to Roman times! Take the wedding cake, for example. After an ancient Roman ceremony, an offering was made to their main god, Jupiter, which usually consisted of cake. Once the priest had made the offering, this cake was eaten by the bride and groom, and then shared with wedding guests. Many more of our modern wedding traditions come from ancient Roman times, including carrying a bride over the threshold!

I enjoyed researching the ancient Roman empire almost as much as I enjoyed writing CONQUEROR VANQUISHED, and I’d love to know what you think of it! You can take a peek here: EXCERPT or here: http://www.leighcourt.com/ . This Roman setting is a departure from my previous two Victorian romances, but I’m obviously drawn to the past, when men were noble, and lived for honor.

What about you? Do you prefer modern men or historical men?

Welcome, Leigh! Glad you're with us today!

I love the depth of your research to bring your story to life - I learned a lot! And your story sounds completely delicious - nothing like a hot Roman general. Wonderful post!

Modern men vs. historical men? I can hardly tell the difference. lol Men still have a huge need for control IMO. And you can find real warriors in the armed services. And men still form themselves into hierarchies in every venue they inhabit. A good man is a good man, regardless. Great post. I love learning historical facts.

Thanks, Nicole, Jennifer & Carly! I'm thrilled to be here today :)

The powerful-Roman-commander-conquered-by-love definitely is a delicious stereotype to explore, but Carly is right -- a good man is a good man, regardless of the time period. Women just have to search them out!

Woo - sounds like a great read. Cannot wait to get it. Thanks Leigh

Hi Leigh,
Love a man of honor in any time period!! Great blog!

I like both contemp and historical heroes, but have gravitated toward reading contemp stories because for so long hot sex was a no-no in historicals. Well, no more! I'll be checking out this story.

Thanks Natasha, Mia, Charlene & Kelsey! We lost power here where I am in California for 2 1/2 hours (just got it back) so sorry I took so long in responding.

Charlene - No matter what the time period is, I think if a woman expects her man to be honorable, he’ll do his best to live up to those expectations, especially if he loves her!

I love reading about ancient Rome and I will have to pick up a copy of your book. Congrats on the release.

I've never read a gladiator romance but I'm intrigued. Sounds like you did a lot of research.

Thanks, Georgie! You'll have to let me know what you think of it after you read it :) Even though it's a sexy story, I'm all about the *emotions* of the romance!

Sondrae-
My hero Leo is a Roman legion commander, not a gladiator, but he certainly has the powerfully muscled body of a gladiator, LOL!

And yes, I did do a lot of research for this story, but I enjoyed it because you can find out so many fascinating things about different times and different cultures! My historical stories can teach you things as well as entertain you :)

I know I'm late to this party (so annyoying when your job gets in the way, right?) but I wanted to say I *love* stories where the guy discovers what's really most important in life (love)!

Can't wait to read this one, Leigh!

Thanks, Loretta! Leo has the heart of a lion when it comes to both loyalty and love :) Let me know what you think of the story!