A Ghost and a Haunted House

This is Halloween Week. A spooky week of ghosts and witches and goblins. Costumes and trick or treating and haunted houses. I thought I'd take a peek at my backlist and feature a couple stories that fit right in with this week's theme.

Cursed to wander Logan Point, lusty pirate Nathaniel Quinn must resist the call of the sea. But nobody said anything about resisting a beautiful woman like Miranda Kent, the newest owner of the lighthouse. So what if their love is doomed? Doom is familiar territory for a ghost like Nathaniel....
Where do bad boys go when they die? If the bad boy is a pirate captain, he goes to shore.
Cursed to haunt dry land for three hundred years, forbidden to touch the ocean he loves, Nathaniel Quinn’s spirit lingers near the Logan Point Lighthouse until his sentence is served. All he wants is an end to the three hundred year curse so he can haunt the seas instead of the shores.
That’s all he wants, that is, until the day Miranda Kent buys the lighthouse with the intent to turn it into a bed and breakfast. She hopes the presence of a ghost will bring in the tourists, but Quinn has finally found a benefit to his time on land.
She can hear him. See him. Touch him. He may only have a short time remaining at the lighthouse, but at least now he can enjoy it like a sailor on shore leave.
But pleasure turns to impending pain as these doomed lovers discover they’re touching more than each other’s bodies. They’re touching each other’s hearts. The long-awaited end of Quinn’s shore curse might just mean a different kind of curse…
Because an eternity sailing the seas might also be an eternity separated from the woman he loves.

Haunted House - Nothing to Fear from Ellora's Cave 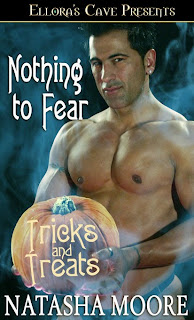 Mason's dark good looks and domineering personality give Kelly all sorts of forbidden fantasies that frighten her. When she agrees to help out at the community Halloween haunted house, she never expects to be tied to a bed, playing damsel in distress to Mason's masked, whip-wielding villain.

Kelly can't run away from Mason this time. He knows she's fighting her sexual needs and he hopes that a few hours of playing out her fantasies with him will prove to her that bondage — and Mason — are nothing to fear.

If you're in the mood for a little Halloween romance, both Quinn's Curse and Nothing to Fear are still available for download.

So do you have any other recommendations for Halloween related romance?