I love to read and write fantasy stories, so it’s no surprise that I have one published. For me, the best fantasy comes from playing the “What if?” game. As a true romantic, I always want a happy ending, so when I heard about a horrible practice in ancient times, I had to write the tale where this terrible event would take place and then end happily.


The custom I read about was this: On the eve of her wedding, every woman had to sit by the side of the road and offer herself to the first man who came along. This took place, I think, in the area of Greece. I can’t remember if the “victorious” man had to make an offering to the local temple, but I do know that many such customs sacrifice women to the benefit of someone else. So I put that financial spin in my story.

I couldn’t get the image of these unfortunate women out of my head. Imagine – whoever comes along gets to deflower you. Hmmm, not pleasant. Of course, we all know a similar custom that took place in Europe in medieval times called the droit du seigneur wherein the local Lord also had rights to a bride on the eve of her wedding.
So this tidbit stuck in my head and I had to do something with it. I could hardly make it a contemporary story. I don’t write historical. So, that’s the beauty of fantasy. You make up your own world with its own rules and then you spin the tale within them. It’s fun for a writer, and hopefully for the reader as well.

This fantasy takes place in the future, on a far distant planet. Galatea wears the Star Necklace for one year, the sign of her countrywomen’s faith in her ability to improve their lives. But tonight her virginity is being auctioned in an important religious ceremony. She must do her duty – but Ronan, an off-planet warrior appears, determined to save her though his own life may be forfeit in the attempt.

Here’s an excerpt from The Star Necklace:

Galatea’s heart leapt in her breast—with fear, with incredulity, with an emotion she couldn’t name. Standing on the dais in the midst of pandemonium, she fought to remain calm and to silence this unknown emotion quivering deep within her. She’d tried to accept the idea of Sheckel winning, of feeling his thin, seeking body assaulting her tonight.

But this fortune offered by Ronan, the Otherlander, simply defied comprehension. What game did he play, one man alone in a hostile land? She’d seen the intelligence in his eyes and the wariness in his every move. But apparently he didn’t know the fate most Otherlanders suffered on this planet.

Certainly, the Temple priests would never let him have her. As much as his bid represented a fortune they wouldn’t let slip away, his life would be forfeit.

As if he’d heard her thoughts, Sheckel leapt to his feet.

“Seize the Otherlander! He doesn’t have ten thousand marks. He mocks our sacred rite!”

Galatea’s heart froze with the certainty that Sheckel was right. No one had that much money.

She braved a glance at her bidder. He looked calm but tense, his mouth an unyielding slash in his granite jaw. He’d shaved his beard and the strong lines of his face showed a stark beauty like that of a nighttime thunderstorm. Unknowable, uncontrollable, but electrifying in a heart-stopping way. His gray eyes watched coldly as half a dozen armed men approached him.

The guards hesitated, none wanting to be first to lay a hand on him.

The Otherlander’s lips curved up toward his hard eyes, carving his face in a mockery of a smile. Slowly, he withdrew his hand from his pocket and opened it.

Ten round coins gleamed blackly in his palm, their smoothly shiny surfaces giving no hint of the power they represented. The number one thousand winked in silver splendor on the face of each coin. He flexed his hand and a rainbow hologram danced across each number, decorating his palm with color.

A long sigh swept through the audience. Virtually none of them had ever seen a one thousand mark coin, and the fortune represented by ten of them seemed incalculable.

“Is Galatea mine for the night?” Ronan’s strong voice rolled through the hall like a thunderbolt from the heavens.

“Seize him!” Sheckel called out again, a thin note of desperation snaking through his voice. He raised his arm in command. “Seize the Otherlander!” 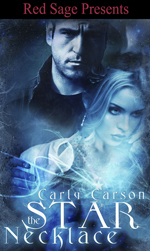 Sounds like a great story, Carly :) I like fantasy romance for the same reason, you can use scenarios that wouldn't work in the "real" world, but are awesome all the same.