As part of the monthly Jewels series Ellora's Cave had a couple years ago, I wrote a story for September, where a major element in the story had to be a sapphire. I came up with the idea of of the sacred Sapphire Moon and the Guardian who watches over it. It's a story of forbidden romance, one of my favorites.

As Guardian of the Sapphire Moon, a crystal globe with a sacred sapphire embedded in the center, Lia must witness couples mating after they receive the Moon’s blessing. But she can never enjoy the pleasures of the flesh herself.

Weary warrior Roark has come back home to try to forget the horrors he’s lived through. He always believed Lia was his true mate and his body heats with desire for her. Then he’s told it’s forbidden to mate with the Guardian. How can he ignore the lust rising between them?

But a warrior doesn’t take no for an answer.

Writing a fantasy romance is a lot of fun. You get to create your own world, make up your own rules, and come up with as fantastic a situation as your imagination can create. But no matter how unreal your world may be, the characters in that world must be believable, and their emotions every bit as strong as yours or mine.

And a short excerpt:

Lia turned then and feasted her eyes on the returning warrior. He’d grown taller, broader, harder since she’d seen him last. His skin was tanned dark. She’d heard that two suns heated the desert world where the war had been waged.

As he stood there staring at her, he appeared to be carved from stone and polished smooth. She almost reached out to brush her fingertips along his high cheekbones, but she couldn’t indulge in such weakness. She straightened her shoulders and braced herself against the foolish attraction she felt for him. “You have to go, Roark.”

He nodded, but he didn’t move. “I didn’t know it was you. When I heard the shouting and came in. I didn’t know.”

She swallowed hard. Her throat still hurt, but not as badly as her heart. “I thought you were dead. The reports said you died in battle.”

The lazy shrug couldn’t hide the pain she saw in his eyes. “Not quite.”

Oh that he could touch her. If only she could touch him as well. Feel those hard muscles beneath her fingers. Feel his mouth on her skin. A shiver ran through her, sending tingles along her skin and concentrating between her legs.

If the news of his death hadn’t arrived just before the Council came to her with their offer, would she have agreed to become the Guardian? She and Roark had grown up together, become closer as the years went by. She’d dreamed that he would be turn out to be her true mate. When her parents broke the news of his death, grief had paralyzed her. She couldn’t breathe. Couldn’t imagine her life without him in it. She’d grasped the chance to be Guardian as a way to live out the rest of her life without her mate.

Now he was back. But it was too late.

Tears pricked her eyes. “You must go. Before someone from the Council comes.”

Roark looked as if he was about to say something, but stopped, tightening his jaw. He bowed stiffly. “It was good to see you again.”

“Thank you for your help.” She almost reached out to him, but grasped the folds of her robe to stop herself. “I’m…I’m glad you survived the war.”

She felt her tears slide down her cheeks as she watched him walk away without a backward glance. His stride was sensual, his movement lithe and graceful, like a wild feline. Her body shook with longing and regret. He was a healthy male in his prime. How soon before he came back with a pretty young girl to seek the Moon’s blessing?

Lia's Warrior is still available as a download. And if you prefer print, it is part of the print anthology, Sappire Sizzle. 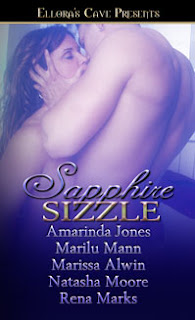 Do you enjoy fantasy romance? If so, please share your favorites. I'm always looking for a good fantasy.

Oooooooh, that's an excellent excerpt. My favorite things - a warrior, a big problem, an honorable heroine. And a cliffhanger!

Oh I forgot the most important thing you snuck in there - emotion! The pain when we realize she will have to watch him with his new mate - that was the real zinger and I just about missed it.