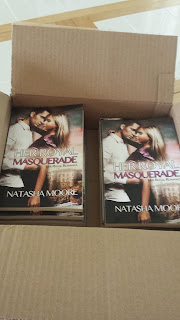 “Is that supposed to be seductive?” Mia scoffed, her voice not as steady as she would have liked. “Because it’s not working.”

“You want seduction, cara?” He was upon her in only a couple of steps, pressing her against the outside wall. He cupped one aching breast with his hand and her body arched into his touch. “What need is there for sweet words when our bodies already know what they want?”

Mia’s blood pulsed so heavily in her head, it was difficult to hear his words, sweet or otherwise. It was even more difficult to think. “You think I want to have sex with you? We’ve only shared a couple of dances. We’ve only known each other a few hours.”

“Time is not important,” he said, pressing his hard arousal against her hip. “Your body calls to me as mine calls to you. That is all that matters.”
His hand continued to gently knead her breast and Mia had to stifle the moan that threatened to escape her parted lips. How could he do this to her? How could he make her want what she couldn’t have? He wasn’t touching her, Mia. He was touching Birgitte. He wanted to have sex with a princess.

Her hands flew up to rest against his hard, hot chest. She’d intended to push him away, but somehow her fingers curled into his shirt, gathering the crisp fabric in her fists. “You presume, Vittorio.”

She had to be strong. She had to resist. “Of course, I find you attractive,” she went on, her voice sharp. “Any woman here would. I’m certain you’re well aware of your appeal.”

“I don’t care what any other woman thinks. You are the only one who matters to me.”

If only that were the truth.

No! She didn’t want to matter to him. What was she thinking? He was a prince. A prince who was going to be king someday. The last thing she’d ever want to be was a real, full time princess. And the thought that she’d be a queen? It was laughable. But Mia wasn’t laughing now. Her body was crying for this man, this prince. She had to stay strong.

“Just because I’m attracted to you doesn’t mean I want to have sex with you.”

Vittorio’s chuckle was dark, dangerous. He shifted his body so that one hard thigh pressed between her legs. Her body betrayed her yet again by rocking her hips, pressing that yearning part of her against him. “Your words say one thing, cara, but your body says something else.”

“We haven’t even kissed.” The protest was a weak one to be sure, but they were moving too fast. Rushing toward something she was afraid to embrace.

“A kiss is a prerequisite to sex?” he asked, amused. “If that is so, then I’ll remind you of the kiss we shared on the dance floor.”

“What kiss?” She forced a light laugh. “Oh, that little brush of lips in full view of the entire room? You call that a—”

Vittorio cupped the back of her neck, tugged her forward and crushed his lips to hers.

Just leave a comment and be entered to win!

Thanks for the opportunity!

Awesome. I would love to receive an autographed copy. :)

I would love to receive an autographed copy. Thank you for the chance. :)

By random drawing the winner is...

Congrats! Just send me an e-mail at natasha@natashamoore.com with your snail mail addy & I'll send it your way.

Thanks everyone for commenting :)

I'm so excited to receive an autograph copy. Thank you so much. I've emailed you my address. :)