Call of the Cougar, Next in the Cougar Shifter Series 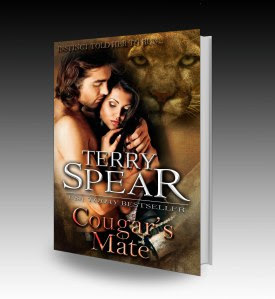 Linda did a beautiful job on these covers and even made me a heading for FB. Now isn’t it beautiful?
http://telltalebookcovers.weebly.com/pre-made-covers.html

Shannon Rafferty learns that hanging out with the bad boys could be a dangerous business, but hooking up with a cop is even worse. Now she’s on the run, trying to avoid being murdered by his cougar shifter brothers and uncle. If that isn’t bad enough, a deputy sheriff hunts her down while she’s running as a cougar and trying to survive in the Colorado wilderness. He vows to protect her no matter what she’s done. With three dead boyfriends to her name, she’s sure she will be the death of Chase Buchanan before either of them can prevent it. No matter how much she knows she has to run again, he soon holds her heart hostage. But will that be enough to keep them both alive?

Chase Buchanan—as wilderness cabin resort owner, former US Army Special Forces, and part time deputy of the small town of Yuma, Colorado that boasts a love of cougars—is tasked to track down a cougar reported to be hunting human prey. Chase soon learns she’s a shifter, not a full-time cougar, and she’s on the run. When he takes her in, he vows to protect her. After losing his wife and baby to the human kind of predator years earlier, he’s not letting Shannon’s hunters kill her, too. But how is he going to hold onto the wild-cat woman, who is unpredictable at every turn, without losing his heart to her, and then losing her as well?
Amazon
Barnes and Noble
Kobo
Google Play
ARe Books
Smashwords

I just finished A Hero of a Highland Wolf and returned it so it’s ready to come out in August.
I have 18,000 left to write on A SEAL Wolf for Sale, but then I’ll be revising it. But that’s really the fun part for me. It’s written, and then it needs to be revised.

And then??? Time for A Viking’s Highland Lass. I also am taking part in an anthology with a group of Highland authors, Kissing the Highlander, Vonda Sinclair, Victoria Roberts, Eliza Knight, Willa Blair, and me!

And then I have to write A Silver Wolf Christmas, Call of the Cougar, and Phantom Fae.
But I also have 6 conferences to go to….
I can do it. :)

But I have my first one coming up soon!