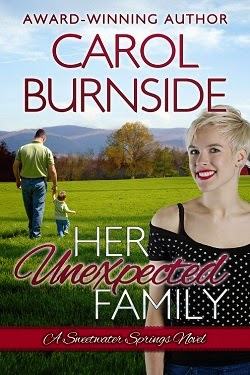 Her Unexpected Family by Carol Burnside

When I wrote the first novel in the Sweetwater Springs series, A Suitable Wife, I had no thoughts of a series. I was a green writer learning the ropes and writing simply Sam and Rosie’s story. But as the story progressed and morphed, Rosie’s best friend began to steal the show. She caught the attention of my critique partners and got rave reviews. She was funny and quirky and had crazy hair colors.
Editors wanted me to tone Claire down in ASW, and rightfully so. She was the sidekick to Sam and Rosie’s story. By then I’d learned a lot and completely re-wrote the book. I was okay with pulling her back in ASW because I knew she had to have her own book.
I also knew she had secrets and was sparse with details of her family. Was this the character that many authors talk about? The one who isn’t willing to let the author in? And why was Claire, at 22, completely on her own?
Girded and expecting the Tough One, I was surprised when Claire gave me answers like a kid shooting marbles squirreled away in her fist. She released them into casual dialogue in such a way that I had to catch my breath a time or two. To be honest, Travis responded to her revelations with much more self-control than I exhibited, seeing as his love and admiration grew with each of those released marbles.
If the initial reviews are an indication, Claire is winning other’s hearts too. I hope you will give her story a try.
- - - - -
Blurb:
This book is the second in the Sweetwater Springs series of stand-alone books by this author.

Former bad boy, Travis Baxter, has a reputation to live down, a job to do fast, and one woman he can’t seem to avoid. He’s starting a 24/7 renovation flip on Claire’s beauty salon when a surprise appears at his door . . . a three-year-old son. Immediate custody brings Travis a major problem. He needs a nanny.

Claire Larkin glimpsed a rare and appealing side of Travis during one ill-fated date, but her personal policy is no involvement, no strings. Not even a pet until she’s pronounced cancer free. With free time until her salon is done, Claire pitches in to help the grieving little boy and stunned father. Despite her best efforts to resist, she and Travis succumb to their attraction.

When it appears Claire’s cancer has returned, she pulls away and Travis is faced with a seemingly impossible decision. Protect his son from another loss or support the woman he’s come to love?

Warning: This book contains hair salon gossip, hunky construction workers, sex in the shower, sudden humor and it might tempt you to gorge on pizza and brownies. Even so, at certain points the reader may wish to keep tissues handy.

Fans of Marie Ferrarella, Tanya Michaels, Leanne Banks and Susan Mallery will enjoy this series, which contains sensual romance against a backdrop of family and community.

Book 1: A Suitable Wife (Rosie and Sam), January, 2014
Book 3: His Small Town Princess (J.T. and Cass), Coming soon
Other titles are planned for this series.
- - - - -
Review snips:
“I laughed at the humor, cried with the heartbreaking parts and sympathized with their plight as they tried to find their lasting love. Well written characters meshed with a well developed plot for true reading pleasure. Real page turner. I look forward happily to the next book in the series.” – Shirley Buchanan, Romance Book Haven  5/5 star review
~*~*~
“I recommend this read for readers that don't mind pulling out the tissues and looking like a fool when crying over a book and if you don't mind laughing out load in the middle of nowhere whilst reading.” -- Desere 4/5 star’s
~*~*~
“Be prepared to have tissues at hand. This is one roller-coaster of an emotional story. It is tender, heart-warming and at times heart-breaking. But I loved it.” – Laura 5/5 star’s
- - - - - 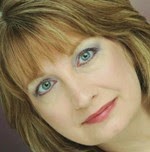 Carol Burnside is an award-winning author of the Sweetwater Springs series of contemporary romance with serious sizzle. Her personal second-chance-at-love story resulted in a marriage to her high school sweetheart of thirty-plus years. Also published in short stories, Carol’s novel length manuscripts have placed in numerous contests and won five, including the prestigious Maggie Award for Excellence.

Carol is giving away an e-copy of Her Unexpected Family. You must comment to enter. Winners picked by random.org. (Please remember to leave your email address so we can contact you.)

Thanks for hosting me today, ladies! I'll pop in later today to respond to comments. Have a great day!

Thank you for being our guest, Carol!!

Great post. I loved reading about the character's development. Tweeted.

Wonderful post! I love reading about how characters came to be! And Claire sounds like a great one!

Thanks for the tweet, Ella. Glad you enjoyed it.

Lani, I think so too. Claire really came alive for me. I think I'm a little in awe of her.

Congrats to Lani. Random.org picked you as the winner of an ecopy of Her Unexpected Family. Please e-mail me at(carol at carolburnside dot com)with your file preference (PDF, Mobi or ePub) and I'll get it out to you.