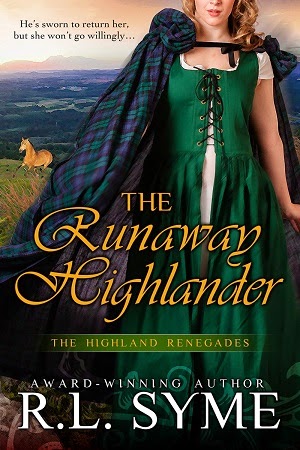 Q: Welcome R.L.! Please tell us about The Runaway Highlander.
A: The Runaway Highlander is the follow-up to The Outcast Highlander and is the story of Anne de Cheyne, who finds herself engaged to a horrific Englishman and decides to… liberate herself from the relationship. But the man who comes to return her gets more than he bargained for.
Q: Sounds exciting! What inspired this story?
A: In the first book, the main character escapes from the dungeon of Berwick and I knew that he was helped by someone. I wanted her/him to tell the story of that escape. And this is definitely that story.
Q: Why do you write romance?
A: I write romance because I think every story should have a happy ending.
Q: How did your story’s setting impact your plot or characters?
A: Actually, because quite a bit of the story takes place out on the land, the setting was very important. But because most of the story is not in the Highlands, it was some new territory. I had to spend quite a bit of time on Google maps, looking around the actual landscape of Lowich and Belford, and then Hull. England is a new place for me and while I feel like I know Berwick pretty well by now (which is where the other half of the book takes place), I had a harder time really knowing the settings of Lowich and then Hull. I definitely want to see these places now, in person.
Q: Why did you choose your setting and why was it perfect for your book?
A: I had to pick some towns (for Lowich and Belford) that were close enough to Berwick that they could be "on the way" to where the Renegades would be camped. Far enough out of civilization that they wouldn't be "found", but close enough that they could be still raiding along the border. I use Google maps quite a bit for things like distance and then, the "street view" option to be able to see the actual landscape.
Q: Please tell us about your favorite character in the book.
A: My absolute favorite character in this book is Brighde, Aedan's sister. She doesn't have a lot of a role in this particular book, but after writing the sections where she does appear, I've been very excited to get her her own book. :) She has had a hard life growing up with her father and Aedan, because he was male, had more of an opportunity to get out of the house, but Brighde was really at his disposal and it's had a major affect on her. She makes a very desperate decision later in the book that makes things difficult for Aedan, but she just doesn't know another way. I'm interested to write more of her.
Q: What is your writing process or method?
A: I tend to do a lot of character work up front, trying to get to know the people that will be telling me the story. I want to get comfortable with them, and then I do a lot of research for whatever elements of the story I don't understand yet. (Again, with the Google Mapping, lol.) I usually don't start writing now until the characters, research, and plotting are all done. And with this series, I even have my covers done. :) The writing and editing are last. But time-wise, between the three elements, I probably spend the most of my time writing.
Q: What’s next for you?
A: I'm finishing the third book in the Highland Renegades series, which is called The Highland Pirate and is the story of Malcolm Sinclair, from Book One. I'm also working on a novella that will happen between Runaway and Pirate. I'm very excited about that one. It should be called "Lachlan's Revenge" and I'm hoping it will be out in June.
Additionally, as part of the release party, we're going to be encouraging readers to take pictures of either the Kindle cover or the print book cover (which will be available soon) in some unique place. Could be your desk or your car or the supermarket or on top of your dog's back or whatever you'd like. But we want to see all the different places that our Highlander might Run away to on her #HighlandEscape. If you watch my Twitter feed (@beck_a_tron) and my Facebook page (@bighopesbigheroes) and my Pinterest board (@rlsyme), we'll be putting up all the places our #HighlandEscape happens. And if you want to participate, you can post via any of those social media outlets and @ me or hashtag the Escape and we'll spread around all the places where Anne might run. It's going to be lots of fun.
Q: Would you like to ask readers a question?

Lovely interview. Your cover is wonderful! Congratulations on your latest book!!

As always the Happily ever after. Thanks Vonda for having this interview. I have found a new author! :-)

Thank you so much, Ella. And thank you for the RT!

Thank you, Debra. I hope you enjoy it!

The Runaway Highlander sounds wonderful!! I love happy endings too. Best of luck with your new book!

Congratz on the book. This will be added to my list and also the first book. I like the bickering between the H/H or other characters best in a book. I just love to come across a good comment and just bust up laughing. I like it when I am reading a book and bust out laughing, then people look at me as if I lost my mind. I get to tell them about the book. :)

Thank you so much, Lane. I do love happy endings. :) I like knowing they're coming.

Thank you so much, Kim. I also love a good back and forth. And I love to laugh, too. Apparently, I always have a "Yoda" line, according to my editors, so I always laugh when I find that one. :)

My favorite part of a romance novel? Usually, the HEA (it's the whole point). But sometimes a truly wonderful part elsewhere in the book will make me stop and sit back, enjoying it, before I move on.
Congrats, Rebecca! Looking forward to reading this new one.