By Carol Ericson
When I was growing up, my family rarely traveled or went on vacation. We took a few camping trips to the redwoods in northern California, but not much more than that. This is partly because my parents didn’t have a lot of money for vacations and partly because they had spent the first half of their married life traveling all over the U.S. for my dad’s job with the U.S. Geological Survey, and I think they just wanted to stay in one place for a while. (Each of us four kids was born in a different state: my brother in California, my oldest sister in Arizona, my older sister in Alabama, and I in North Dakota.) Also, my dad had already seen plenty of Europe during WWII when he was a soldier in the U.S. Army in Italy, Sicily, and North Africa.
As a consequence, I always had a great desire to travel, and when the first opportunity to do so presented itself, I jumped at the chance. I was an English major at UCLA, and during my senior year one of my professors told our class about an opportunity to study at Oxford University in England for the summer. We had the choice of studying contemporary English literature or contemporary English politics at Exeter College in Oxford for a six-week program. I came home for Christmas break full of the idea of studying in England for the summer. My parents weren’t thrilled with the idea of my traveling to Europe by myself, but I was going to use my own money (well, student loan money anyway), and there was not much they could say to deter me. Soon my dad got into the spirit of the thing and began researching how I was going to get from Heathrow Airport to Oxford (this was all well before the Internet!). 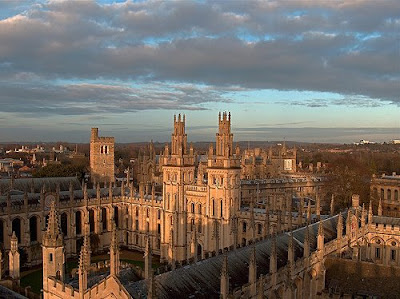 The "Dreaming Spires" of Oxford

I’ll never forget that summer. The summer school was international, so there were students from all over the world there, although most were Americans. We met in small seminar groups twice a week where we had a wine allowance and got to drink wine during the discussions! There were two lectures a week – one on literature and one on politics. But the classroom isn't where I learned the most. The program planned outings for us to Blenheim Palace, Cambridge, Stratford, where we saw two Royal Shakespeare Company plays, and a high tea on someone’s country estate. A group of us went to London for the weekend and to Paris for another weekend. 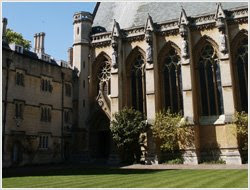 I also wandered around Oxford on my own. For those who don’t know, Oxford University is actually a collection of many different colleges. So as you walk through the streets, there are colleges housed in different buildings, very old buildings (University College was established in 1249, Balliol in 1263, and Merton in 1264), each with their own chapel and housing, and sometimes their own parks. Magdalen College has a beautiful deer park, and I used to sit under a tree there to read. There are also two rivers that run through Oxford—the Thames (called The Isis as it winds through Oxford) and the Cherwell, where you’ll always find people punting or the sturdy lads of Oxford rowing. There’s also an amazing bookstore there, Blackwell’s Books. And one of the most wonderful sites in Oxford is the Oxford dons, or professors, walking down the cobbled streets, their black or burgundy robes flying behind them. And what would a first trip abroad be without a romance? I had a summer fling with a sexy black-haired, blue-eyed Canadian, who was getting his master’s degree at Exeter. 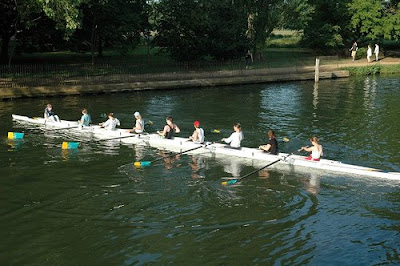 Rowers on the Cherwell River

At the end of the six weeks in Oxford, I wasn’t finished traveling. I flew from London to Stockholm and met family there. After a week in Sweden, I took off with my dad’s cousin’s son (is that a second cousin?) in his Volvo and we drove down through Denmark, Germany (or West Germany, as it was in those days), Austria, where we visited a girl I had met at the summer school, France, and Italy. Quite a journey for a first trip abroad!

That trip didn’t quell my desire to travel, rather it nourished it, and I absolutely fell in love with England. Since that trip, I have been back to Europe 4-5 times (I honestly can’t remember the actual number!) and visited other countries like Portugal and Greece. My most recent trip to Europe was five years ago, and I went with my husband and our two sons – quite a different experience. We went to Oxford, and I took them to Exeter College. As I walked under the front arches into the quad, I stood still and closed my eyes, remembering the first time I stood there as a young woman...a summer full of adventure in front of me. 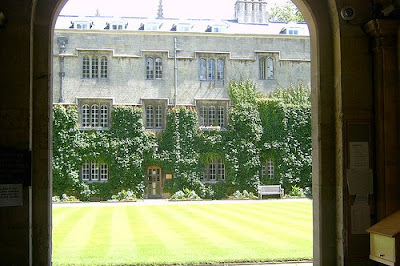 Entryway to the Exeter Quad

Wow, Carol! What a great experience for you!

I spent 2 weeks in London one year with a college group. That's the extent of my overseas travel.

Carol, that is so cool and an honor you had the opportunity of studying for a time at Oxford! I'm very proud of you!

Your pics brought back memories of my pen pal from Oxford. We corresponded for almost twenty years before losing touch. I've some treasured books on the city's history and architectural majesty she sent me, as well as many postcards, over the years.

Thanks for sharing this blog bit with us :)

Sounds awesome Carol!! I'd love to do something like that.

Really super, Carol! :) I wonder how they striped the grass like that. LOL

Natasha, I love London! I don't travel overseas so much now with kids, except for the one trip we took with them to the UK. We'll definitely go back to Europe with them again.

Shawna, Aren't pen pals great! I had a pen pal from Sweden for a few years.

Nicole, Yes, it was so much fun. I'd love to do it again.

Thanks for telling us about your wonderful experiences as a young girl. The history alone would be worth the six weeks of living there.

You can learn so much more from traveling than you can in textbooks.

The pictures are wonderful.