This past weekend my husband and I stayed in a nice cabin on top of a mountain. We even had a hot tub and a pool table for extra fun. 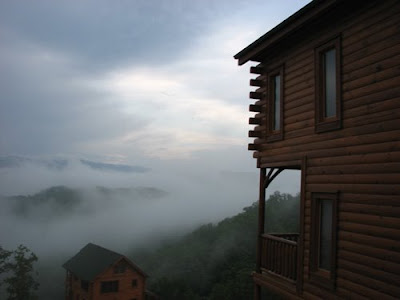 In these two picture you can see why they're called the Smokies. This fog, (mist or clouds) often lies in the valleys or sometimes cloaks the tops of the mountains. The morning we left, for instance, all we could see outside was white. But on the day or two before, the fog was lower, which gave a picturesque view. 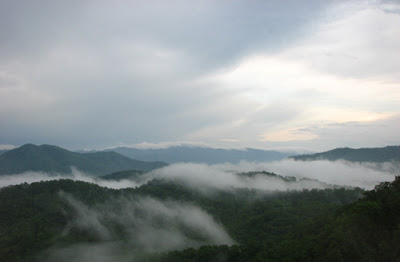 We drove to the most popular part of the Great Smoky Mountains National Park called Cades Cove which is a preserved 1800s community with log cabins, barns, fields and churches. 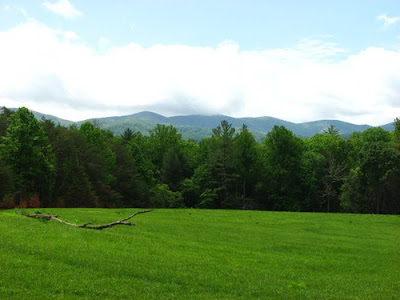 Lots of wildlife live here including deer, black bears, turkeys, coyotes, etc. We saw several deer and turkeys this time. I was hoping to see a bear with a cub but no such luck. 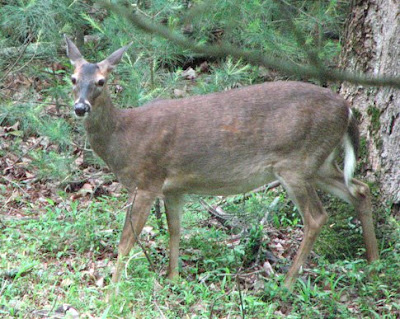 This was the first time I'd ever seen a hen turkey with little chicks. If you look closely you'll see three of the babies. So cute! 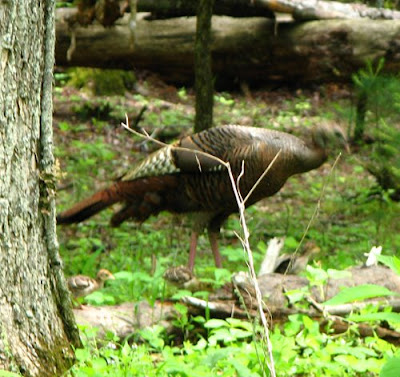 We stopped at one site and a man playing bagpipes serenaded us... and the deer. This deer in particular was enjoying his music. 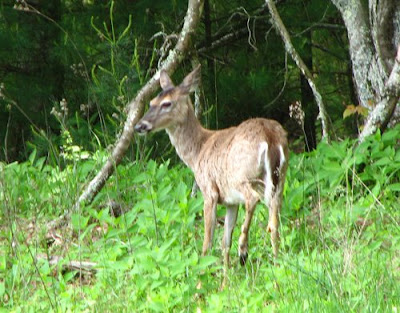 I felt I was back in Scotland (though he wasn't wearing a kilt.) I later saw that nearby Gatlinburg was hosting a Scottish Games. Our area has a lot of Scottish or Highland Games and other Scottish or Scots-Irish influences. 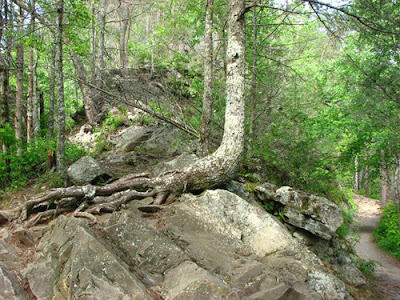 We hiked 5 miles total to visit this waterfall called Abrams Falls. The trail was smooth at times but at other times rough and rocky. Unfortunately I had on the wrong shoes for this adventure and ended up with sore feet. But I'll be ready next time. 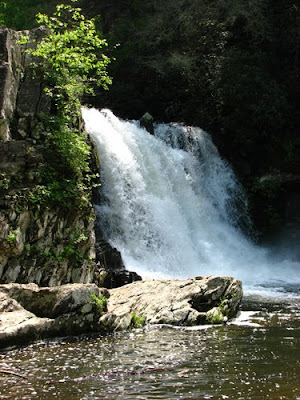 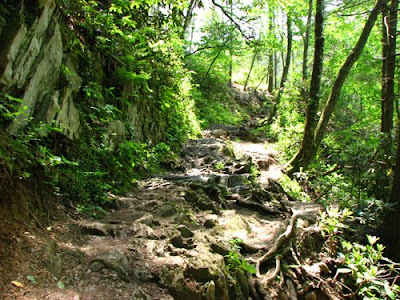 This whole area is beautiful. You can learn more about Cades Cove here. 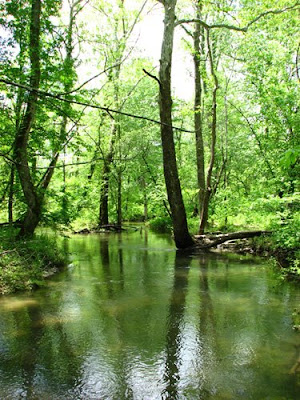 Wow! Beautiful pix, Vonda! We're definitely going to have to put this area on our "to go to " list.

We love hiking, and it looks like it would be especially nice in such a scenic area. But 5 miles does require the right shoes. My SIL hiked Mt. Katahdin in Maine in rubber rain boots. I couldn't believe it. It's a 12 hour mountain hike. She was suffering, poor thing, but she did it.

Love your pictures! Really beautiful! The "smoky" fog made me think it would be a perfect place for vampires. :)

We hiked a lot in Oregon, one of the reasons I like to set the werewolf stories there. We wore waffle stompers, great to keep from twisting ankles on rough terrain. :) Sounds like you had a super time!! Wish I could have gone along!

Thanks Natasha! Yes, it's a beautiful area and I bet you'd love it. I noticed several RV sites so you'd probably feel right at home. :)

Rubber rain boots do sound like torture, Carly. LOL My boots kinda look like hiking boots, but I learned they're not really. I didn't get blisters, thank goodness. But my feet were sore the next day. The foot massage from my DH and the hot tub jets helped a lot. Felt great! :)

Terry, Thanks! Yes, it would be a great setting for vampires. I haven't heard of waffle stompers. I like high top hiking boots but ended up getting low top Ecco Xpedition. They were the most comfortable the store had. I've been trying them out around the house so I'll be used to them by the next hike. LOL

I LOVE the Smokey Mountains! Great pics, Vonda. That waterfall looks awesome and so worth a five mile hike. Thanks for sharing.

Oh, what gorgeous and calming pictures!! Isn't Cades Cove just lovely? My family has a cabin in Maggie Valley and we'll go up to Cades on occasion just for the peace and calm and history. Thanks for sharing your mini-vacation!

Ah, memories! This California girl has only been to that neck of the woods once--but it was to Gatlinburg for New Year's Eve. Let's just say, it was a wild time involving some guys from Voldasta (sp?). No hiking or sore feet involved. Ha. You take such beautiful pictures, Vonda. Thanks for sharing!

Riley, thanks! Yes, the waterfall was great! I was surprised at how loud it roared when I was beside it.

Thanks Raynene! Yes, Cades Cove is an incredibly picturesque place. It's almost impossible to see everything there on one visit, so multiple visits are always in order. LOL How cool it would be to have a cabin nearby!

Thanks Randy! Wow Gatlinburg on New Years Eve... that does sound wild, fun and exciting. Next trip you must hike a few miles over the rock cliffs. LOL!

Wow, that looks like a really nice, relaxing vacation.

Oh Vonda, you have me drooling to be there! You have a real eye for taking gorgeous photos. How cool that the deer liked the bagpipe music. Wildlife is always a treat to see, but please note - you do NOT want to meet up with a baby bear cub whose Mama is nearby! Thanks for sharing, V!

Those are some fantastic photos! I love the view from the cabin. Frankly, I'd have settled for the hot tub instead of the hike! LOL.

What a wonderful weekend getaway. I love the pictures and seems it would have been a very peaceful time, even the bagpipes playing.

Thanks for sharing the pictures.

Your getaway had to have been awesome if you stayed in The Smokies. Really gorgeous scenery there. I'm ready to return for an extended visit :)

Thanks for sharing those beautiful backdrop and wildlife pics with us!

Wow! The photos are beautiful,Vonda! The places in the photos look very peaceful and relaxing.

Awesome pics, Vonda! I absolutely love going to the mountains. My husband and I do that once every year or two. We rent one of the cabins up on the mountain and basically hide from the world for a long weekend. So incredibly relaxing!!! We usually go in the fall though. I sit on the deck or in the hot tub and watch and watch for a bear but I have yet to see one. Perfect place for writing too, sitting on the deck, listening to nature. Hmmm... my anniversary is coming up...maybe I'll have to make a quick trip over. Glad you had a great time!

Vonda,
Thanks for the photos and your impressions. We were there last fall and drove through Cades Cove before driving to Gatlinburg, another beautiful drive in the fall. I plan to make a trip to Taos this summer, my own vacation land, to check on my parents cabin. But I'm looking forward to another week of fall in Tennesee. Really beautiful country. Thanks for the reminders!

Beautiful pictures, Vonda! I've never been to the Smoky Mountains. I love to hike though.

Carol, yes it was very relaxing. I loved it! Thanks for stopping by.

Pat, thanks! I really enjoy taking pics. Thank goodness for digital. I used to blaze through tons of film. LOL And you're right I didn't want to get near a bear. I'm terrified of them. Just wanted to take some pictures of them. We also have bears near our house, though I've never seen one personally. Hope they stay away! :)

Liz, thanks! You're right, the hot tub was far more relaxing and great feeling than the hike. Sigh.

Anna, it was indeed very peaceful. I can't seem to get away from Scottish things. LOL I love listening to bagpipes.

Shawna, absolutely. Hope you get to return soon!

Shasha, thanks! I'm glad you liked them. I enjoy trying to get that perfect snapshot.

Kim, thanks! Nice to see someone else who indulges in this type of vacation often. :) Yes, the hot tub on the deck and gazing out at that wonderful view and just relaxing. Ahh. Sounds like a great anniversary trip! Have fun!

Jeanmarie, you're welcome! I'm so glad you enjoyed them. Have fun in Taos. Had to look it up. Gorgeous place!!

Carol, thanks! I bet you would enjoy it. Lots of hiking in the Smokies. Some of the trails around Cades Cove are so long, people have to camp before they come to the end of them.

We went to the Smokies, but I was pretty little and barely remember it. Love the scenery. I could seriously come up with a great plot in a place like that!