Trip To Japan Via Florida

Since readers of this blog know that I love to travel, I have another adventure on the agenda for today…

I visited Japan about a decade ago and fell in love with its serene gardens, unique architecture, and its creative sumi-e art and calligraphy.

But Japan is more than 6300 miles from the United States, so recently, I had the chance to take a vicarious trip back to the land of the rising sun right in south Florida. Delray Beach, to be exact. I visited the Morikami Japanese Gardens.

According to the brochure, in the early 1900’s, a group of young Japanese farmers arrived in what is now northern Boca Raton and formed an agricultural colony called Yamato, an ancient name for Japan.

The colony’s farming endeavors were ultimately unsustainable, and almost all members of the original colony returned to Japan. But in the mid 1970’s, one of the remaining settlers, George Morikami, donated his land to become a park. And so the Morikami gardens opened in 1977.

Farther along the garden path is a beautiful bamboo grove. When the breeze blows, you can hear the distinctive hollow sound of bamboo stalks knocking against each other. It's quite plaintive. 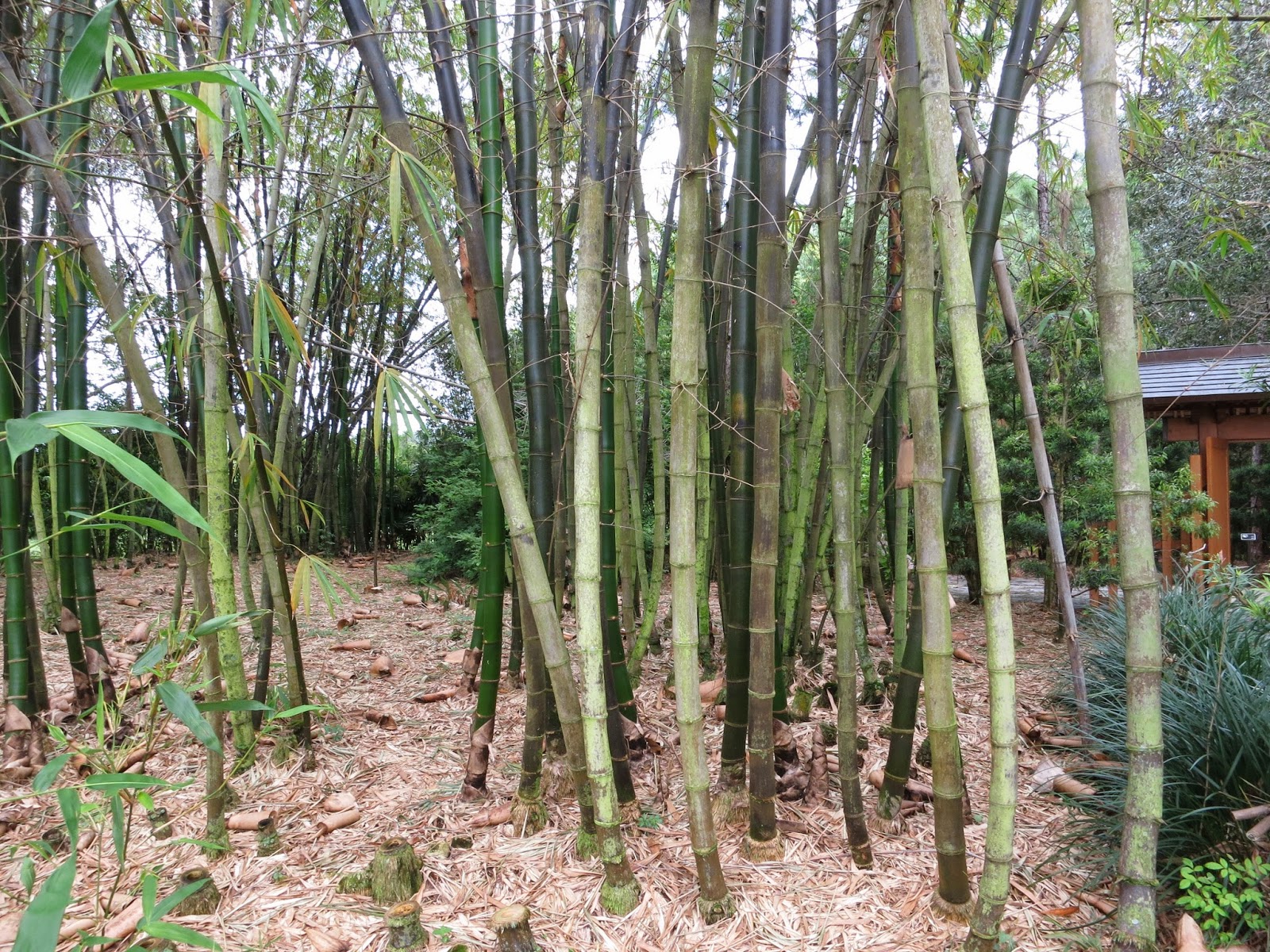 Let's go through another picturesque gate and past an interesting stone lantern... 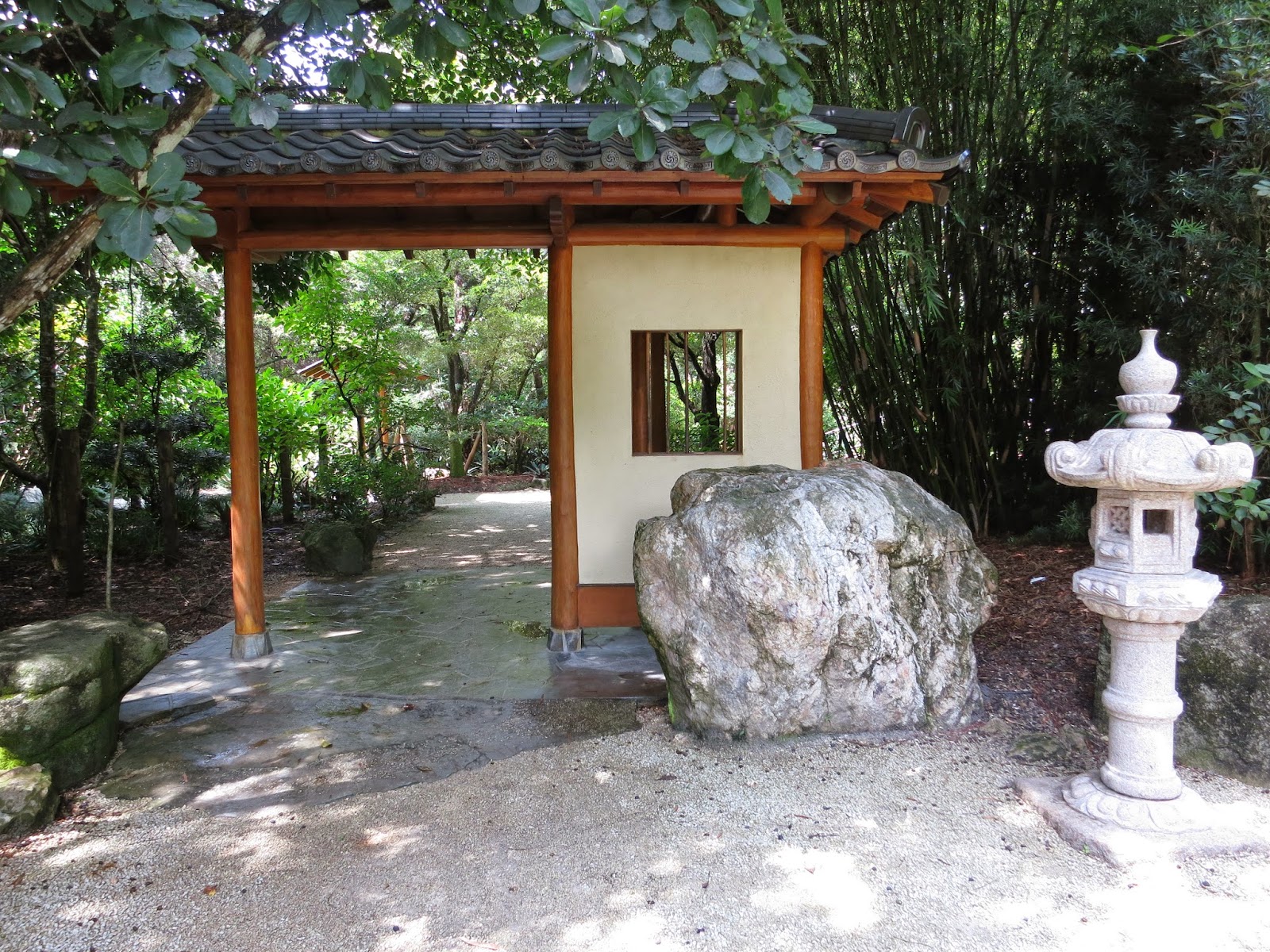 Here's something fascinating... possibly the world's first security system!  Take a look below. Water runs from a small bamboo pipe on the left into a larger one on the right. When the larger pipe is filled with water, it tips and strikes the rocks on the ground below, making a noise that scares wildlife away from the garden. When the larger pipe empties, it rises again to be filled with water, then empties again to chase those pesky critters away. Ingenious, isn't it? 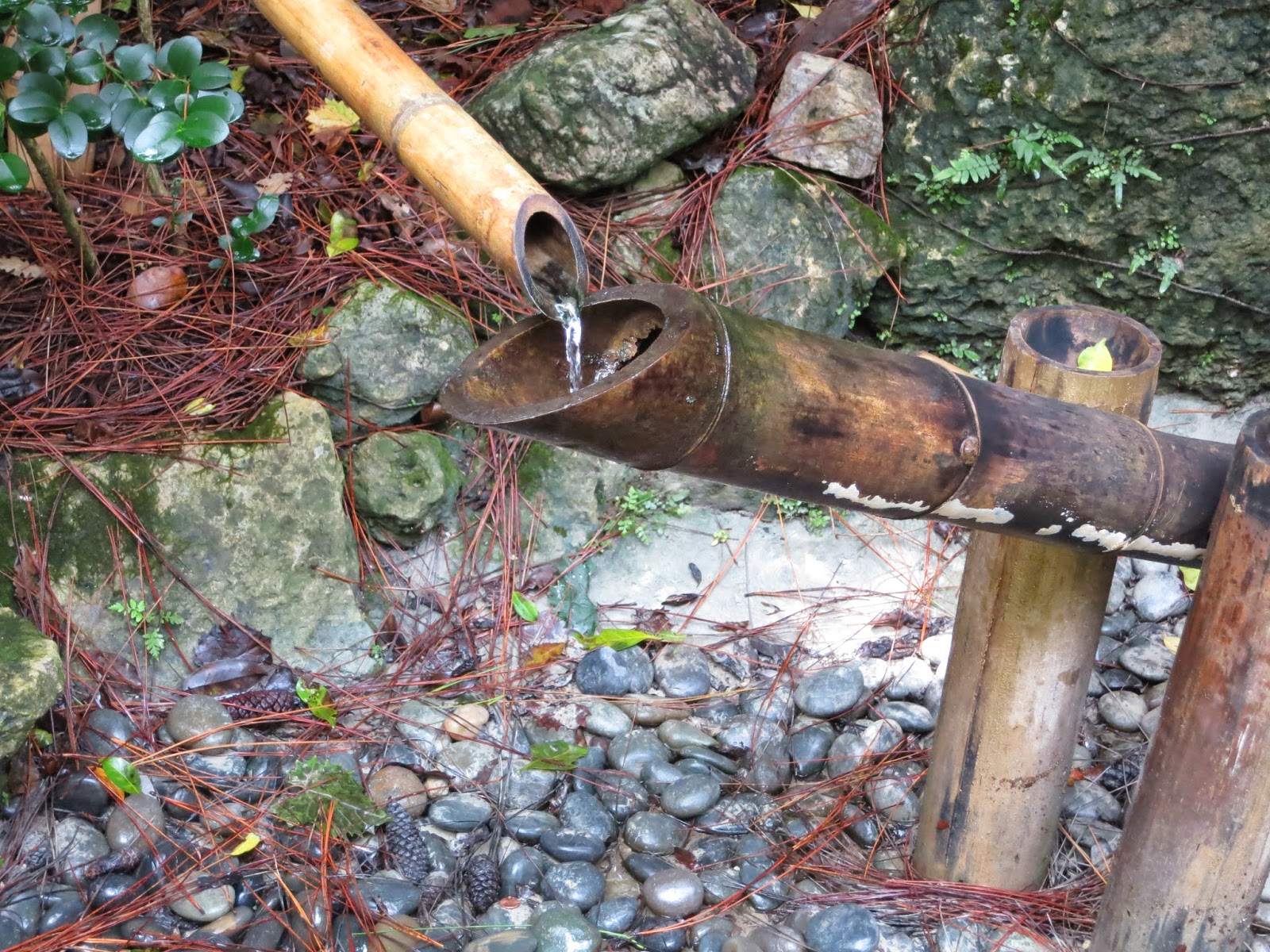 Japan is known for its spectacular Zen rock gardens, and the Morikami gardens has a fine example. The word karesansui in Japanese means 'dry landscape.' Can you see how the raking of the gravel around the large rock (in the bottom left of the picture) is meant to signify ripples of water? 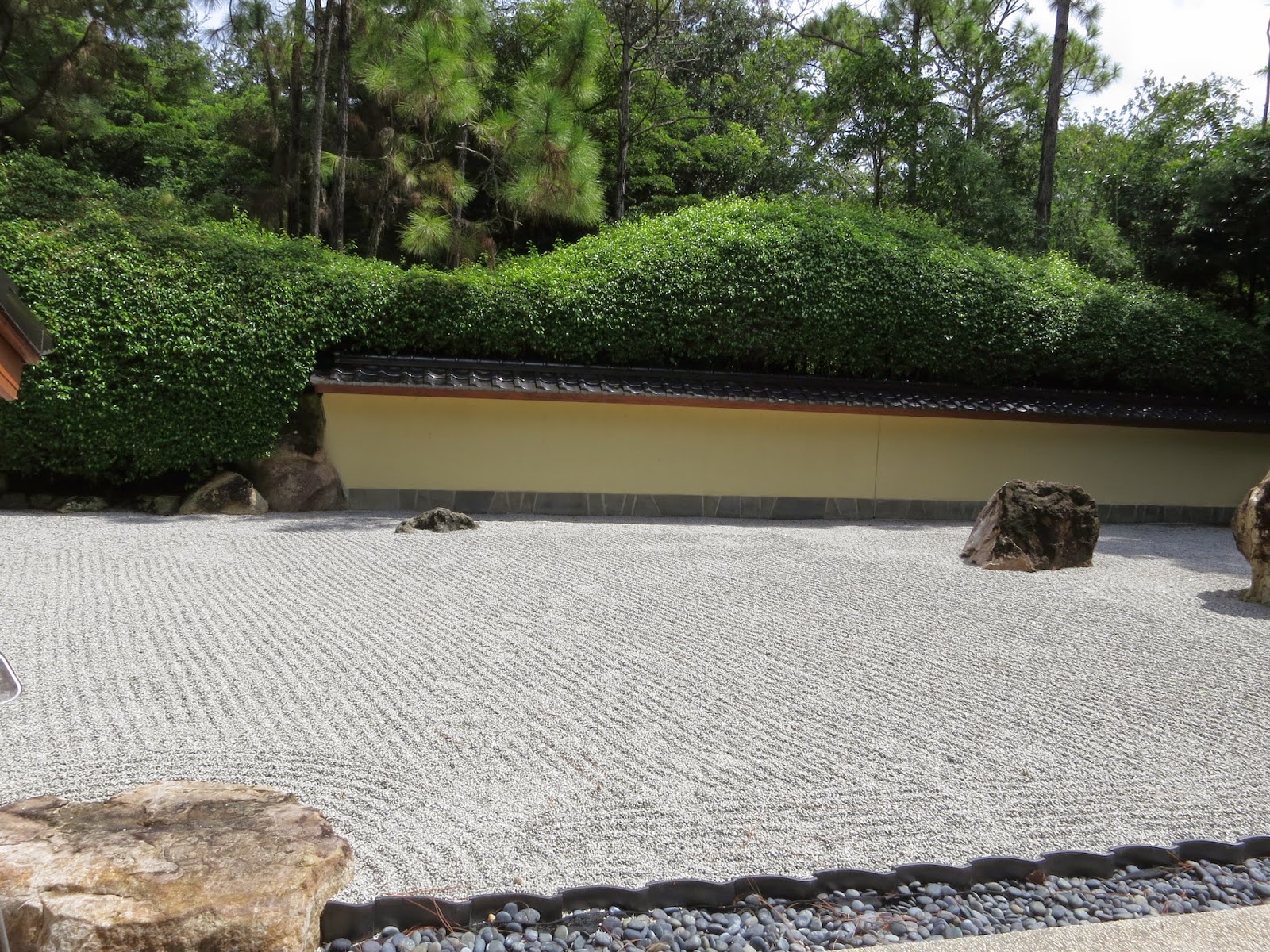 In East Asian lore, turtles are said to live 10,000 years. So what Japanese garden would be complete without a pond of koi fish and turtles living in perfect harmony? 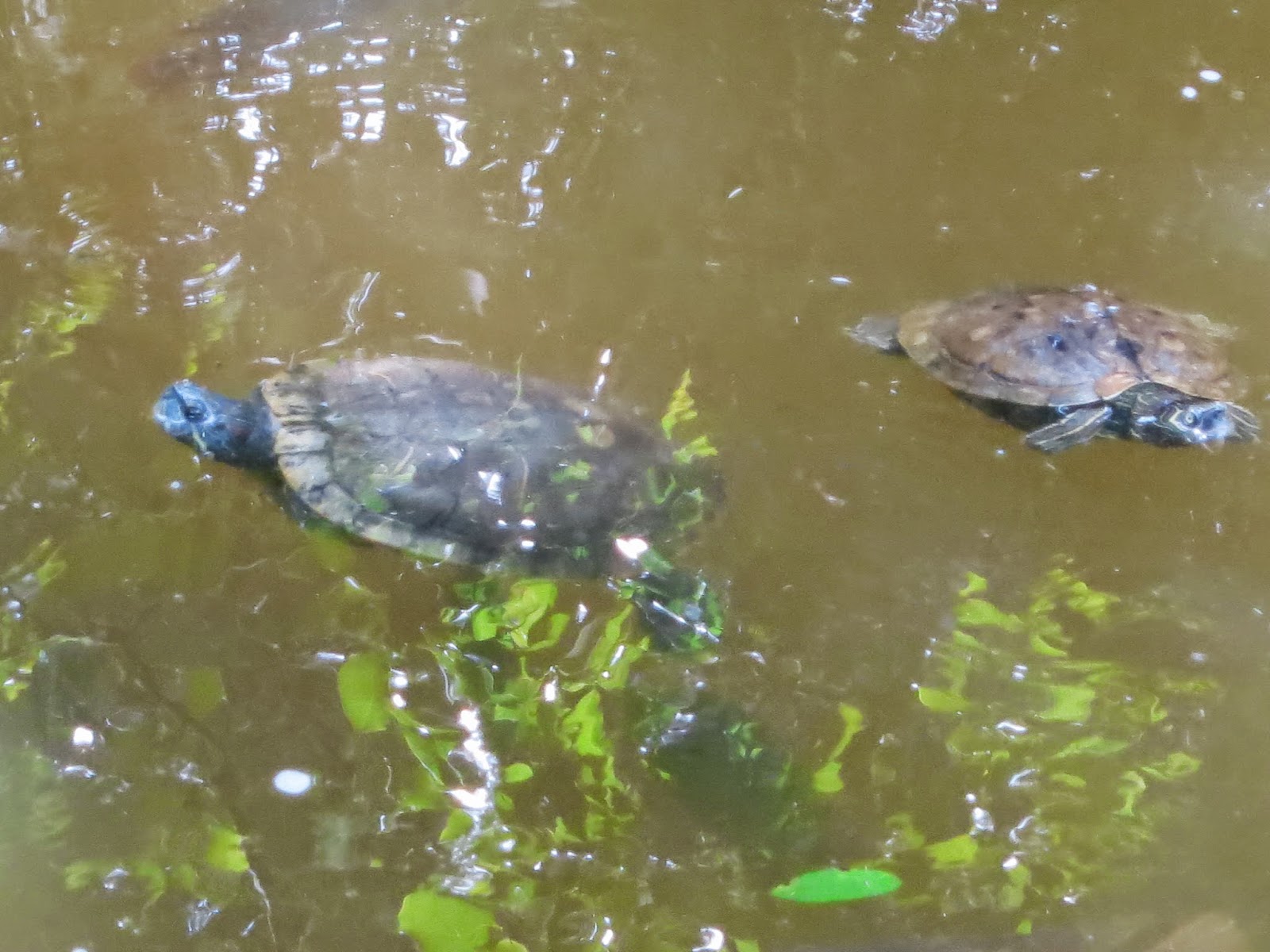 I hope you've enjoyed this very abbreviated tour of the Morikami Japanese Gardens! Tell me... do you have a favorite place to recommend?

Love your pics and descriptions. I used to live in Pasadena too, and the Huntington Gardens and Library were a favorite stay-cation spot!

They look lovely! As I sit here in a sweater and a blanket over my lap, I can enjoy the warmth and serenity vicariously. :)

Lovely photos. I feel like I've visited now, too! Like Samanthe Beck, I like the Huntington Gardens' Japanese (and Chinese) gardens. I guess you have to be very "up" on the difference to know when you've crossed from one to the other.

Very interesting stuff, Jenna. I've never been to a Japanese garden before. I especially liked the water fountain pest control - such a smart invention. Thanks for the tour!