Bound to Submit is Available Now!!

We have a few fund-raising haunted houses around here every year. I'm always too chicken to go to them. But I had fun shutting my two characters together where they had to start working out their problems.

Mason’s dark good looks and dominating personality stirred up Kelly’s forbidden fantasies, frightening her so much that she broke up with him. When she agrees to help out at the community haunted house, she never expects to be tied to a bed, playing damsel in distress to Mason’s masked, whip-wielding villain.

Mason knows Kelly is fighting her sexual needs and he hopes that a few hours of playing out her fantasies with him will prove it to her. Bound and under his control, she can’t run away from him this time.

Previously published as Nothing to Fear, but has been significantly revised and expanded. 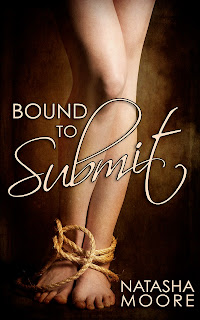 “What do you mean I’m going to be tied to a bed all night?” Kelly Long’s frantic words echoed in the sudden silence. Laughter burst out from the dozen or so friends and community members around her getting ready for the annual Halloween haunted house.

“Yeah, sorry. I know it will be kind of boring to just lie there.” Lisa grabbed her by the arm and led her through the large living room draped with cobwebs and spiders, bats and ghosts. “But hey, it’s got to be better than the pathetic way you’ve been spending your evenings lately.”

Her best friend knew her too well. Since her painful break-up with her last boyfriend, Kelly’s life had been reduced to lonely runs in the morning, a busy teaching schedule during the day and binge-watching old sit-coms at night. And doing a little bit of research she didn’t want anyone to know about.

Electric candles flickered from the corners of the room, giving it the perfect eerie atmosphere.

“Stop whining. It’s for a good cause.”

“I know that,” Kelly snapped, suddenly on edge. “The proceeds from the haunted house stock the food bank for months, but I thought I was going to be taking ticket money.”

“We added some more scary rooms to the house this year and had to shift around some volunteers.” Lisa, tall and thin in a black Elvira’s dress and teased black wig, nodded her head in the direction of the entryway of the old mansion where the ticket table was being set up. “Mabel Grimes volunteered to help. I couldn’t turn her away.” She lowered her voice to a whisper. “We need you in the damsel in distress room, Kels. Can you see Mabel struggling against her bonds and screaming for help in that gravelly, smoked-for-too-many-years voice of hers?”

Kelly didn’t answer her. Strange, forbidden tingles ran along her skin at the thought of her arms and legs being tied to bedposts, even in jest. She rubbed her wrist. She hadn’t felt this illicitly excited since she’d last seen…

No, she couldn’t think about Mason now. She’d never make it through this evening if she thought about his broad shoulders and shaved head. His deep, dark eyes staring down at her. His fingers wrapped around her wrists. His voice whispering those tempting words.

Oh, shit. She should have realized Mason would be around here somewhere. She whipped her head around but couldn’t pick him out among the ghosts and goblins and other masked creatures wandering about. He’d stand a head taller than most of the people here. Where was he?

As head of the Halloween fundraising committee, he was probably out coordinating all the different activities. The bonfire. The costume contest. The pumpkin carving and apple bobbing. And of course, the haunted house. She’d deal with it if she ran into him, but she wasn’t looking forward to the awkwardness that was sure to result.

She hadn’t seen him in weeks. Not since the night she broke things off with him. Kelly pushed away the memory of the stricken look on his face as she followed Lisa around the corner. It was probably better to be shut up in one of the rooms after all, rather than sit out here where everyone, especially Mason, would see her when they walked in the door. Maybe she could get through this evening without running into him at all.

Kelly’s heart pounded as Lisa led her up the long, steep staircase with its intricately carved spindles. The old Bartholomew mansion was the perfect venue for the haunted house, with its many rooms and dark, old-fashioned décor. There was a rumor that this house on the hill had been a bordello back in the old days.

“All you have to do is scream your head off whenever the door is opened,” Lisa was saying.

“We’ll be taking groups through the house one at a time. They’ll have to wait their turn in the spider web room. Cool, huh? Dark and spooky, ya know?” Lisa glanced at Kelly over her shoulder with a big grin.

“Getting them into the mood.” Kelly was already spooked.

“Anticipation can be pretty powerful, especially in the right atmosphere.”

Do you like to go to haunted houses? How about reading Halloween themed stories?