Her Royal Rendezvous and a Giveaway!!

Love is reunited lovers risking their hearts for a second chance.

Included in the Love Is...charity anthology, Her Royal Rendezvous, a short story that takes place in my Her Royal Romance world, is now available on its own for only 99 cents. I love this tale of two people taking a chance on love they thought they'd lost. 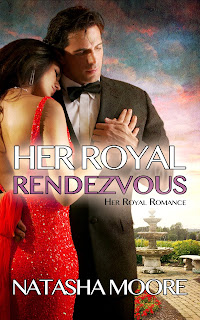 Two years ago, Liliana Gullotti broke off her engagement to Tony Barone, head of royal security, because his job took over his life and left no time for her. But when she sees him at the prince’s wedding reception, she knows she’s never gotten over him. And she agrees to meet him at their old rendezvous spot one last time.

Tony never stopped loving Lil, but has honored her request to stay away from her. But once she approaches him at her cousin’s wedding, all bets are off. He’ll do whatever he can to show the sexy physician she means the world to him. And that a single rendezvous will never be enough.

He froze as the rich, silky voice flowed over him. He swallowed and turned to face her for the first time in two years. “Lil.”

Liliana Gullotti looked even more beautiful than he remembered. Her wavy dark hair curled around her bare shoulders and he knew it would slip like silk through his fingers. Intelligent eyes studied him, probably wondering if he had changed since the last time they’d been together. Her sensuous lips were slicked with the same deep red as her dress. She must have been wearing extremely high heels because the top of her head actually reached his chin.

“Still working?” She stepped up beside him and nudged his arm gently with her shoulder. Her scent enveloped him, wound around his heart and squeezed. “What a surprise.”

“It’s my job,” he replied with a heavy sigh.

“I’m not here to pick a fight,” she said smoothly. “It would have been rude not to say hello.”

“One wouldn’t want to be rude,” he mumbled. He’d been around royalty long enough to recognize that regal tone they must be taught from the cradle.

“Don’t be that way. I didn’t mean that how it sounded.” She placed a hand lightly on his arm and it seared him through his tuxedo jacket. She looked up at him through long lashes framing dark chocolate eyes. “It’s good to see you, Tony.”

He didn’t want to fight with her either. “You’re looking good, Lil.”

“You too.” Her gaze swept him up and down. “But then you always looked as good in a tux as you did a pair of jeans.”

He chuckled. She’d always said she liked him best in a pair of jeans, which he rarely had the chance to wear. He breathed in Lil’s scent again, sharp and sexy, and his body reacted, hardening, aching. For her. Always for her.

“How are things at the hospital?” he asked, to keep her talking. Keep her beside him. “You like it there?”

She dropped her hand. “Yeah. It’s a lot busier, of course. Life flies by much faster in the ER than at the palace.”

All he knew was that he wanted to gather her into his arms and never let her go.

He must have been silent for too long. She cleared her throat and stepped away. “Well, it was good to see you, Tony.”

“The newlyweds are scheduled to leave in less than an hour and then I’m off duty,” he said, the words rushing out of his mouth.

“Meet me in the garden at midnight.” His voice sounded ragged even to his own ears.

He caught her hand when she turned to leave him. Again. “To talk. To catch up.”

His sudden sense of desperation was unexpected, but it gripped him by the throat. “I’ve missed you, Lil.”

She stiffened then. When she tugged her hand away, he let her fingers slip through his. “Good-bye, Antonio.” She cupped his face. Her lips brushed his cheek so lightly he might have imagined it. “Be happy.”

Tony stood there at the edge of the ballroom and watched the woman he loved walk away. With a clench in his chest, he realized he was tired of standing on the sidelines. Tired of merely watching. This time he wouldn’t let her go without a fight.

To celebrate the release of Her Royal Rendezvous, I'll be giving away one e-book of either one of the first two books in the series, Her Royal Masquerade or Her Royal Bodyguard, winner's choice. Just leave a comment along with your e-mail address if you'd like a chance to win.

Don't forget to leave a comment for a chance at the giveaway!

Natasha
The Cottage Next Door
Playing for Real
Her Royal Masquerade
Her Royal Bodyguard
www.natashamoore.com

By Natasha Moore at October 13, 2014
Email ThisBlogThis!Share to TwitterShare to FacebookShare to Pinterest
Labels: giveaway, Her Royal Bodyguard, Her Royal Masquerade, Her Royal Rendezvous, Her Royal Romance, new release

I loved the excerpt thank you. Something special about a Royal romance.