Now that hubby and I are no longer working day jobs, the idea of becoming snow birds during the long, cold winters of western NY has become a topic of conversation. Debate. Negotiation...

We have quite a few friends and family who travel south for the winter. We visited many of them this past winter. Almost all of them, in subtle or not-so-subtle ways, chatted up their particular areas and/or pointed out houses that were for sale in their areas. As tempting as it would be to own a house in Florida, realistically...we can't afford a second mortgage. But a new RV...a little bigger, with MUCH more storage??? That we could handle.

We bought a fifth-wheel trailer, with TONS more storage, and a vaulted ceiling that gives it a very open feel. Because it has slide-outs on both sides of the unit, we were afraid it wouldn't work with the deck we'd built at our camping space. But there's still plenty of room. 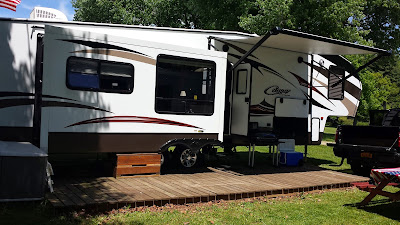 You can see the pendant lights over the kitchen island. The stairs in the back go up to the bathroom and bedroom. 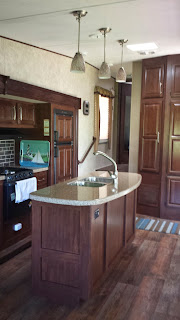 Pictures don't do it justice. The rear living area is very spacious, and aside from all the large windows, we have a flat screen TV and an electric fireplace. 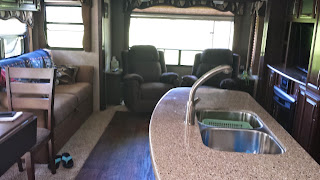 Yes. I think we will be very comfortable in this new home. 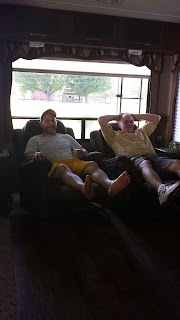 And the great thing about this winter home is that we can live it in during the other three seasons, and take it to visit other areas of the country. We plan on a trip to the Finger Lakes this summer and to the Outer Banks in the fall. And we're thinking about going out west sometime in the next couple years. I'm still waiting to see the Grand Canyon.

So all that's left now is deciding where we want to stay in Florida during our three months as snowbirds next winter. Or will it be two months? Or only six weeks? Um...hubby and I are still in negotiations over that part. I'll let you know once that's been decided.

By Natasha Moore at June 16, 2014
Email ThisBlogThis!Share to TwitterShare to FacebookShare to Pinterest
Labels: Her Royal Bodyguard, Her Royal Masquerade, Her Royal Romance, Natasha Moore, Playing for Real, The Cottage Next Door

Beautiful! Da Hubs and I have been shopping for a pull behind camper. Right now we tent camp.

It's gorgeous. So much room! I think you guys are going to love traveling in this.

That's awesome, Natasha!
What a surprise to see such luxe decor inside. You deserve the best, darlin'. Have a blast!

Mary Ellen, as soon as we walked in, the high ceiling sold us. It FEELS roomy and that makes all the difference!

Thanks, Ash! Can't wait to take the laptop out somewhere with an awesome view :)

Wow! Now that would get me camping!

LOL Dalton. Thanks for stopping by :)

Congratulations, Natasha! You have your own little world that you can move wherever the spirit takes you :)

Yeah, Leigh. It's nice to have your own bed and bathroom no matter where we go :)