Join me in welcoming Victoria Adams to Fierce Romance. She sharing a new release with us, A GUY AND A GIRL.

I'm Victoria Adams. I live in Ontario, Canada with my husband and pets. Daughter's grown up and is now teaching. I like to garden, cook and belly dance. In the summer, cars slow down when they pass my front yard and the passengers gaze at my flower beds. Friends love to be invited over for supper as the meal is going to be good, good for you and nowhere near low-calorie! No dieting allowed at dinner parties. As to belly dancing, find a class and try it. It's a blast!

I've been writing since I was little. Being an only child, long car rides were filled with making up stories in my head about the people I saw out the car window. When my daughter was younger, I made up stories that she suggested. I'd say – Once upon a time there was a…. She'd shout an answer – chicken! And the story went from there. Great creativity exercise as it turns out. Now, my writing style has taken a split to contemporary romance for adults and contemporary romance for new adults. 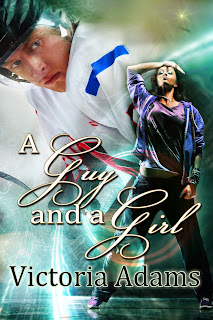 Tagline
Lies, deceits and secrets - not a good way to begin a relationship.

Blurb
After an ugly past forced Hunter Connolly to escape to Europe, the talented hockey player is back in North America and determined to land a position with a professional team. But he can’t hide from his past forever, especially when his beautiful classmate, Chelsea, forces him to reexamine his life. Soon, hockey is not his first priority anymore.

Chelsea Henderson is a bright co-ed working towards her dream of being a professional dancer. She forms a unique friendship with one of her father’s newest recruits and would love nothing more than to take it to the next level. However, there’s just one small problem. He doesn’t know she’s his coach’s daughter.

Amid the deceptions, danger lurks closer than they could ever imagine. Will fate contrive to rip the young lovers apart? Or will Hunter and Chelsea have their shot at love?

"Good, now that everyone is here, welcome. Today is a get-to-know-each-other day. I don't like impersonal classes where no one knows each other. I feel a class should be like a team. Since you'll be criticizing and analyzing each other's works, you should get to know one another. Let's go around the table, starting with you." He pointed at Chelsea who sat directly in front of him. "Name. Major."

Out of the side of his mouth, Hunter whispered, "Better you than me."

She glanced at him. "That was supportive."

"My name's Chelsea, and I'm taking this and a Composition and Repertory class."

"I speak for all of us when I say - a what?" Hunter looked at her sideways.

"Do you wish to be a dancer?" The professor folded his hands and placed them on the table. Chelsea blushed and nodded. He pointed to the person on Chelsea's right.

"My name is Steven Francis, and I'm pre-med."

Hunter listened as several other students listed themselves as pre-med, pre-law, business administration and economics. He shook his head. I'm so in the wrong place. But with Chelsea being here, this class could be liveable. At last it was his turn. "Hunter Taylor, and I don't have a declared major."

"I play hockey. I'm trying out for the Vipers."

The other five girls sat up taller, fixed their hair and smiled.

The classmate refused to make eye contact with Hunter.

"Everyone has dreams." Hunter jerked his thumb towards Chelsea. "Chelsea's and mine may not be academic ones, but they're just as hard to achieve as yours are. Don't put me down 'cause I want to be a hockey player. I may have to hire you to represent me when I negotiate my deal."

"An interesting mix of students." The professor scanned the group with eyes lit up with humour. "A dancer, a few lawyers, doctors, business people and a hockey player who can defend himself against a lawyer."

"I play offence. We're the aggressive ones."

A GUY AND A GIRL is available now!

Welcome to Fierce Romance! A Guy and a Girl sounds like a great story. :)