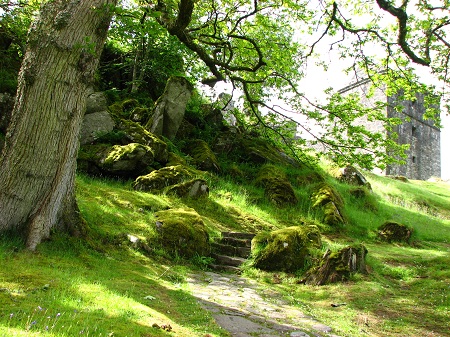 Today we continue our tour of Kilmartin Glen in Argyll, Scotland, with a visit to Carnasserie Castle. We walked across sheep pastures and up a hill to visit this castle, which is a couple of miles from Kilmartin Village. It is now owned and cared for by the National Trust for Scotland. Carnasserie Castle was built in 1565 by Bishop John Carswell who was the Rector of Kilmartin and Bishop of the Isles. He's best known for having published the first Gaelic translation of John Knox’s Liturgy. 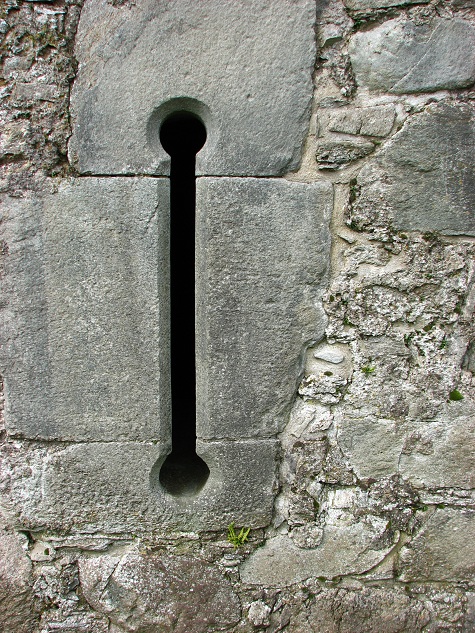 Despite some of the design features, such as these double keyhole gunloops, it's evident the castle was not designed for defense but mainly as a home. 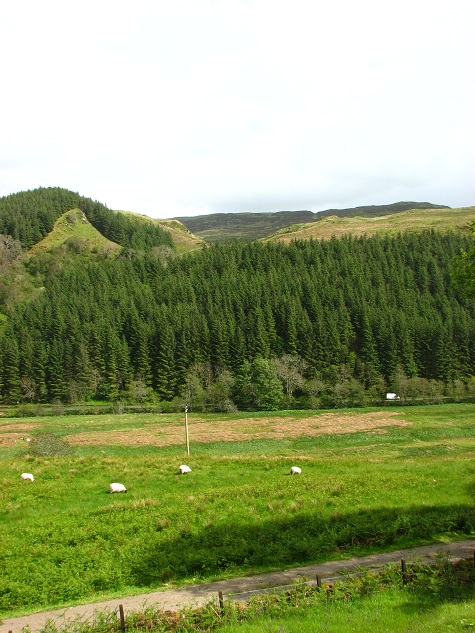 View from the castle grounds of grazing sheep, trees and mountains in the distance. 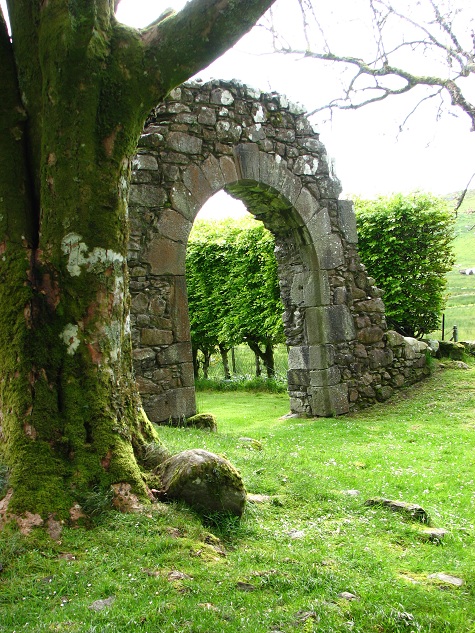 A walled courtyard garden. An inscription on the archway reads: "SDC LHL 1681, for Sir Duncan Campbell, 4th Baronet and Lady Henrietta Lindsay, whose support for Argyll's uprising led to the castle's destruction."
When Carswell died in 1572, the castle went to his patron, the Earl of Argyll. But Carswell’s son and grandson occupied the castle until 1643 when the 8th Earl of Argyll sold Carnasserie to Sir Dugald Campbell, 3rd Baronet of Auchinbreck. He had some changes and improvements made to the castle and gardens.

When the 9th Earl joined the failed Monmouth Rebellion against James VII in 1685, the castle was captured and destroyed by Royalist forces. 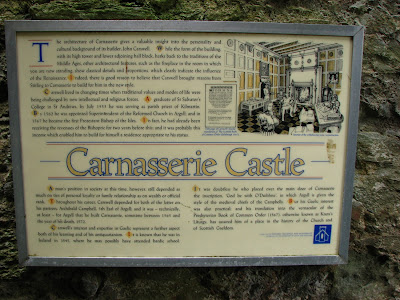 Click on the above picture to see a larger version. You can read about the design of the castle and Carswell. 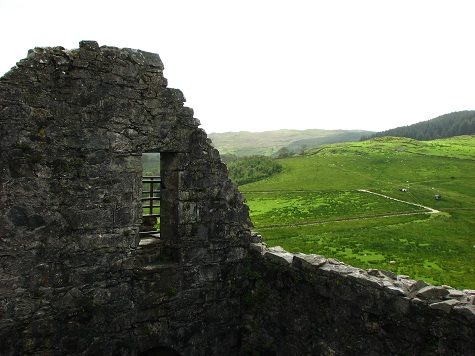 We climbed the five-storey towers to the parapet walk and took in the great views over the Glen. 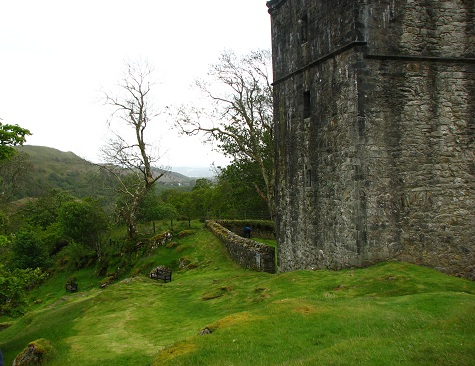 I hope you've enjoyed this little visit to Carnasserie Castle. If you have visited it, please let me know. What is your favorite Scottish castle?
Thanks!!
Vonda
www.vondasinclair.com

My favorite Scottish castle has to be Crichton, with its magnificent Italianate courtyard. Its condition is similar to Carnasserie. Your pictures are quite good.

Thanks, Angelyn! I haven't yet been to Crichton. I looked it up and it looks amazing. Would love to go there someday.

What a nice treat to spend time with you in Scotland this morning, Vonda. As usual, your gorgeous photos have stirred my lust for this country and my desire to return posthaste.

Just in case you don't remember my favorite castle ;) it is Eilean Donan.

Thanks, Paisley! I'm glad you enjoyed it. I do remember that you love Eilean Donan best of all. It's also one of my favorites. I hope you get to return soon!

I love the arch and the old stone wall. Thanks for posting this.

Lovely pictures!!! Thank you for sharing them with us =)

Thanks, Ella! I love that view also with the arched stone wall.

Natalie, thanks! I'm glad you liked them!

Thanks for posting more amazing pictures, Vonda. You know I love old castle ruins and it's in just a beautiful place. A real treat! :-)

Gorgeous photos. I've never been to Scotland, so I'm reluctant to pick a favorite until I've seen them in person.

Thanks, Vanessa! Yes, you would love this one. It has a wonderful atmosphere which I found very inspiring.

Ally, thanks! I hope you get to visit Scotland soon.

Thank you for sharing your lovely photos. Almost as good as going there.
Best
Cathleen Ross

Love your photos, Vonda. For sentimental reasons, my favorite castle is Eilean Donan castle on the Isle of Skye.

Thanks, Cathleen! I'm glad you enjoyed it!

Maureen, thanks! I love Eilean Donan also! It's the one I would consider the most beautiful, especially combined with its setting.

Very beautiful. Thanks for the virtual visit.

Thanks for checking it out, Brenda! :)

Thank you so much for sharing. These are just stunning pictures!!

Sounds wonderful, Deborah! I haven't been to Stirling Castle. I'd LOVE to visit it.