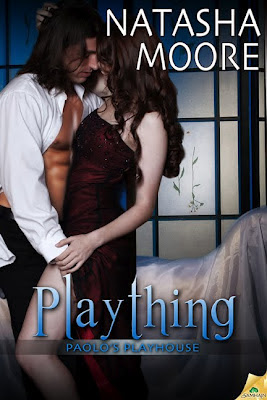 When I first sold my Paolo's Playhouse series and the four stories were scheduled out over a year, the release of the last story, Plaything, seemed so far away. I've celebrated the release of each story in the series, drooled over the great covers, enjoyed the reviews and reader's reactions. Suddenly...here we are, at the end of the road. At least for these four short stories that make up the Paolo's Playhouse series.

Paolo’s Playhouse. A new playground for consenting adults. Playrooms for every interest or desire. Bring your own plaything or we can provide one for you. We’ll help your fantasies come to life. Inquiries, phone…

The newspaper in Julianne’s hands rattled and she dropped it to the table as if it had burned her trembling fingers. The discreet ad at the bottom of the page grabbed her attention and wouldn’t let her go. Her heart raced and her nipples prickled. Words seemed to flash before her eyes.

She flipped the paper over and pushed away from the table. The marinated chicken breast and tossed salad sat, uneaten, in front of her. She didn’t feel like dinner any longer, didn’t even want the Chardonnay she’d poured to try to relax. The jumbled nerves in her stomach left no room for food. But the words kept running through her mind.

Julianne paced her apartment, restlessness buzzing through her system like an itch she couldn’t scratch. What was wrong with her? She didn’t have time to think about her sexual fantasies now. She had work to do. Work was what kept her sane. Work. Not fantasies.

She took refuge in the spare bedroom she’d converted into her workshop. Usually she felt happy there, but tonight the room seemed smaller, darker. The air was stale and stagnant. Still, she flipped through sample after sample, searching for the perfect drapery fabric for her current project. Nothing seemed right tonight. Everything felt flat, boring. But she couldn’t admit that work wasn’t enough anymore.

What would she have then?

She finally found a beautiful gold-and-green brocade that would be ideal for the draperies in the Olsons’ new dining room. And she had the perfect drapery ties to go with it. She’d gotten them on sale months ago, waiting for the right project. She opened the cabinet drawer and pulled out a length of braided cord.
Her breath caught as she ran the silky gold cord through her fingers. Slowly, without even realizing it, she wrapped it around her wrist, once, twice, and pulled tight. She stared at the dark gold cord wrapped around her pale skin as if wondering where it had come from. She tugged it again. Illicit thrills shivered over her skin, prickling her nipples and sending her sex throbbing.

Bondage. She could admit to herself that being tied up during sex had always been her secret fantasy, but could she admit it to someone else? She’d tried once, with a guy she thought she could trust. She’d gathered up all her nerve and timidly asked him to tie her wrists to the headboard before they had sex. Bill had recoiled in shock, horrified that she would think he’d ever want to abuse a woman in that way. He’d stared at her as if there were something wrong with her and had refused to listen as she’d tried to explain about fantasies and consensual kink.
She’d never mentioned it again to another soul.

In fact, she’d buried it so deep she’d thought it had been forgotten, but the emotional scars from that disaster had probably colored every lousy relationship she’d had since then. She’d never again dared ask for what she wanted in the bedroom. Never dared believe she could actually experience real bondage, even once. She’d resigned herself to a boring sex life and inventive fantasies of her own making.

Somehow Julianne found herself back at the kitchen table, the cord still wrapped tightly around her wrist. She flipped the paper back over and read the words again. Could this be her chance to live out her fantasy? She grabbed the glass of wine still sitting on the table and drank in down in several long gulps. Then before she could think twice, she snatched up her phone and punched in the number.

“This is Paolo’s Playhouse. How may I help you?”

Another excerpt can be found on the Samhain website.

And I've just started writing a bigger story with Paolo and Julianne so I hope you'll be seeing that book on down the road.

Plaything is available for pre-order now and will release tomorrow! I'm so excited to have Paolo's story released, the one that gave me the idea for the entire series. Have a great week!