Here are more sites on our tour of Kilmartin Glen, Argyll, Scotland. For the past two Tuesdays, I've shown other sites here, including Nether Largie South Cairn and Standing Stones and Carnasserie Castle.

Kilmartin Glen is chock-full of ancient historical sites and monuments, one of the richest areas in Scotland. It contains standing stone circles, rock carvings, henges, burial cairns and the ancient seat of the Dalriada Kings, the first kings of Scotland. And it is believed this was one of the busiest and most inhabited places during Neolithic times, 2000 – 3000 BC and earlier.


Temple Wood consists of two beautiful small stone circles, among the oldest in Britain. This is the circle of thirteen standing stones, the southern circle. It may have contained twenty-two stones at one time. In the center, you will see a burial cist. This is the younger of the two circles, and is believed to have been constructed around 3000 BC based on the burials and pottery excavated. 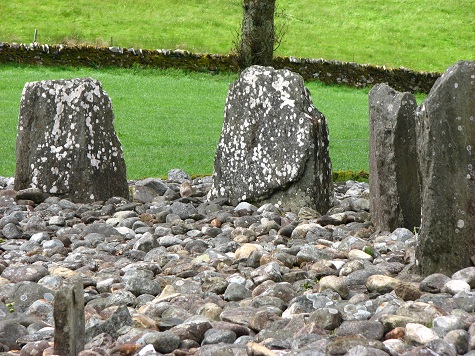 I didn't get a picture of the northern circle, but it is smaller and dates from about 3500 BC. It was in use for at least 2000 years. It was discovered that the builders had placed six wooden posts here so it could have been a timber circle. The radiocarbon date from charcoal on the site was 3075 BC +- 190.

Round river rocks fill both. It is said these circles have an Irish flavor. Experts believe one of the circles aligns with the mid-day sun on the winter solstice. The name Temple Wood was given to the site in the 1800s, when the trees were planted around it. This site is just south of Nether Largie South Cairn which I showed a photo of in my post two weeks ago. 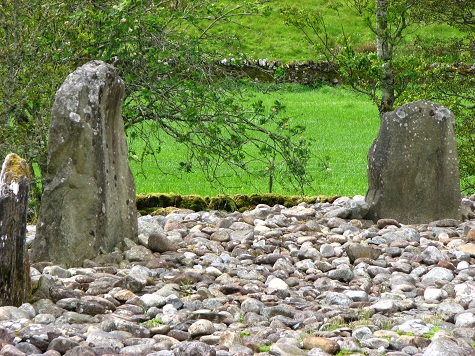 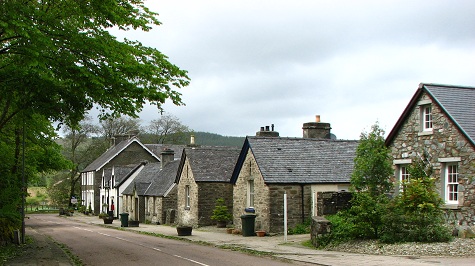 Occupying the center of Kilmartin Glen, Kilmartin Village is only five miles north of the ancient fortress of Dunadd, the capital of the Scots Kingdom of Dalriada prior to the year 850. Dalriada covered most of what is modern day Argyll and even extended to the north-east corner of Ulster in Ireland.

Kilmartin Village is what most Scots would call a wee village. It is beautiful and peaceful, not many people about when we were there. It is situated 30 miles south of Oban. 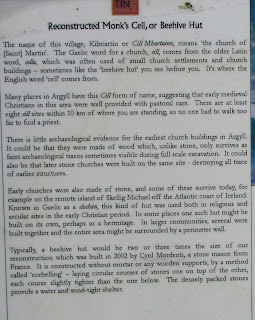 Click on the photo above of a plaque on site to enlarge it and read about the Monk's Cell. This sits just in front of the museum and cafe. 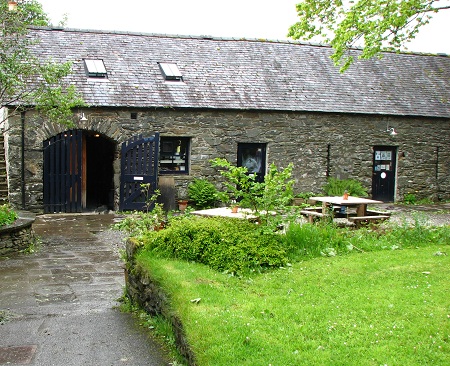 We visited the Kilmartin House Museum which is in the old Manse. We ate in the café (above), probably the only time I’ve ever eaten parsnip soup. And I loved it! The cafe is said to be a refurbished old barn. This building also contains a shop with a large selection of books about Scotland and the local area. 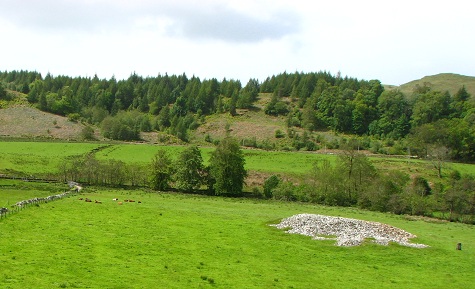 Glebe Cairn is on the valley floor below Kilmartin Church and Kilmartin House Museum. I took this photo as we exited out the back side of the building. The cairn is the northernmost of the five cairns of the linear cemetery. It is 30 meters in diameter and 3 meters high. It was excavated in 1864 and two concentric circles of boulders and two cists were discovered. One cist contained a food vessel and jet necklace. The other contained a food vessel only. Both vessels are on display in the Kilmartain House Museum. A cist is a prehistoric tomb made of stone slabs or hollowed out rock or a box or chest containing sacred utensils. Later cultures would see these cairns as fairy-mounds or sidhe-mounds, houses of those from other-world.


I hope you enjoyed these views. Next time I'll share information about about Kilmartin Church and its medieval grave slabs.
Thanks!
Vonda
www.vondasinclair.com

I didn't know what a cist was until this post. The cairns are fascinating. They reminded me of another term I recently learned--the cliet, a structure where Lady Grange was imprisoned in the Highlands by her estranged husband in the eighteenth century.

Amazing photos, Vonda. If you ever get tired of writing (and I hope that is never) you could go into photography. Talk about having history all around you....

How beautiful your pictures are. I read the plaque and found the info quite interesting. You're gonna make me get on that plane yet, Vonda

Angelyn, I'll have to check out and see what a cliet looks like. I do love looking at the cairns.

Paisley, thanks! I would love to be a real actual photographer but not sure I have the patience for it. LOL You're right about the history!

Cora,
Thanks! I'm glad you liked the info. I learned something that day too because I'd never seen a monk's cell. I hope you do decide to get on the plane and visit Scotland. :)

Thanks for more great pictures, Vonda. And the history lessons. I'd know almost nothing about Scotland otherwise. :-) Love those cottages and moss-covered stones.

Thanks, Vanessa! I'm glad you liked the pics and info! :)

I loves these photos, Vonda!

Thanks so much, Gerri! I'm glad you like them!

I just stumbled on these pictures. Wow! Thanks so much for sharing. Love them.

Thanks for checking them out, Anita! I'm glad you enjoyed them!