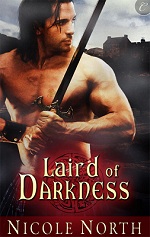 Thanks!
Nicole
Visit my website
By Nicole North at May 10, 2011
Email ThisBlogThis!Share to TwitterShare to FacebookShare to Pinterest
Labels: fairy tales, Laird of Darkness, Nicole North, paranormal

Great excerpt, Nicole. When I was a teenager--yes, a long time ago--I used to dream I could fly. But then again, I have a vivid imagination. :)

Nicole, I always love reading your stories and I can read them again and again!

I would love to have Duncan's power or even better the power to heal hurt, banish hatred and instill goodness.

I loved reading this story. Like I've told you before, it is the very first story I bought for my new Kindle, the first story I read and I know I will read again. It gave me tingles to read.

You are so good at giving us heroic Scots to fall in love with.

Congrats on your successes!!

Thanks Dawn!! Flying would be an amazing power to have!

Lizzie, thanks!! I'm thrilled you like my stories! I agree, a healing power would be wonderful to have.

Paisley, thanks!! I still consider it a huge honor that you read my story first! I'm so glad you like my heroic Scots. :)

Great excerpt, Nicole. The only trouble with superpowers is that they usually come with a downside and lots of responsibility!

OH! I wish I had Duncan's powers. What mischief I could stir! I've got to hurry and read this book. I love your way with words, Nicole. Well done!