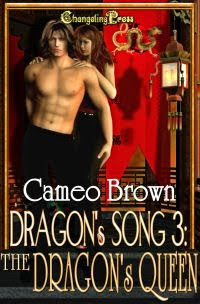 The hardest part of this week’s blog post is choosing which characters to write about. I never realized that so many of my characters had special abilities until this topic came up and I had to think about it. I tend to write in the fantasy area, so it seems kind of normal for my characters, both men and women (and demons and shifters and vampires, etc.), to be a little abnormal.

My favorite characters with special abilities have to be my dragon shifters. How cool would it be to be able to simply choose to be a dragon one minute and then human the next? My Dragon's Song series is based on a secret about the human/dragon relationship that the dragons know but humans forgot. But wait until those humans remember…oh yeah! Here’s an excerpt from The Dragon's Queen so you can see what I mean.
Emerson was gone.

He considered she’d abandoned him and run to the blue officials, but the idea of it constricted his chest and brought an ache he didn’t care to suffer. He used his legs to push himself up the wall and stumbled to the corner of the passageway. He heard noises, like those in a great battle. One of the loudest sounded familiar. With great care, he leaned around the corner and peeked at the front of the Chinese food-serving place. He didn’t believe the sight greeting him.

A dragon, its glorious scales sporting a flowered print extending from the top of its snout to the tip of its tail, stood tall and majestic as it beat the whey out of the blue officials rushing it with a matching glossy bag. The dragon bellowed, whapping any human within striking distance, but in a very feminine, elegant way. One man she knocked to the ground and continued to pound him until he stopped moving, then she turned on the others.
The Dragon Kind have never forgotten the secret, and they are sworn to protect it. Some of them don't appreciate humans who do not respect the Dragon Kind or their code of honor. In this except from Nioral's Quest, Nioral proves just that. 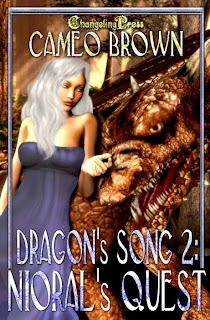 Nioral woke with a jolt and a snort. The noise in his dreams now interrupted his waking as well. Someone yelling, human words as much as he could make out, shook the leaves above him. One drifted down, floating past his snout, and he watched it mix with the underbrush on the forest floor, which, to his surprise, moved. Nioral blinked, unsure if his drowsiness caused an illusion or if the floor of the forest had just come alive. Fascinating.

“Get it! Those eyes alone will make us rich!”

“The silver skin will make us kings!”
Yes, Nioral thought, definitely humans. From the spiritual etchings in the vocal emanations and their harsh words, he determined they were greedy young ones at that. Nioral harrumphed. He wondered if they realized waking a sleeping dragon couldn’t possibly be in their best interests. He doubted it. They would soon figure it out, though, when they crashed through the trees into the clearing in just about ten seconds. Nioral rose up and shook himself out to his full dragon glory. He didn’t particularly like terrorizing humans, but in this case, it needed to be done. He counted silently in his head: 7, 6, 5…
“Please help me,” came a small whimper, seemingly from nowhere.
Nioral started. His countdown interrupted, he searched the area for source of the feeble plea. The leaf litter at his feet moved slightly, just where he thought he’d seen movement moments before. As he watched, the shiny silver head of an adder appeared, the little bit of sunlight streaming through the forest glimmering off its scaly skin with blinding intensity. Even more unusual were its eyes, the consistency and shape of the finest sapphire gemstones.
Nioral peered into the deep blue stones, and a strange sensation immediately raged through his groin. Stunned, he stumbled back, recoiling at the unfamiliar—dare he call it?—urge.
The snake gasped now. “I-I won’t hurt you Sir Dragon. I just need…need,” it choked on the last couple of words, “…your help.”
Nioral snorted and shook his head. Afraid of an adder? A dragon? Of course not. Adder venom had no effect on dragons, although, if properly mixed, it made fine elixir for tail scrunge. All adders knew this; how could this one not?
He sensed something else: fear. Adders rarely feared anything, but in this one the emotion was strong. Too strong. Nioral’s chest ached in response to it.
“To the gods! Look, Barek, it’s a dragon. We got us a fine catch today,” the voice of one of the greedy lads pulled Nioral’s attention from the odd creature. A pair of idiots stood in front of him.
Obviously lower than peasant folk, the grungy boys appeared to be on the verge of manhood, though Nioral doubted they’d make it much past their teen years if they were so stupid they thought they could take a dragon down. He laughed, shooting a stream of orange flame in their direction.
Both boys stopped abruptly, shaking. However, Nioral’s warning didn’t deter them long. The taller of the two carried a large stick, and now he waved it in Nioral’s face. Nioral tried not to laugh, for as much as a dragon could laugh.
“Be off with you, dragon. We’ll settle for the snake,” he said, the tremor in his voice belying his true level of courage.
Nioral leaned down, tilting his head as he did so. For some reason, this always seemed to mesmerize humans, although he didn’t know why. Entranced, the boys watched him take the stick in his mouth and crack it in two, pulverizing the bits until the dust dripped out of his jaws.
He lifted his front leg and flicked the smaller boy in the forehead with his talon. The action sent him flying a good twenty feet back, the shock of being assaulted by a dragon evident in his wide-eyed expression. The lad’s braver comrade threw himself at Nioral, flailing at him with both arms and legs. Nioral turned just slightly and sent this one sprawling with his tail. Having had enough nonsense, he lifted his snout and shot a burst of fire into the air, sending both lads scrambling in the direction from whence they came.
Nioral coughed and used a talon to pick a piece of wood from his teeth.
Humans, indeed. 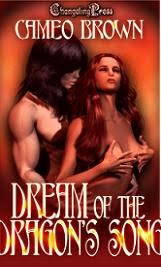 See what I mean? To have the ability to switch between a human and dragon form, and to be able to kick ass in either one? Truly a special ability I’d like to have! I guess that's why I enjoy writing about them so much. :)

If you’d like to live vicariously through my dragon shifters from the comfort and safety of your own reading nook, check out the Dragon’s Song series. It starts with Dream of the Dragon’s Song and continues with Nioral's Quest and The Dragon's Queen.

By Cameo Brown at May 11, 2011
Email ThisBlogThis!Share to TwitterShare to FacebookShare to Pinterest
Labels: Cameo Brown, dragons, shape shifters