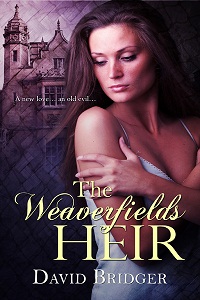 Today we're happy to have David Bridger as our guest here at FR and he's giving away an e-copy of his new book to one commenter!


David Bridger settled with his family and their two monstrous hounds in England's West Country after twenty years of ocean-based fun, during which he worked at various times as a lifeguard, a sailor, an intelligence gatherer and an investigator. He writes paranormal and urban fantasy.
Welcome, David! Please tell us about your latest release.
The Weaverfields Heir is a paranormal fantasy, a big supernatural saga that follows several generations of a strangely gifted family and zooms in on the lives of a few particularly creative individuals. Here's the blurb:
When Kate Richards inherits a dilapidated English estate from her estranged grandfather, she finds herself thrust into a world full of hostile new family members, mysterious Romany tenants, and strange visions of "the net" - an invisible web that connects everything in the universe. Kate thinks she's losing her sanity, but the odd family stories and disturbing tales of locals convince her that something sinister is going on at Weaverfields, while the inescapable pull of the net draws her deeper into the secrets of her new home.

That led straight into my main character, Kate, who inherits both a dilapidated country estate and the ability to see the net from the grandfather she never knew. She uses the net to research the lives of her ancestors and learns how to manipulate this phenomenon.

Next came the land, which I drew directly from my childhood memories. One arm of my family owned a small area of land in a steep river valley in . I spent weekends and school holidays there for several years, running wild with my cousins and “helping” my builder grandfather convert three derelict miners’ cottages into a family home. I loved that place, and it still holds a fond place in my heart, even though it changed hands out of the family some time ago, so it was easy for my imagination to extend the land and replace the house my grandfather built with a stone mansion built by Kate’s Victorian industrialist ancestor.

The final seed was the theme, which is about people in successive generations of a family making the same old mistakes their predecessors made and being bound by the same old ties, until someone comes along who is talented and brave enough to break the pattern and free everyone.
I love learning how authors put a few ideas together and create a story. Why did you choose your setting and why was it perfect for your book?
The family's home is Weaverfields, near the fictional market town of Walyer in , but significant parts of the story take place elsewhere. There are two parts of England that I'm particularly familiar with: the north western city of Liverpool and nearby town of Wallasey across the River Mersey, where I was born and raised, and Plymouth and Dartmoor in the south west, where I settled when I came home from the sea. Both of these places were bombed heavily during the Blitz in the Second World War and the resilience of local people was inspiring. I definitely wanted that in the book. Also, the Weaver family are a dynasty of builders. So I had them involved in the development of those two cities in Victorian times, then involved again in the rebuilding process after the war.
Which of your characters is most like you? Least like you? And why?
Ah. Least like me is Nicholas Weaver, Kate's Victorian industrialist ancestor who ruins people for his own profit. He's a monster of a man. Most like me is Joe, I suppose. Kate's love interest. He's a travelling street artist, a free spirit and a bit of a hippy. J
Where is your favorite place in the world?
You know, I often pondered this question during my years of sailing the world, and there's absolutely no doubt in my mind about the answer. It's wherever I can be with my loved ones.
Please tell us about your favorite character in The Weaverfields Heir.
Kate. There are five point-of-view characters who live in various periods, but present day Kate is the one who pulls all their stories together and forms them into a coherent picture. Also, her personal journey is the most dramatic, taking place as it does over the course of a single summer.
Please tell us about your other books.
My debut publication was paranormal romance Beauty and the Bastard, from Liquid Silver Books last year. Coming up on the 27th June 2011 from Carina Press is urban fantasy Quarter Square, which is Book 1 of my Wild Times series. I'm writing Book 2 now.
When did you know you wanted to be an author?
Mr Watson, my brilliant English teacher, inspired me to dream of it when I was thirteen years old. I told the story in my first ever paid article here.
What is your writing process or method?
I learned the method that works best for me is to write a fine first draft. No hurrying. No race. No shorthand sections or "leave that bit for later" gaps. I simply do a thorough outline then write it as near perfect as I can. Doing it this way I find what used to be a big second and third draft plus a heavy-duty editing phase are now enjoyable tightening, strengthening and polishing sessions, and even though I take my time on the first draft the final ms is ready to submit in a shorter time than doing it my old ways.
Would you like to ask readers a question?
If you had the ability to use the net to change things, what would you do with it?
One lucky commenter will win a copy of David's new book, The Weaverfields Heir!


Thanks so much for being our guest today, David! Everyone, please visit David online:
website & blog http://www.davidbridger.com
twitter http://twitter.com/#!/DavidBridger
The Weaverfields Heir is available at Etopia Press.
By Nicole North at May 05, 2011
Email ThisBlogThis!Share to TwitterShare to FacebookShare to Pinterest
Labels: David Bridger, The Weaverfields Heir

Hi, everyone, and thanks for inviting me here today Nicole . :)

Great guest blog! I loved David's Beauty and the Bastard and can't wait to read Weaverfields. He's a talented writer.

Thank you, Steve! I'm honoured to hear you say that!

I'm reading this book right now and it's wonderful! And I loved Beauty & the Bastard as well! :)

Thanks, Carolyn! I'm glad you're enjoying it. :)

Like you David, I was blessed with some great teachers growing up. A good teacher can make all the difference in a child's appreciation for literature, that and access to a library full of books. I love your description of the landscape that inspires you and look forward to reading your book.

I love the sound of your book, David and look forward to reading it. Your net is a fascinating concept. It's hard to know what I'd change since each change would likely have repercussions that we might not even be aware of now. Maybe stopping one of the world wars before they started?

Thanks, David, and welcome to FR! We're glad you're here with us today!

Hi, Janne, and thank you!

Thanks, Shelley. I'm glad you like the concept. And you've hit on exactly the thing I kept thinking about while I wrote this book, all about seeing patterns and achieving a balance. :)

Great interview, David! :) Kate definitely sounds like a heroine I'd root for all the way.

Beauty and the Bastard is TBR list. Can't wait to get to it!

Just on the title alone, I want to read Beauty and the Bastard :)

This sounds terrific though, loved the description and excerpt. Can't wait. It sounds like you would be well inspired by where you live, I envy you that.

Thank you, Clancy! I hope you enjoy it!

Yes, our valley is a lovely place to live. It surprises me afresh all the time.

Love the excerpt, David -- no surprise there! I love your writing.

What I would change? Hmmm. Could I make all the editors where I have subs right now accept them? Maybe with large advance? ;-) I know, such a selfish thought! On the other hand, I'm afraid to tamper with other people's lives outside of fiction.

This book is my introduction to David's writing. I am enjoying it immensely.

Thank you, Erin! I'll have a word with Kate and see what we can do about some big advances for you! :)

Thank you, Amber! I'm glad you're enjoying it.

I'm a big fan of the west country myself :) The book sounds fabulous!

And the west country is pretty damn impressed with you, Kate! :) Thank you!

Great glimpse of your writing. I can't quite square the hippy with the Navy, lol. I guess you're a Renaissance man.

Thanks, Carly. :) I never lost my inner hippy. He just smiled and enjoyed the journey.

I'd use the net to slowly repair the damage humanity's rush to progress has brought about. Maybe if we'd been a little slower and more careful, we could have achieved the same but with fewer consequences.

And like others, I loved Beauty and the Bastard. Can't wait to read Weaverfields.

You and I are on the same wavelength, Margaret. And thank you! :)

The Weaverfields Heir sounds like a great read. I'll have to check it out. I'm also very interested in your method of writing a thoughtful and slow first draft as opposed to the fast and furious method so many writers promote.

I tried fast drafting for two or three years before surrendering to what comes most naturally to me.

Kate Pearce is the winner of David's book! Congratulations, Kate!