Hottie or Naughty
Not all heroes need to be chest thumping alphas. If all males were created equal then they’d be boring. Sometimes a woman needs to root for the underdog. The pansies of the paranormal to get the girl, fight the bad guy, and keep his heartburn under control.
My series, The Vanguards, explores the different types of omegas in wolf shifter society.  Geeks of the underworld unity! They’re pushed to be more and do their best to save the day.  In my new release, Robert is the antisocial computer nerd. His best friend is the pack’s alpha, who sees the potential in this smart and serious omega. He sets Robert as his beta, second in command, and leaves him charge of the pack for a few days. 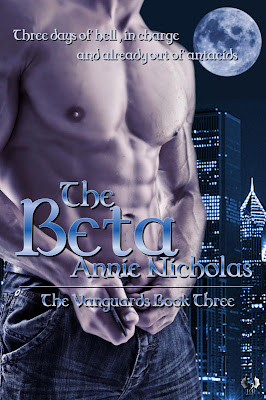 THE BETA
Three days of hell, in charge, and running out of antacids.
As the pack’s Beta, Robert needs to watch over the Vasi werewolf pack for a few days. He hates the responsibility, but his job is to dissolve any problems while his alpha honeymoons. Nevertheless, trouble comes to town and her name is Esther. She's beguiling, beautiful and picks his pocket. Although Robert doesn’t trust her, he still wants to possess her.
Esther arrived in Chicago with the intention of slaying a vampire named Daedalus. While trailing her quarry, she encounters Robert who unhinges her world. He doesn’t know her trade, and she doesn’t know his connection to the vampire. Disturbed by her attraction to this unusual werewolf, she can’t decide which prey to hunt. The one who’s stolen her heart or the one who’ll fill her bank account.
Hot graphic werewolf sex, growing body parts, and one pissed off Nosferatu.
Excerpt:
“We pulled Talon off the kid before he hurt him, but the dude’s out of control. He said something about us betraying him, that he didn’t recognize your unauthorized challenge last night.” Simon chuckled. “Said you beat him.”
“Well, it wasn’t an unauthorized challenge. It was a warning, which is why he’s still breathing. I’m starting to regret that part.”
The smile on Simon’s face transformed to surprise. “You beat him by yourself?”
Nice, even his pack thought him a trophy beta. Robert nodded, not trusting his mouth to be diplomatic.
Excited glances and pointing passed through the gathering as the news spread.
“Do you know where Talon’s headed?” Robert needed to get his claws on that beast and shake some sense into him. Even if he lost a challenge to that idiot, Eric would never accept Talon as beta. Maybe the dude had a death wish? If he kept acting like this it would leave Robert no choice. God, he’d never killed anyone before and didn’t want to ever start.
“He didn’t say, but he likes to hang out at a biker’s bar over by the Ukrainian village. The Twisted Tire or something? It’s off I-Ninety.” Two other males gathered by Simon. “Do you want us to come with you?”
Robert could hear both Daedalus and Eric in his head encouraging him to say yes. It would be a good bonding experience for him and the pack. A social event for males, get to know your beta night and watch him kick ass. “Not yet. I need to track him first, and I’ll move faster on my own.” For social animals, he and his beast didn’t fit in. They preferred solitude, and that’s why they’d become omega in the first place.
The Vasi had their share of omegas, just like any other pack, but they were nurtured instead of abused. Like little Aaron sitting at the table nursing his beer. The pack didn’t cast him out when Talon jumped him, they rallied around him. Robert really admired Eric’s work with the Vasi and hoped other packs would follow his example.
When Simon and his companions appeared disappointed at his refusal, Robert sighed and dug deep. “If I need back-up, you’ll be the first I call.”
They grinned and nodded.
He turned to leave and faced a wall of humans. Pushing through that mass of flesh flared his proximity alarms, and his beast strained at the yoke to thrash at the people who dared come too close. An exit sign glowed above the crowd, and he released the breath he’d been holding. Skirting along the wall, he shoved the door open when he reached it.
It brought him out to a narrow alley on the side of the building. The cool air was a relief, then he caught a whiff of a familiar scent. Something sharp and clean he’d recently had his face buried in.
Esther.
The door closed behind him with a thunk and took what little light it gave. She stood with her legs apart in the center of the alley, silhouetted by the distant street lights.
“Are you following me, Esther?” The muscles in his back tensed as he smelled gun powder. She held a gun again. Damn it. He glanced over his shoulder for cover if she got trigger happy.
“I’m trying to figure out what kind of sick game you’re playing, Rob.” She stepped closer, and he could see the outline of her weapon pointed at his head. “I hate being played for a fool, but you did a great job making me feel like one.”
Buy Link: www.lyricalpress.com/the_beta
Annie Nicholas
www.annienicholas.com
www.annienicholas.blogspot.com
By Kristin Daniels at May 27, 2011
Email ThisBlogThis!Share to TwitterShare to FacebookShare to Pinterest
Labels: Annie Nicholas, Guest Blog

Thanks for hosting me today, Kristin!

You're very welcome, Annie! Good luck with the new release!

I can attest that this is a great book, and a great series. I'm already (impatiently) waiting for the next book. Write faster! LOL

Woops, I hit 'post' before logging in my info. Apparently I need to go back to bed and get some more sleep