Ardvreck Castle is a ruin which sits on a promontory in Loch Assynt, Sutherland, Scotland. This is one of the most hauntingly beautiful areas of Scotland.

A sign at Ardvreck Castle reads: "Built by Angus Mor III in the latter half of the 15th century, Ardvreck Castle began as a simple rectangular block, three or four storeys in height. Almost a century later, Donald Ban IX enhanced the castle's accommodation by adding the tower and, in the fashion of the time, the vaulted cellars and vault over the great hall on the first floor." 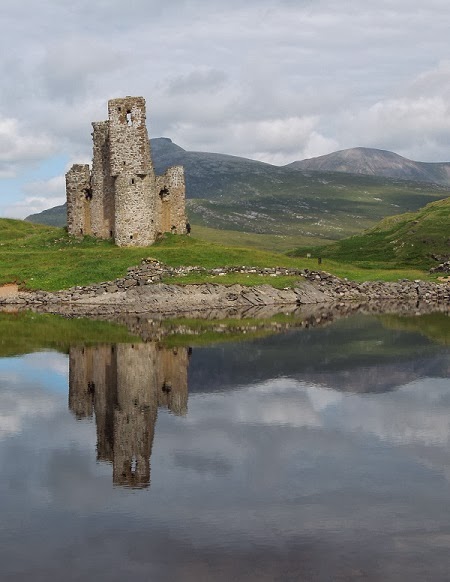 "The stone wall that cuts off the promontory follows the line of an earlier rampart, augmenting the castle's naturally defensive position. Even after Donald Ban's improvements, Ardvreck was still small, requiring other buildings around it to house kitchens, servant's quarters and stables. However, a place was found for Ardvreck's most famous, although unwilling, occupant, James Graham, Marquis of Montrose, imprisoned here in 1650 after his defeat at the Battle of Carbisdale." 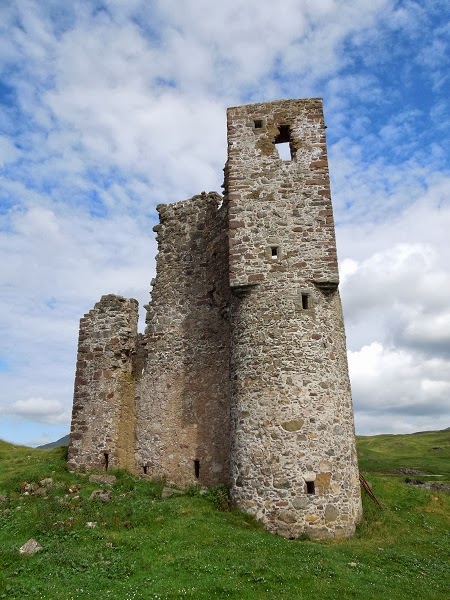 The information from the sign continues: "Throughout its life, Ardvreck was the scene of much violence, with murders, executions, and sieges by both traditional enemies and quarrelsome branches of the MacLeod family. In 1672, a 14-day siege by the MacKenzies of Wester Ross marked the end of MacLeod ownership of Assynt. Nature carried out the final act of violence on the castle in 1795 when it was struck by lightning and largely destroyed.

Many ghosts are said to haunt Ardvreck. The weeping daughter of a MacLeod chief, who drowned in Loch Assynt after marrying the Devil in a pact to save her father's castle, has been seen on the beach, but the tall man in grey, often seen in the ruins, seems to be an altogether happier ghost."

On our first visit to Ardvreck, a misty rain was falling that grew harder so we didn't get to stay long or visit Calda House. On the visit this past year in July, it was a beautiful, sunny, warm day. I didn't even need a jacket. Shocker. :) The blue and green colors here are mesmerizing. It's such a peaceful quiet place, but it also feels a bit sad and lonely to me. I can feel the residual energy of the history that hangs in the air. 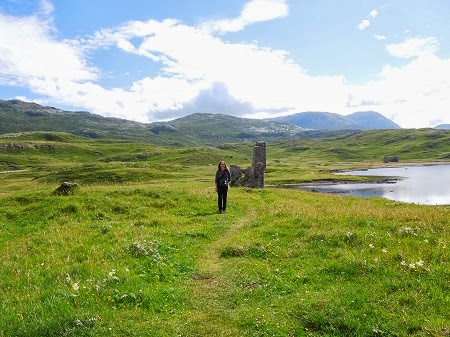 Montrose was later taken to Edinburgh and executed. He was a Royalist fighting on the side of Charles I against the Covenanters. Having lost a battle nearby, he sought refuge with the MacLeods. Neil MacLeod was away and apparently his wife Christine had Montrose imprisoned.


Ardvreck was attacked and taken by the MacKenzie Clan in 1672. They also took all the Assynt lands. They lived here at the castle until 1726 when they built a manor house nearby, Calda House, which also now stands in ruins after a fire in 1737. I'll do a future post about it.

"…how attractive are the stately ruins of Ardvreck, looking us straight in the face as we cross the narrow neck of the peninsula on which they stand! It was without doubt the scene of 'Many a wassail wild and deed of blood'; but now there is not a cat to mew, nor a cock to crow, in the fortress of the Clan MacLeod." Sir John Sinclair, Scenes and Stories of the North of Scotland, 1890.

Hope you enjoyed this visit to Ardvreck Castle.

If you look at the background of my cover, you will see Ardvreck Castle. :)

Thanks to your blog, I am now compiling a list of places to visit in Scotland. :)

I loved the photos, and the diagram of what the castle might have looked like. I'll take the tower room. Tweeted.

Wonderful details! I must make a point of visiting Sutherland and Ross on my next Scotland trip. Putting My Notorious Highlander on my to read list!!

Thanks, Amy! You will love Sutherland and Ross!

I really enjoy visiting Scotland through your pictures. Maybe one day I'll get to go there for real. It's at the top of my list.

Thanks, Clover! So glad you're enjoying my posts! Hope you get to go soon!

This is wonderful! Love the history and the castle pictures.

Thank you so much, Collette!

What a sad yet beautiful place! Thanks for posting

Thank you, Vanessa! It is.

Love the pictures and the info! I especially was grateful you added pictures of what it could have looked like during its prime! Excellent!

Thank you, Lani! The pics on site are good for learning about castles.

Such wonderful pictures, Vonda! Thank you for sharing the history of this castle. Your posts are an inspiration to visit. Gee, maybe you could get a discount for free advertising? LOL

Thank you, Julie!! I'm so glad you enjoyed it. :) I'd love a discount. LOL Hope you get to visit too.

Very interesting. Maybe I can visit the castle on my next trip to Scotland. Thanks for the tour.

Thanks, Brenda! I hope you get to visit Ardvreck!

Always love the pics, Vonda, but way cool to see the images of what the castle might have looked like 'in the day'. Thanks for all of this! Tweeted as well.

Thanks, Lana! So glad you liked it!