Crazy is All About Finding Home - Cate Baylor - Guest Author 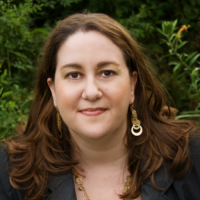 I am the 7th generation of my family to live in Texas. German was spoken in my grandparents’ homes. And we had annual family reunions until about 10 years ago. Then I discovered that with the passing of my grandfather’s generation, my extended family was losing its cohesion, its tradition, its legacy.

This became particularly disheartening to me as I researched my family lineage. It’s gratifying to know my family names going back 13 generations, but that black-and-white chart didn’t tell me what I really wanted to know. What were their lives really like? What was their favorite subject in the few years of school they attended? What were family dinners like? Who was responsible for doing which chores? How did they meet their spouse? What did they dream about?

These questions and this desire to recapture some of my family tradition are what inspired Crazy, the family ranch at the center of my new romance series. A place that’s more than just a place, it’s also the heart of a family. It’s not only the family’s past, but also the family’s future. The people come and go, some related by blood, some by spirit. Crazy symbolizes the hopes of past and future generations because it’s home.

A Crazy Homecoming is Daphne’s story about losing the life she thought she wanted and finding the one she least expected. So I hope you’ll join me and the folks at Crazy to celebrate home, family, community, and of course, love.

Series: Crazy, Texas
Crazy is more than a piece of land. It’s home and hope for family, friends, and even strangers, who need a second chance. Even the hardest hearts soften at Crazy, learning to celebrate home, family, community, and, most of all, love. 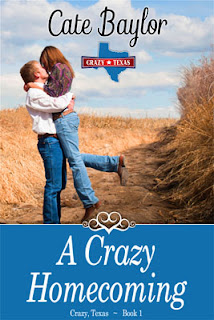 A Crazy Homecoming
Getting fired over a workplace meltdown was bad enough, but getting dumped at the exact same time by her boyfriend-slash-boss was the ultimate humiliation. With no real friends in L.A. and perennially absent parents, Daphne Simms has no one to turn to. To heal her heart, she runs to the only true home she’s ever known—her grandmother’s rural Texas ranch, called Crazy. She knows ranch folks will be a far cry from those she's known in L.A., but she certainly doesn’t expect to be greeted by a cranky cowboy shoving a shotgun in her face.

Mick Williams has lived and worked on Crazy for twenty years. Though he’s utterly devoted to Daphne’s grandmother, he’ll be damned if he’s gonna let a city slicker like Daphne sashay in and disrupt his nice, quiet life. When the future of Crazy is threatened, Mick and Daphne must join forces to keep the ranch afloat, but the heat of their attraction makes working together more complicated than either of them imagines.

When their physical and emotional connection deepens, Mick tries to turn away from the woman he’s convinced he doesn’t deserve, so Daphne has to pull out all the stops to convince him that the heart of Crazy is big enough for the both of them.

At some point during the night, Mick pulled the covers over their bodies and they dozed in each other’s arms. He woke up with Daphne snuggled in to him with her head on his shoulder. As he watched her sleep, he’d never felt so at war with himself.

One side railed against the Mick who was lying in bed next to Daphne, telling him that there was no way that a cowboy with no roots, no real family, no ties would ever be good enough for a woman like her. The other side wanted so badly to stay here in her warm arms, wanted to believe he was good enough, that he almost convinced himself.

He closed his eyes and willed his mind to still. He’d calmed crazed cattle, lived on the streets as a teenager, and survived a druggie mother, why was he scared now?
He was as terrified of losing Daphne as he was of keeping her.

How could he possibly keep her? They had nothing in common except Missus B and Crazy. As much as he loved Missus B, he knew he wasn’t part of the family. She said he was, even Daphne had said he was, but blood runs thick. Being like family wasn’t the same as actually being family.

He was the hired help. Sissy’s jibe had hit so close to home because deep down that was how he felt. And everyone knew the hired help couldn’t live happily ever after with the princess.

Daphne stirred and snuggled into Mick, sighing as she cinched her arm around his waist. With that simple touch, Daphne wiped away any thought he had about living without her. Damn status and family, how was he supposed to walk away? But how could he stay?

He laughed and kissed her hair. “Sorry,” he whispered, stroking her hair and back. “Go back to sleep.”

She propped herself up on her elbow and looked down at Mick. She reached up and gently brushed his tousled hair out of his face. She trailed her fingers over his temple and down his cheek, and he couldn’t help nuzzling into her hand to accept the caress.

He grabbed her hand and kissed her fingers. “Guess I need to shave, huh?”

Her teeth flashed in the darkness when she grinned. “Actually, turns out I’m kinda into the scruffy, outdoorsy type now.”

His heart skipped a beat. Or three. “Daphne…” he started.

“Mick.” She frowned in mock severity.

Absurdly he bristled. “Are you picking a fight while we’re naked in bed?”

He groaned and rolled his eyes. The woman never took anything seriously and he said as much.

Daphne straddled him and braced her palms on his shoulders. “You take things too seriously. What on earth has got you in such a lather so early in the morning?”

He gazed up at her, shrouded in sheets and faint moonlight, with her hair shimmering around her face, and couldn’t think of one damned reason. “I can’t think when you’re on top of me like that,” he admitted.

She leaned back with a coy smile and pushed the sheets off her shoulders, exposing herself fully. “Finally, a fault I can take advantage of.”

Cate Baylor has been a technical communicator for over fifteen years. When she's not writing, she suffers from hobby addiction, which includes (but is not limited to!) reading, jewelry making, crochet, knitting, scrapbooking, cross stitching, and home DIY. She lives in Houston with her geeky husband, three neurotic cats, and precocious Yellow Lab named Tex. She comes from a long line of Texan farmers who are likely rolling over in their graves knowing she’d much rather stay blissfully air-conditioned than suffer outside in the Texas heat. She's a die-hard Texans fan but hasn't decided whether she's willing to embrace the Astros as an American League team


Connect with Cate on her web site or her Facebook page. You’ll also find her author profile on Goodreads and LibraryThing.

Thanks for being our guest today! A Crazy Homecoming is a great book :)

Thanks, Natasha! :) I appreciate the invitation!

Loved the first book in a Crazy series ! Looking forward to more.