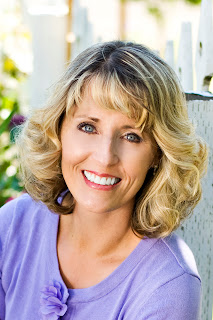 In February 2011, Collette decided to sit down and write a Regency suspense romance with a few Highlander’s thrown in to spice things up a bit. She wrote Highlander’s Hope, the first book in her Blue Rose Trilogy. She has a BS in Liberal Studies and a Master's in Teaching. She's been married for 30 years, has 3 amazing adult children, and 5 dachshunds. Her puppy, Ayva, sits on her lap while she writes. Ayva also nibbles at and lies on the keyboard. Collette loves a good joke, inspirational quotes, flowers, the beach, trivia, birds, shabby chic, and Cadbury Chocolate. You'll always find dogs, birds, quirky—sometimes naughty—humor, and a dash of inspiration in her novels. Her motto for life? You can’t have too much chocolate, too many hugs, or too many flowers. She’s thinking about adding shoes to that list.


Q: Thanks for visiting with us, Collette! Please tell us about your latest release. And do you have a review you could share with us?
A: Thanks so much for having me here today!
Highlander’s Hope released in May, 2013. It’s the first book in my Blue Rose Trilogy. I deliberately created a large cast of characters in the book. Many of the secondary characters get their own books too. 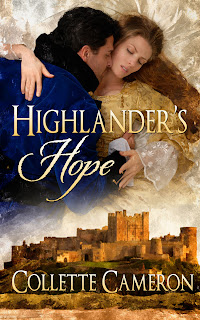 Not a day has gone by that Ewan McTavish, the Viscount Sethwick, hasn't dreamed of the beauty he danced with two years ago. He's determined to win her heart and make her his own. Heiress Yvette Stapleton is certain of one thing; marriage is risky and, therefore, to be avoided. At first, she doesn't recognize the dangerously handsome man who rescues her from assailants on London's docks, but Lord Sethwick's passionate kisses soon have her reconsidering her cynical views on matrimony. On a mission to stop a War Office traitor, Ewan draws Yvette into deadly international intrigue. To protect her, he exploits Scottish law, declaring her his lawful wife—without benefit of a ceremony. Yvette is furious upon discovering the irregular marriage is legally binding, though she never said, "I do." Will Ewan's manipulation cost him her newfound love?

I just got a 5-star and top pick from The Romance Reviews."HIGHLANDER'S HOPE is a merry chase of an action-packed, exciting escape into a lively enjoyable romance ... I rate it five stars but wish I could make it more. It is a wonderful book."


A: A single scene popped into my head one day. It was the Banbury Inn scene where Ewan finds Yvette asleep in his chamber. I built the entire plot around that scene.
Q: Why did you choose your setting and why was it perfect for your book?
A: I wanted to go outside the typical trappings of a Regency and have much of Highlander’s Hope take place in Scotland. Though Ewan is a title English lord, his Scot’s heritage is what drives him.  Some of the niceties of English society were left at the border so that Scot’s boldness and daring could take over.
Q: Sounds fascinating. I love that Scots are daring and bold. :) How do you choose names for your characters?
A: I consider their heritage, occupation, and personalities. Yvette’s mother was French so I wanted Yvette to have a French first name.  For my hero, I wanted a strong Scot’s first name, but I also wanted his English title to be catchy. I thought Sethwick had a nice ring to it.
Mrs. Pettigrove acquired her name because she’s a fussy, petty matron. Her sister, Lady Clutterbuck is a terrible gossip. Ewan’s siblings and cousins all have traditional Scot’s names (Gregor, Dugall,  Callum, Alasdair, Isobel, Seonaid) because they eventually get their own Highlander saga.
I also use family and friends names for middle names because my characters all have at least four names.
Q: Great names! Did you choose the title of your book and if so how did you do it?
A: I’m grinning here.  This is embarrassing, but the original title was Love Hath No Fear. I changed it to Love’s Fearless Embrace, and it still wasn’t right. It wasn’t until I had finished the book, and was in the middle of editing, that I realized one of the driving forces of the plot was Ewan’s ongoing hope that he could make Yvette his.
Q: Sometimes we do have to go through several titles before we find the right one. Please tell us about your favorite character in the book.
A: Adaira Ferguson is my favorite character. Don’t me wrong, I love Yvette. After all, she’s my firstborn heroine, but Addy— Well, Addy is a sassy Scot’s lass that swears, wears breeches, and cares more about her horses than conventions. I love her daring spirit.
Q: Please tell us about your other books.
A: The second book in the trilogy, The Viscount’s Vow, is due to be released in September.
Q: Wonderful! Congratulations! What do you wish you’d known before becoming published?
A: How important critique partners are! Oh, and that writing the book is only the first step. The rest can be daunting to a newbie to the industry.
Q: I agree with you on that. What’s next for you?
A: I’m almost done writing the third book, The Earl’s Enticement.  That’s Addy’s story.
Then I have a stand-alone single title based on a character introduced in The Earl’s Enticement. After that is a 5-6 book Highlander saga,  and another series, all based on characters from Highlander’s Hope.
Q: Wow that's fantastic! Would you like to ask readers a question?
A: I actually have two, if that’s all right. What’s the one thing that makes you pick up a book and devour it, and the one thing that makes you not finish a book?
Highlander’s Hope Excerpt:
Escape.

Yvette stood on unsteady legs, grasping the table’s edge for balance. She strove for poised composure, despite feeling like a powerless pawn in a despicable game of human chess, played for the amusement of those who enjoyed tragic endings at the expense of someone else’s happiness-no-their very existence.

The Great Hall radiated silent tension. All eyes were on her. She looked at the strangers staring at her, their eyes reflecting a myriad of emotions. Embarrassment, horror, dismay, pity, outrage, compassion, and yes—even a few smugly satisfied.

“You knew?” She looked to Hugh and Duncan, before swinging her gaze to Alasdair and Gregor. They bowed their heads in chagrin. Her turbid gaze swept the rest of Ewan’s family.

“You all knew?” Yvette searched Giselle’s sorrowful eyes, then Adaira’s tear-filled ones. “You must think me such a fool.” Her agonized whisper exposed her vulnerability. Her shame. Her absolute humiliation.

She whirled around. “Don’t you touch me,” she hissed between stiff lips.

Yvette knew her gaze was a mirror of desolation when she finally met his eyes. “How could you?” she whispered. “I trusted you.” She’d never make that mistake again.

She slapped away his hand. “Don’t.”

She clenched her teeth to still her quivering mouth and chin. Closing her eyes against the torrent of tears cascading down her face, she drew in a bracing breath.

Lord, give me the strength to walk from this room with my head held high.

On wooden legs, she stepped away from her chair.

Ewan grasped her elbow, restraining her. “Evvy, I don’t know what she told you, but . . .”

***
Highlander's Hope is available at Amazon. Thanks again for being our guest, Collette! I've enjoyed it!

Great interview!!! I tweeted and shared.

What a privilege to be here today!

I see two of my crit partners beat me here. Hi Nancy and Ella! Your time zone is 3 hours ahead of me.

Thanks so much for being our guest, Collette! I enjoyed your interview!