Guest: Pat McDermott and The Band of Roses Trilogy 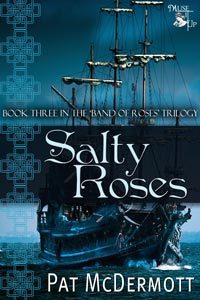 Everyone, please welcome our special guest, Pat McDermott! She will be giving away a copy of Salty Roses to one commenter!

Thank you so much for your hospitality today, Vonda. I can’t think of a better way to visit a “Fierce” blog than to feature a story packed with pirates: Salty Roses, Book Three in my Band of Roses Trilogy. So where did this trilogy come from?

Thanks to my Irish-American family, I once believed that Ireland meant banshees and leprechauns, rebels and ancient kings. As I learned more about Irish history, I found several comments stating that if High King Brian Boru had survived the Battle of Clontarf in 1014 A.D., Ireland would be a very different place today.

I began to wonder… What if he had survived? And then the fun began.

The Band of Roses Trilogy stars the royal Boru clan, still on the throne of Ireland after nearly 1,000 years. The current King Brian upholds ancient traditions, as does his daughter, Crown Princess Talty, though Talty has a knack for landing in trouble. 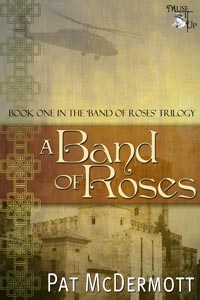 In Book One, A Band of Roses, Talty must conceal her identity to outwit assassins, but she can't conceal her ingrained training as a warrior sworn to protect her homeland. From Japan to an eleventh century Ireland, she finds romance and adventure, yet all she wants is to return to her family and Neil Boru, the adoptive cousin she secretly loves and cannot have—or so she thinks. 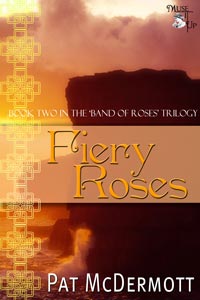 Book Two, Fiery Roses, plunges Ireland’s royal family into a web of blackmail and murder when the residents of rural County Mayo object to plans to run gas pipelines over their land. An arsonist tries to change their minds. One of his fires sends ardent newlyweds Talty and Neil to an ancient Etruscan-like world beset by a waking volcano.

Book Three, Salty Roses, finds Talty overwhelmed by royal duties. She and Neil plan a cruise on a luxury submarine to view old shipwrecks, but treachery lures them to Brittany, where a passage tomb transports them to a world infested with pirates. Talty takes charge of a pirate ship and its mangy crew, while Neil matches wits with a temptress who jeopardizes his wedding vows.

Excerpts from each book are available on my website, but I’ll share one from Salty Roses now.

Neil visits Talty in her Tara Hall office—an office she suspects is haunted.

Muffled thuds whacked the wall on the other side of the door to Talty’s office. Neil cringed at the sound. “How long has she been at it this time, Denis?”

“Not long, sir. Go right in. You’ll be safe enough if you don’t distract her.” From his chair behind his paper-strewn desk, Talty’s ever-smiling assistant spoke cheerfully, as if the strange activity on the other side of the door was the most natural thing in the world.

Neil supposed it was, for Talty. He twisted the bronze doorknob and stole into the room. Talty stood on the far side of her office, her back to him, her right arm rocking, her fingers gripping the glinting blade of a throwing knife. The round red bull’s eye on the wall before her looked like a numberless clock with three black-handled knives set at three, six, and nine. A heart-stopping blur later, a fourth juddering knife neatly filled the twelve o’clock spot.

Neil could throw a blade well enough, had learned it as part of his Fian training. Talty had mastered the skill, and many other martial arts, during her Japanese sojourn several years before. He was proud of her, and more than a little in awe of her Shurikendo proficiency.

These knives, a set of four ten-inch carbon steel blades, had been a Christmas gift from her samurai mentor. She claimed that throwing them not only kept her eye keen and relieved stress, it had also helped her regain her sleek, thoroughbred, pre-baby shape.

“So,” she said, still facing the target. “Are you enjoying the show?”

She turned so fast he nearly ducked. “Neil! I didn’t…I’m…How are you?”

If she hadn’t known he was there, to whom had she been speaking? He crossed the room and kissed her. “Having a tough day, love?”

“Tough? Of course not.” She plucked the knives from the target, set them on the table, and prepared to throw them again. “I thought my father being back would help lighten my schedule. So I can see my son before he—” Thwack! The first knife pierced the target dead center. “—forgets who I am. And where is my father? In his office with his tailor, looking over swatches of material for new suits. ‘We’re still on vacation, Tal,’ he says. I couldn’t stand that hot sun anymore,’ he says. ‘So I’m taking your mother—’” Thwack! “‘—to Scotland for a week!’” Thwack! Thwack! The knives quivered on the target in a neat vertical row.

Neil stared in admiration. He knew from stolen ISF reports that Talty’s deadly aim had saved more than one life. “Did you tell Uncle-Dad about our submarine outing next Wednesday?”

Again, she pulled the knives from the target, this time carrying them to the wall safe where she kept them. “Yes. He said it was a great idea. Said it’s about time I learned to manage my schedule.”

She stopped. “What? You know very well this isn’t my normal schedule!” Her tone was indignant, her face flushed.

Quickly closing the gap between them, Neil caressed her soft auburn hair. “Tal, what if, God forbid, something happened to your father and it was your normal schedule?”

She met his gaze and sighed. “Then I’d make some serious adjustments. But I’m thinking, Neily. We shouldn’t go on this submarine cruise Wednesday. We should spend the day with the baby.”

“We’ve already agreed to go. It’s only for a few hours. Donal is perfectly safe with Nanny Maude.”

“He’ll think Maude is his mother. He won’t remember me!”

“Hell, you’re so busy, I don’t even remember you.” He’d said it to make her laugh, but she looked as if she’d either start crying or tossing those knives at him. Hustling to derail either development, he squeezed her shoulders and kissed her. “We both grew up with nannies, Tal. It did us no harm, and we both love our parents.”

In true Boru fashion, her tiny pout curved into a spectacular smile. She placed the weapons in the wall safe. As she shut the hinged portrait of some medieval Boru prince over the safe, she spoke to the oil painting: “What are you looking at?”

“Tal, are you all right? How long have you been tossing knives?”

Still smiling, she turned from the portrait. “For years, Neily.”

“I know that! I meant today. You’re talking to people who aren’t here, darlin’.”

“Am I?” She returned to the bull’s eye and closed the small double doors that concealed it. When she’d first found the old dartboard hidden in the paneling, Neil had helped her transform the secret recess into a training target. Besides himself and Talty, only Denis knew her elegant office housed the setup.

“I’ve been practicing about fifteen minutes,” she said. “Not long enough.” She approached him with one side of her mouth turned up in a provocative smile he knew well. “Did you have some substitute activity in mind?”

His arms slid around her, and hers around him. Her thigh-pressing hug left him struggling to remember why he’d come to see her. “And they call us poor fellas rascals.” 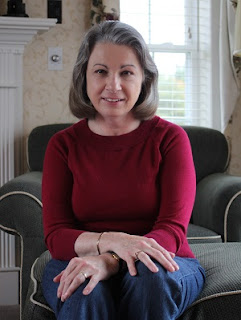 Pat’s Bio:
Boston, Massachusetts native Pat McDermott writes romantic action/adventure stories set in an Ireland that might have been. Autumn Glimmer, a young adult paranormal adventure featuring Ireland’s fairies, is the sequel to Glancing Through the Glimmer. Both books are “prequels” to her Band of Roses Trilogy. She is currently working on a contemporary romance set in Ireland.

Thank you for being our guest today, Pat!
Pat is giving away an ebook copy of Salty Roses to one lucky commenter! Please leave a comment and your email addy to enter.
Thanks!!
Vonda
By Vonda Sinclair at April 16, 2013
Email ThisBlogThis!Share to TwitterShare to FacebookShare to Pinterest
Labels: Band of Roses Trilogy, Ireland, Irish history, Pat McDermott

Thanks for the warm welcome, Vonda. I'm delighted to be visiting the Fierce Romance blog today!

What a great concept! This sounds like an awesome series. I'll have to check it out.

I am looking forward to your books, Pat!

Tammy, I love your enthusiasm. Thanks for dropping by!

Thank you, Gerri! Always great to see you :-)

Thank you for being here, Pat! I enjoyed your post and excerpt!

Just finishing Autumn Glimmer, will be starting Band of Roses soon. I hope it will be as good a read.

Love the excerpt, Pat. Talty and Neil have a way of staying in your head and making you want to read more. :)

Vonda, I'm delighted to be here. A great "Home-From-Home" for a day!

Moserod, I'm so happy you enjoyed Autumn Glimmer. As you know, it's a YA featuring Ireland's fairies, and a "prequel" to A Band of Roses. No fairies in the "Roses" books, but I suspect you'll enjoy the first book. Let me know, and thanks for stopping by!

Dawn, Talty and Neil have a way of making me want to write more :-) Glad you liked the excerpt. Wonderful to see you!

Wonderful excerpt! I look forward to reading it!

Glad you enjoyed it, Lana. Thanks so much for leaving a comment!

Vonda, thanks again for your Fiercely warm hospitality. I've done a roll of the dice, and Gerri Bowen is the winner of my Giveaway. Congrats, Gerri, and my sincere thanks to everyone who stopped by to visit my Roses and me. Best of the best to you all!

Congratulations, Gerri! And thanks again, Pat, for visiting with us!