As a writer, I get asked this question more than any other: “Where do you get your ideas?” (My second most often asked question, by the way, is “When are you going to get a real job?” – but that’s a topic for a different post.)

I admit, even though I’ve been published for ten years, and writing full time for two of those, I still get stumped by this question. My honest answer – “Everywhere!” – doesn’t satisfy people. They think there’s some cosmic secret and I’m not willing to share. But the truth is, I really do get my ideas from everywhere.

I’ve written books based on a grain of inspiration I grabbed out of a bit of overheard conversation. I subscribe to magazines like The Smithsonian for no other reason than it’s an amazing idea mine. I recently wrote a book featuring a reality TV star, which came out of my love for all things reality TV. (Don’t judge me – you’ve got guilty pleasures too!) 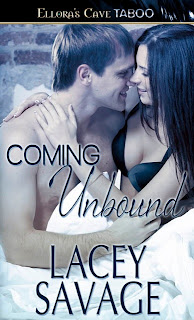 Or, if they’re not careful, possibly just break Ginny.

Thanks so much for having me here, Natasha! And I love that cover, too... In fact, I love every cover I've ever had from EC. They've got tremendously talented cover artists over there -- and some very hot models!