After the release of Plaything, book #4 in my Paolo's Playhouse series from Samhain, I was asked to write more about Paolo and Julianne. In Plaything, they meet for the first time, in an intense scene of bondage sex at the Playhouse. Paolo, who made an appearance in each of the first three stories, finds the first woman in a long time who intrigues and delights him. The story ends with them planning to meet again. 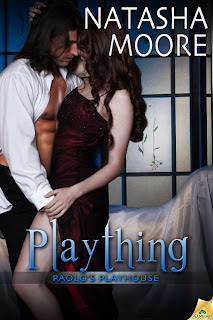 It was more of a challenge than I thought it would be to write this story. I already knew these characters, I already loved these characters, so how hard could it be to write a story where they fall in love? I do it all the time, right? But I never realized the constrictions of taking two people I never expected to write about again, use the characteristics and plot points already laid out in the original story, and go from there.

It was all my fault. I made it hard on myself. After complaining about all the things I couldn't do with the story because of the way it was set up in Plaything, I finally embraced what I COULD do. Once I did that, things went much more smoothly. (We won't talk about the sub-plot I tried to add that didn't work and had to be ripped out.) All of this added more time to what it took to complete the project, but I'm happy to say I just signed the contract for Playing for Real and the book will be coming out early in 2014.

Here's a rough blurb to give you an idea of what will happen to that sexy Italian in Playing for Real:

Dominant Paolo Mancini wants to settle down into a committed relationship with a submissive he can love and care for. After a failed marriage and a string of short-term relationships, he’s pretty much given up on finding the perfect woman. Then Julianne Barnes comes to his playhouse for one night of bondage sex and she blows him away with her beauty and sass and bravery. He thinks he may have found the sub he’s been looking for. He yearns to show her how to weave bondage and submission into her life, and hopefully into his.

Julianne has always fantasized about soft ropes and dark blindfolds and strong fingers wrapped around her wrists. But just because she craves bondage doesn’t mean she wants to submit to a man in her “real” life. She’s a successful businesswoman and can take care of herself. But Paolo is so sexy, so seductive, she quickly finds herself under his spell. Soon, just hearing his lyrical voice, that silky tone with the steel beneath, makes her sex clench and her soul submit.

But while Julianne tries to keep her time with the sexy Italian separate from the rest of her life, Paolo is determined to show her that he’s playing for real.


I'll be sharing the cover, official blurb, and release date once they become available.

Have a great week!