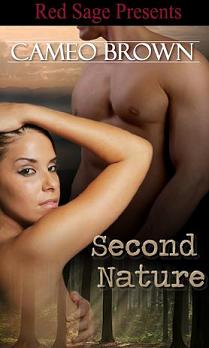 Happy Spring! I think it's finally here, and I'm thrilled. It's one of my favorite seasons, the other three being summer, autumn, and winter. :)

I do love all the seasons, each one for its own special contribution to the beauty of our dynamic earth. If I sound like a nature lover, it's because I am, so much so that I wrote an erotic romance, Second Nature, set mostly in the forest in which an environmental activist tries to resist the advances of an arrogant developer who is not what he appears to be. It's one of my first published novellas and was one of my favorites to write because of the nature theme and the abundance of passion Graham and Claret share, even when she despises him and all she thinks he represents.

In honor of spring, and since April 22nd is Earth Day, I thought I'd share the description and an excerpt from Second Nature in case anyone is in a green mood and looking for a red-hot read. :)


DESCRIPTION:
"Mate with me."
This is the insistent demand wealthy tycoon Graham Norton makes on passionate activist Claret McDaniel. Never, "Make love to me." Never, "Let's have sex," or even a crass, "Let's do it, baby."
But whenever he sees her, whenever they meet to argue over his recent land development plans to destroy her beloved forest, the only place she feels at home, Graham urges Claret, "Mate with me."
And all of Claret's attempts to remain professional and pure are slowly melting away under the persuasive gleam in his eyes. She begins to sense under his carefully groomed businessman's exterior beats an untamed heart. There's something primitive about Graham. Something mythical. Something not entirely human. And whatever it is, she is about to find, deep within her unnatural human body...its mate.


“You know, Claret, you could stop this if you wanted to.”
Graham Norton’s hand reached for Claret’s, and she instinctively pulled it from the table, settling it gently in her lap. His intense gaze shot fire through her, but she straightened in her chair and cleared her throat.
“Mr. Graham, I have told you before that I am not interested in using those types of methods to convince you to change your development plans. If you met with me tonight thinking I would give in this time, you were wrong. Again.” Claret finished her practiced speech, her voice sounding even and polished, although her insides quivered and her throat felt suddenly parched. It was probably all the throat-clearing she had done throughout dinner.
Claret forgot the danger sitting across from her and reached for her water glass, but with one deft move, Graham clasped her hand in his and offered a sinister smile.
“Why not?” he questioned her, his thumb finding the tender spot on her freckled wrist where her pulse throbbed. “Why not mate with me tonight and let me show you what you are missing, what you have missed for most of your life?”  His thumb rubbed gently across her soft skin in time with her heartbeat, which quickened at an alarming pace.
Claret shook her head and sighed, trying to pull her hand from its warm embrace. She had long given up trying to figure out why Graham’s arrogance allowed him to think that mating with him would be the highlight of any girl’s life. He was oddly handsome, yes, with dark chestnut hair that neatly curled above his ears, and the most sensual amber brown eyes she had ever seen. But really, did he think Claret was so inexperienced that she’d climaxed before?
And mate with him--why did he always say that way? He never said “have sex” or “do it” or “enjoy carnal bliss” or anything different. It was always “mate with me.”  Claret shook her head again. Why did she even come tonight? Did she really think that this time he'd would offer anything but another invitation to his bed?
“Claret, do you want to know a secret?”
Claret rolled her eyes and tried to tug her hand away, but Graham’s grip was strong. Gentle, but very strong. Her heart began to pound.
“Your eyes are like the greenest emeralds—I dreamt about them the other night, you know. And do have any idea how much I envy those black waves that tickle your face and neck? Your pixie cut suits you, Claret. Won’t you be my pixie tonight? I need you.”
Graham intensified his attentions at her wrist, and his steady gaze, infused with an odd hunger that intrigued and challenged her, caused her to shift uncomfortably in her seat to relieve the slight pressure she had begun to feel between her thighs.
“Mr. Norton, tell me one thing,” Claret started, trying to draw his attentions away from her wrist and back to their conversation.
“Anything you wish, Claret.” Graham’s response was filled with mirth. He was humoring her.
“You are not unattractive, as I am sure you have noticed every woman in her staring at you throughout our meal.” An amused smile played across Graham’s face and his eyes flickered dangerously. “So I don’t understand why you can’t just bang one of them? Why does it have to be me? What is it? Haven’t you ever had an activist before?”
Graham stopped rubbing her wrist and sat back in his seat, his hand lightly touching her fingers and his gaze as intense as ever. That’s one for me, thought Claret. Graham Norton hated coarse language; she had figured that much out over the last few months, and he especially seemed to not like it coming from her. Finally, after a minute, he spoke.
“That’s common, Claret, and not like you at all. I offer you something beautiful and you try to make it ugly. Was the idea of mating with me beginning to appeal to you that much that you had to make it seem so…so human?”
By Cameo Brown at April 18, 2013
Email ThisBlogThis!Share to TwitterShare to FacebookShare to Pinterest
Labels: Cameo Brown, Earth Day, eRed Sage, nature, nature spirit, Red Sage Publishing, Second Nature