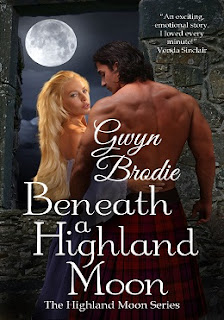 Gwyn Brodie loves Scotland, its amazing history, its wonderful people, and travels there whenever she can. While in Scotland she enjoys learning about her ancestors the Murray, Clark, Boyd, Ramsey and McTavish clans. She lives with her husband in the beautiful mountains of North Carolina and besides writing Scottish historical romance, she also loves gardening, reading and refinishing old furniture.

Q: Welcome, Gwyn! Please tell us about your new release.
A: Beneath a Highland Moon is Book 1 of The Highland Moon Series. After her clan's castle falls under siege, the fair-haired Lady Jillian MacRae finds a way to escape with her four-year-old brother, seeking help from the handsome Kade MacLachlan, laird and master of Ravenskull Castle. Four years past their love had been strong—until her father betrothed her to another man who was later killed. Now, it is Kade she turns to for help in regaining control of her own castle from the wicked man who has taken over and intends to marry her. Once she is again face-to-face with Kade, she realizes the love she thought she'd put aside is alive and thriving.
Kade is speechless when the beautiful Jillian offers herself to him in exchange for protecting her young brother and banishing the intruders from her castle—an offer he is more than willing to accept. He has no intention of allowing her to slip through his fingers again. And when her life hangs in the balance, he will not let anything—or anyone—stop him from saving her, even as his own life dangles by a thread.
Q: This is a wonderful book! (I know because I read it twice. :)) What inspired this story?
A: Thanks! I have always loved reading Scottish historical romance, and decided to create my own series of Highlanders.  I love everything about Scotland and enjoy traveling there whenever I have the chance.
Q: Why do you write romance?
A: I write—and read—romance because I like the emotional connection between the hero and heroine. And you always know beforehand that sooner-or-later, everything will turn out okay.
Q: That's true. I love the happily-ever-after. What do you enjoy most about writing?
A: When I'm writing, It feels like I become a part of the world I'm writing about, in some way. And I like that.
Q: How did your story’s setting impact your plot or characters?
A: Since the setting is 1600's Scottish Highlands, the language, clothing, customs, everything, was impacted by the setting.
Q: Why did you choose this setting and why was it perfect for your book?
A: I wanted the setting to be in the 1600's and in Scotland. I just needed to make everything else fit that particular setting.
Q: Which of your characters is most like you? Least like you? And why?
A: I would hope to be a bit like Lady Jillian, not in appearance or age, but I wanted her to be a strong female character.
Gordon MacRae is the least like me.  He's a nasty fellow!
Q: That's for sure. How do you choose names for your characters?
A: I wanted to use old Scottish, Gaelic, or Celtic names. I searched different sites until I found names that seemed to fit my characters.
Q: Did you choose the title of your book and if so how did you do it?
A: Yes, I chose it, for no particular reason. It just came to me and I liked it.
Q: Where is your favorite place in the world?
A: Scotland. I live in the mountains of Western North Carolina, and love it here. But I would also love to live in Scotland for several months a year.
Q: I would too! Please tell us about your favorite character in the book.
A: I have two favorites, Jillian and Kade. They both have been through a lot.
Q: Which part of this story is your favorite?
A: Probably Jillian's escape and then her kidnapping by the villain.  I also really like when Kade rescues her.
Q: Which element of this story was the hardest for you?
A: The more intimate scenes between Jillian and Kade. I spent a lot of time trying to get them just right.
Q: What inspires you? What motivates you?
A: I think wanting to write—and have people read--about love, romance and happiness inspires me and motivates me. And learning things I didn't know while researching also inspires me by giving me fresh ideas to put into my story.
Q: Please tell us about the next book in the series.
A: Book 2, Galen's story, of The Highand Moon Series, Once in a Highland Moon, will be coming out in the fall of 2013.
Q: When did you know you wanted to be an author?
A: For as long as I can remember. I used to tell my younger sisters stories I made up. I would write poems and little stories all the time.
Q: What is your writing process or method?
A: I tend to write scenes that I want to use and decide later where they should go exactly, adding them as I write and as they fit the story line.
Q: Please describe your journey to publication.
A: I've been published in several magazines, but Beneath a Highland Moon is my first novel. I quickly found out it is one thing to write a short story, but another to do a full-length book.
Q: What was the most important thing you learned (the thing that made all the difference) just before your book was released?
A: Proving to myself that I could do it! And now that I know I can, I don't intend to stop writing anytime soon.
Q: Yay!! What do you wish you’d known before becoming published?
A: That if you don't start, you won't finish. I regret that I waited so long to do it!
Q: Do you have any advice for unpublished authors?
A: Yes. Don't give up, never give up!
Q: What’s next for you?
A: At least three, maybe four, more books in The Highland Moon Series.
Q: Would you like to ask readers a question?


A:  Yes, what do you like most about Scottish historical romance?

Everyone, please remember to answer this question or leave a comment along with a way to contact you if you are entering to win Gwyn's book. Thanks! Also please check out this romantic excerpt!

I love the Excerpt of Beneath a Highland Moon! What I like most of Scottish romance is the time period and their Highlanders. Under a rugged and fierce Warrior, is a gentle and romantic man. In front of their clan, they are strong and powerful Highlander, but when they find themselves in front of a beautiful heroine, they crumble. I just love Scottish romance and would like to read your first book which Vonda Sinclair recommends!
nlaverdure88@videotron.ca

What a wonderful interview. I loved the excerpt.
ellaquinnauthor at hotmail dot com

What do I like most about Scottish Historical Romance?
Braw Scotsmen, especially in kilts. Also descriptions of beautiful Scotland that take me back to the places I've visited there.

Welcome, Gwyn! Thanks for being our guest today!

Thanks so much, everyone, for commenting! Gwyn is at work today, but she will drop in later this afternoon to comment.

ellaquinnauthor, thank you for your great comment about the interview. I enjoyed doing it. I'm also glad you liked the excerpt.

Thanks, Mairi. I enjoyed doing it! Nothing like a man in a kilt, I always say! But I love the Scottish castles and the amazing views as well.

Thanks, Vonda, for having me as your guest. I've enjoyed it!

Keep writing those great Highlander books of yours! I've read them all and waiting for the next!

Thanks, Nicole. I love your comment on the traits of a Highlander, their strength, loyalty, gentleness, love etc. These are the traits I want the Highland hero's in my books to possess.

Thanks, Gwyn!! I appreciate you reading them all! :)

How fun getting to know you today, Gwyn. What do I like most about Scottish romances - everything Scottish. I left my heart in Scotland and love the history, the scenery, the Highlanders...everything but the haggis.

Your book sounds really interesting, Gwyn. I'll have to check it out. I love your cover, too! :-)

Paisley, thank you for your comment! I actually like the haggis. I had a chicken breast stuffed with haggis prepared in a whisky cream sauce. It was delicious!

Thank, Vanessa, I really like the cover too. I think it really fits my book. Someone created it for me and I think they did a great job!

The big strong honorable Scottish man in a kilt. What's not to love. They love, cherish and protect the ones they love

You've hit it right on the nose, Anonymous! The perfect man!

It is a romantic excerpt thank you & I thoroughly enjoyed the post.

Thank you, Mary. I enjoyed doing it! I'm glad you liked the post as well!

Congratulations to Nicole, for being the winner of the ebook, Beneath a Highland Moon. Hope you enjoy!

Congratulations on winning the copy of "Beneath A Highland Moon", Nicole. (I'm jealous, LOL, but I will be getting a copy of my own, soon.)
Màiri Norris