I totally forgot to blog last week and I apologize for that. I'm on a double blog tour right now and blogs are coming out my eyeballs :) There have been days I haven't been sure if I'm coming or going, lol. So I've had two book release in the last four days. Extreme Love is from Entangled Select. 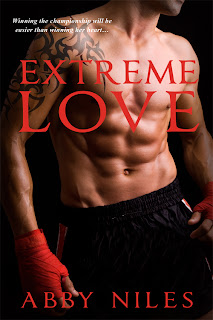 Used to the average Joe, Caitlyn Moore is overwhelmed when the supremely masculine Dante Jones walks into her life and expresses an interest in her. At first she pushes him away, refusing to encourage the attention of a cage fighter. Then she learns Dante has a love ‘em and leave ‘em reputation. What better way to fine-tune her non-existent flirting skills than with a male who won’t stick around? But Dante has no intention of being a practice dummy; he’s out for all or nothing. Now Caitlyn must accept Dante—violent career and all—or let him go.

Dante “Inferno” Jones has one goal: win the Welterweight Championship. At a time when focus is crucial, the last thing he needs is a distraction. Yet Caitlyn Moore becomes a challenge he can’t resist. When the light-hearted pursuit shifts to a battle to win her heart, his focus is shot. Faced with losing the biggest match of his career, Dante must decide if his extreme life also has room for Extreme Love.


Extreme Love is the first book of a three book series. Fighting Love is slotted for release in December and follows Tommy and Julie. A best friends to lovers romance. I love those :) I've yet to start the third book, but I can't wait to dig in. It's going to require a ton of research, and I'm a little intimidated by the project, but it's going to be KILLER!!
I think I've shared a lot about Extreme on here, but I think I've been pretty quiet about my other release. It's from Entangled Covet The Awakening: Aidan. Shifter romance with my special spin. Annnnnnd I'm having technical difficulties. Sigh. Okay, there we go... 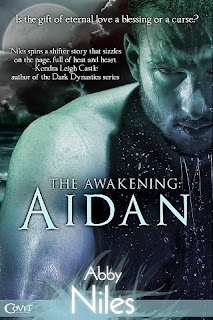 Is the gift of eternal love a blessing or a curse?

After years of counseling grieving shifters, psychiatrist and half-shifter, Dr. Jaylin Avgar has become jaded on shifter mating. She wants to marry a human and forget about the love for eternity crap. Then she meets Aidan O’Connell, an infuriatingly laid back shifter who represents everything she doesn’t want. Yet, the more he pursues her, the more she craves a future with him. Only one thing stands in her way: death. Can she overcome her fear of losing Aidan to the one guarantee in life?

Millionaire consultant, Aidan O’Connell knows he’ll one day meet a woman who’ll awaken an unrelenting mating instinct. Unfortunately, that woman is Jaylin, who has no qualms about telling him that he and his so-called eternity can shove it. When she pushes him away, he takes a drastic step so she can no longer escape. The close proximity throws the instinct into overdrive. Can he control the need engrained in him until he’s certain she will reciprocate the bond, or will a moment of weakness doom him to hell on earth?
Buy Links:
Amazon and Barnes and Noble

Another two books will follow this one. I'm finishing up the third book now. I've had to put it on hold since the tours are taking up most of my time. I was seriously within a day of sending it to my editor, lol. I love this series. Love this world I've built. Liam story is gritty and Britton's, well I'll just say, his story was probably my favorite of the three. Shhhhhh. Don't tell Liam and Aidan.

Anyway, I have a ton more blogs to write today! Hope you guys have a great week!!
Abby