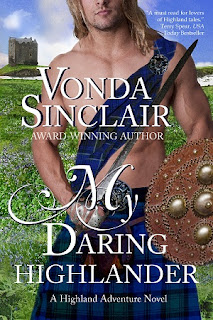 Hi, everyone, I'm thrilled that my latest release is out! My Daring Highlander is the 4th book in my Highland Adventure series.
***
Beautiful and fiercely protective of those she loves, Lady Seona Murray captured Keegan MacKay’s attention when she first set foot in Dunnakeil Castle. Though she is a chief’s daughter and forbidden, Keegan has fallen in love with her from afar and burns to possess her. But so does the clan traitor, Haldane, an obsessive outlaw bent on murder and kidnapping.

Sinfully handsome, Keegan MacKay is a fearsome guard as well as the chief’s cousin, but Seona’s father would never consider him a worthy husband for her because he is not a titled laird. Seona has secretly watched the sensual, tawny-haired warrior from across the crowded great hall for months, but when he is tasked with escorting her across Scotland, back to her home, their simmering attraction flames into sizzling passion with just one kiss.

Though she fears she is endangering Keegan’s life, Seona cannot resist his seductive charm or his spellbinding kisses. Keegan sets fire to the memories of her sad past and shows her what it means to truly live. But her father has other plans. He’s arranged for her to marry a wealthy Lowland laird. Is Keegan daring enough to steal her away? Or will the vindictive Haldane snatch her first?

What will Keegan do to warm Seona up? :)

My Daring Highlander is available at Amazon, B&N, Smashwords and will be distributed to other book retailers soon.

In other news, My Wild Highlander was nominated by a wonderful reviewer for an Indie Romance Convention Readers Choice Award. In order to win, I need more votes. If you've read My Wild Highlander and enjoyed it, I could use your help. Voting is easy, just two clicks. Vote for historical romance by visiting this website. If you would like to vote in all categories visit the main website. Thank you!! 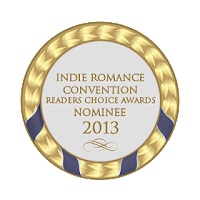 Thank you, Ella! I appreciate it!

I enjoyed the excerpt! I'm falling in love with your stories just from the covers. They are fantastic! Do you do your own cover art? Good luck with this newest title in your series!

Thanks, Gemma!! Yes, I do my cover art. I enjoy it but it's a challenge sometimes. :)

Awesome excerpt, Vonda!!! Can't wait to read this one!! I love your highlanders!

Thanks so much, Abby!!

Oh I didn't know this one was out? Awesome. Love the excerpt :)